A Nation Shamed - and the mafia marches on 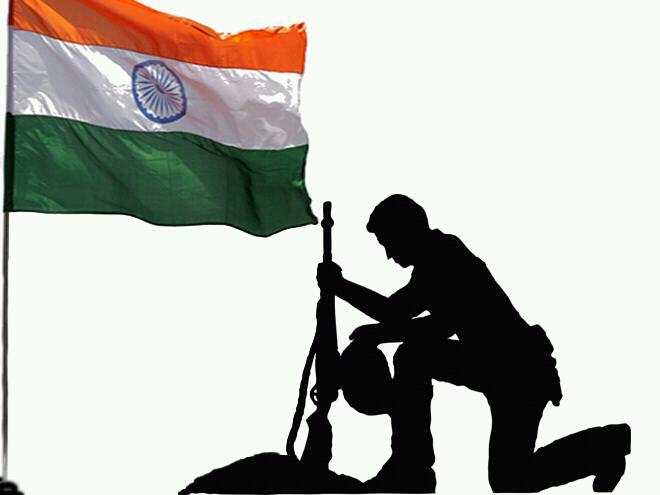 Early last year, the former COAS, Gen VK Singh (now MoS in the Modi government) went to lay a wreath at the Amar Jawan Jyoti at India Gate accompanied by 7-8 veteran General Officers – all wearing their regimental side caps and some even their medals. Army Headquarters, or shall we say the misnomer Integrated HQ of MoD (Army) had been informed in advance and so a serving Colonel from Ceremonials and Welfare Directorate of Army HQ was present at the site. But as the veterans came forward to lay the wreath, a company of baton wielding police accompanied with water cannon fitted vehicles charged forward.

This is not the first time that veterans have protested for OROP at Jantar Mantar. On earlier occasion, veterans even returned their medals and gallantry awards to the President, with letters written in their blood.

A police officer curtly told Gen VK Singh that the wreath cannot be laid because the inner sanctum of the Amar Jawan Jyoti is with MHA whose permission had not been obtained. As this conversation was on, the water cannons opened up, much to the amazement of people visiting India Gate including a host of foreigners who even asked what on earth was happening.

Needless to mention that the MHA permission bit came as a surprise. Logically, if a former Chief informs his Service HQ that he wants to lay a wreath at the Amar Jawan Jyoti, Army HQ should have made all arrangements including required permission from MHA. But then Gen VK Singh was later to join BJP and he as COAS had been succeeded by the ‘chosen one’, so it was but expected. Same evening during a debate on NDTV, I was asked if I was scared by the police charge, since I was present at India Gate in the morning?

My response was that it was amusing (not scary) to note here was a Home Minister ordering water cannons on veteran officers while he was scared stiff when the Chinese made a 19 km deep intrusion at Raki Nala in Depsang area of Ladakh, held by ITBP directly under his command, and even croaked a scary scandalous statement in Parliament “we have no jurisdiction in the area”.

The media now reveals this same now former Home Minister, Sushil Shinde, not only enjoys the same security cover as Home Minister but security cover has also been extended to his wife, three daughters and even the grandchildren. How many more politicians like him are enjoying such illegal perks on public money is anyone’s guess. But then isn’t this another form of corruption and shouldn’t corruption be part and parcel of the Swachh Bharat Abhiyan?

…something totally unexpected under the present government happened at Jantar Mantar on August 14, when Delhi Police and CRPF charged the peacefully protesting veterans in a bid to evict them from the venue.

Now take the nautanki at Jantar Mantar in the days preceding August 15. The likes of Rahul Gandhi, Kejriwal and Co merely wanted to make political mileage of the situation as they had not even squeaked a word against the above mentioned incident at India Gate last year. Besides, Rahul’s party has been largely responsible for lowering the prestige, pay and allowances of the military over the decades, even to the point of ridiculing war widows, war disabled and veterans. This is not the first time that veterans have protested for OROP at Jantar Mantar.

On earlier occasion, veterans even returned their medals and gallantry awards to the President, with letters written in their blood. That the President, as Supreme Commander, never even met their representatives too is well known. Referring to the recent letter titled ‘Open Letter to Rashtrapati: A WARNING TO THE NATION’ by four former Service Chiefs to the President recently concerning OROP, Devasahayam MG, former Secretary GoI and former army officer writes, “Sorry to sound cynical. Wonder whether you know what the former Supreme Commander did when nearly 1500 veterans who included Lt. Generals, Vice Admirals, Air Marshals and ORs and some civilians including the humble undersigned signed a very well articulated representation against the fraud played on General VK Singh in the name of ‘disputed’ DoB and a delegation comprising of couple of top-ranking veterans and one civilian sought appointment to submit the representation to her. President’s office gave appointment thrice and at the last moment this ‘lady’ got it cancelled.

On one occasion the delegation had got into the Rashtrapati Bhavan forecourt when they received a call that appointment was cancelled. We found out later that this act of cowardice was due to the greed of this lady to get tenure as President and she did not want to annoy the powers-that-be in any manner. Some Supreme Commander this!”

…many theories are now circulating like: Modi is not in full control; there are two power centres within the BJP; the power centre controlling the inflow of foreign funds is the more powerful one with its mafia links…

But then something totally unexpected under the present government happened at Jantar Mantar on August 14, when Delhi Police and CRPF charged the peacefully protesting veterans in a bid to evict them from the venue. The media had a field day covering the most unfortunate scuffle, shown live on many media channels. The veterans asked if they were a security threat and desperately tried to contact Bassi, the Delhi Police Commissioner who conveniently refused to take any calls.

The following photograph of an old veteran with his medals (that ostensibly are awarded by the President, the Supreme Commander) torn off his shirt has been going viral, some even demanding that people responsible should touch his feet and apologize but then who is bothered in the hierarchy about such incident which would shame any other nation. There have been angry remarks that the Delhi Police and CRPF are responsible but then tell me if they were not acting on the orders of the Home Minister, with approval of the Prime Minister. 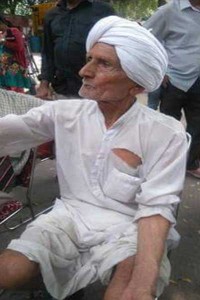 Here the issue is not propriety or impropriety of protesting at Jantar Mantar against non-implementation of OROP but why police forces were launched against peacefully protesting veterans. The bottom-line is that by doing so the stature of the PM and the HM has certainly reduced by this action unless they can come up with a plausible explanation. More significantly, it is little known that had MoS General  V K Singh who intervened on August 14 against Police action at Jantar Mantar and got the veterans’ agitation restored, with his personal staff running around and securing the permissions for veterans to continue their agitation gracefully, the damage would have been much more, as intended by the mafia.

Modi’s August 15 announcement of the issue being under discussion and Parrikar’s repetitions of ‘being committed’ and ‘coming soon’ cuts little ice in the backdrop of the governments publicity that here is a Prime Minister who personally demands a progress report from all the MoS every 100 days. How come then he cannot resolve the ‘jatil samasya’ of a mere some Rs 8,330 crores OROP after 15 months in office when the government surrendered Rs 6000 crores from last year’s defence budget, another Rs 1000 crores allotted for the National War Memorial lapsed, claimed during the 2013 ESM rally at Rewari that OROP would have been implemented in 2004 if BJP was in power, and the BJP President committing to representatives of the ESM that OROP would be announced within 10 days.

It can now be said ‘Na Cheen ne na Pakistan ne, apne fauj ko barbad kiya Hindustan ne’. A dissatisfied military is not in the interest of any nation least of all India…

So it is but natural that many theories are now circulating like: Modi is not in full control; there are two power centres within the BJP; the power centre controlling the inflow of foreign funds is the more powerful one with its mafia links, and; the because of fiscal needs of future elections perforce Modi has to toe the line.

Notwithstanding the above, it is an established fact that while governments come and governments go, the mafia that orchestrates this country on behest of foreign powers have ensured that the defence of India remains largely defunct; keeping the military away from strategic policy formulation, higher defence organizations remaining outdated sans military advice, keeping the military underequipped, divided and under misdirected civilian rule of bureaucracy, not the political hierarchy as it should be. The much needed administrative reforms don’t appear to be part of the government’s agenda anyway. Make in India, which is yet to take off in the defence sector anyway is not the be all and end all of defending India, much that the unaccountable MoD bureaucracy may want the political hierarchy to believe.

When PM Modi asked the public suggestions for his Independence Day speech, I suggested he declares his intention of reorganizing the higher defence set up of the country including the MoD and ordering a comprehensive defence review. Unfortunately, the Defence Minister too has made no move whatsoever in this direction. The mafia obviously is too strong for the hierarchy to understand that belittling the veterans in turn amounts to belittling the military. Lt Gen NS Brar, former Deputy Chief Integrated Defence Staff and Member Armed Forces Tribunal writes, “Our polity by design and default has proceeded to politicize, downgrade and demoralize its own armed forces and veterans.

As Bahadur Shah Zafar wrote after 1857 ;’Na Shah Iran ne na Czar Roos ne, Angres ko bardad kiya kartoos ne’. It can now be said ‘Na Cheen ne na Pakistan ne, apne fauj ko barbad kiya Hindustan ne’. A dissatisfied military is not in the interest of any nation least of all India which has to contend with multifarious internal and external security issues. The nation at large and the political leadership must be alive to the prevailing sentiments and act appropriately lest the gates of military stations are opened”.

The Prime Minister needs to take a call if he wants to continue in the same wake as the last government in matters of defence including installing a puppet permanent chairman COSC or move beyond ‘Make in India’ and make a difference.

29 thoughts on “A Nation Shamed – and the mafia marches on”