A mighty 'peaceful' China and the Indian border 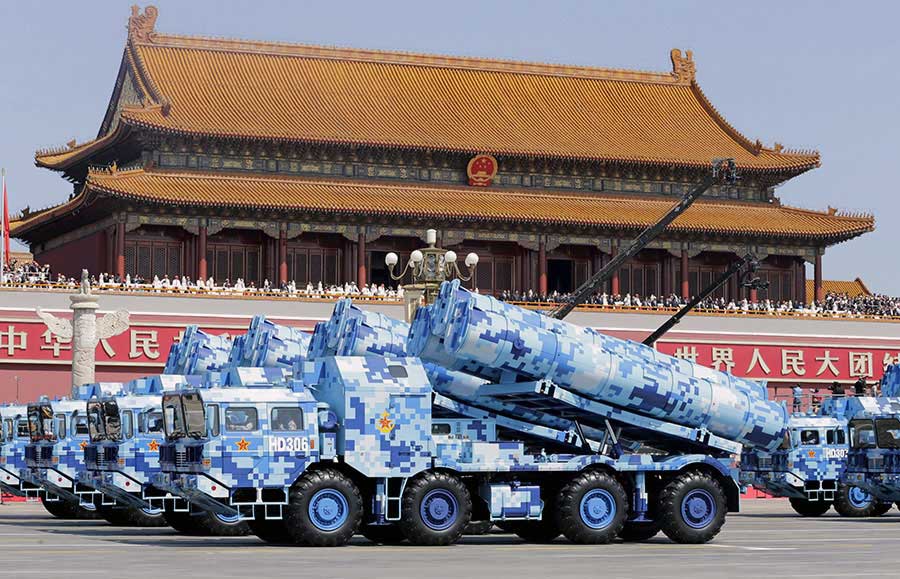 Soon after the mega Parade was over, the blue sky disappeared again over the Tiananmen Square; pollution returned to the Chinese capital, so did President Xi Jinping’s headaches.

Xi will have to forget the glamour of the Grand Parade and deal again with the fluctuating stock exchanges, the poor figures of the Chinese economy and the ‘reforms’ not only in the financial sector, but also of the People’s Liberation Army (PLA).

Has China learnt the lessons of History? The problem is that Xi and his colleagues would like others to learn their lessons, as for them, China has always been on the right side of the history.

From the Rostrum of the Square, Xi declared: “War is like a mirror. Looking at it helps us better appreciate the value of peace. Today, peace and development have become the prevailing trend, but the world is far from tranquil. War is the sword of Damocles that still hangs over mankind. We must learn the lessons of history and dedicate ourselves to peace.”

Has China learnt the lessons of History?

The problem is that Xi and his colleagues would like others to learn their lessons, as for them, China has always been on the right side of the history.

Xi used the occasion to make a Panchsheel-type declaration: “In the interest of peace, we need to foster a keen sense of a global community of shared future. Prejudice, discrimination, hatred and war can only cause disaster and suffering, while mutual respect, equality, peaceful development and common prosperity represent the right path to take.”

And reiterated that China was a peaceful nation: “China will remain committed to peaceful development. We Chinese love peace. No matter how much stronger it may become, China will never seek hegemony or expansion. It will never inflict its past suffering on any other nation.”

All this with a mighty show of force happening just a few meters away!

Xi, to show his good intentions, announced that China will cut the number of PLA’s troops by 300,000 before 2017, while adjusting the ratio of ground, air and naval forces ‘to better cope with modern warfare’.

Soon after the Parade was over, Yang Yujun, the Ministry of National Defense’s spokesman clarified during a press conference: “Chinese armed forces will be slimmer but more capable, and their composition will be more scientific.”

It seems rather complicated as the command structure changes depending on whether China is at war or at peace.

A Chinese ‘expert’ told The Global Times: “The number of troops equipped with the latest weaponry will increase. Airborne troops, especially, would make a difference in future landing actions and attacks, their assault ability would be enhanced when deployed on air transport planes.“

Some other analysts believe that the future commander of a battle could be an officer from air or naval forces, like the US Pacific Command, which is led by a naval officer.

The Northeast Combat Region would comprise the areas currently under the Beijing Military Region (MR) and the Shenyang MR; it will have its headquarters in Beijing.

Further, and more difficult to envisage, the Combat Regions may not actually command troops. Though troops will technically be under the PLA Army, PLA Navy and PLA Air Force central command headquarters during peacetime, the army, navy and air force would each establish a joint command unit, in each of the combat regions and these units could command the troops in case of a war.

It seems rather complicated as the command structure changes depending on whether China is at war or at peace.

A collateral of the reform: a Taiwanese website WantChinaTimes claims that, “the troops to be cut may be transferred to form to ten armed police tactical units and 100 armed police warfare groups, with both likely to be stationed in the restive Xinjiang Uyghur autonomous region.”

Some troops will probably be sent to Tibet too.

The International Campaign for Tibet recently reported major troop movements on the Tibetan plateau, “including tanks or heavy artillery in convoys of more than 200 vehicles, have been observed in different parts of Tibet in the buildup to the September 1 anniversary of the establishment of the Tibet Autonomous Region, which will be attended by Chinese leaders from Beijing. The People’s Liberation Army held major live fire exercises this week led by the Chengdu military district that oversees Tibet and the border areas.”

Soon after the Sixth Tibet Work Forum was held in Beijing China Tibet Online asserted that the Forum “clearly defined the Party’s strategy and systematically outlined the policies for governing Tibet.”

Interestingly, President Xi asked the Party cadres to carry forward the fine tradition and to instill a new meaning into the ‘Old Tibetan Spirit’.

What is this ‘Old Tibetan Spirit’?

The article answers “the ability to endure hardship, to fight, to tolerate, to unite, to devote”.

It further explains that it was the ‘Spirit’ of the People’s Liberation Army when they ‘swept through the whole of China as the liberation war was coming to an end’; the article adding: “Only Tibet hadn’t been liberated on the mainland”.

Mao would have written to the Southwest Bureau (looking after Tibet affairs) that India and the United States were casting an eye on Tibet: “we must march into Tibet sooner rather than later, otherwise trouble awaits.”

Mao invaded Tibet to protect the Roof of the World from Indian designs!!!

Who is to believe this?

…After the People’s Liberation Army entered Tibet, a series of territorial issues arose due to Tibet sharing a border with India.

A few months before Tibet’s invasion, the 18th Army Commanders took ‘sonorous oaths at a swearing-in ceremony’: “We will resolutely stick the five-star red flag in the Himalayan mountains so happy flowers can bloom all over Tibet!”

The ‘Spirit’ was “that ability to endure hardship and spirit to fight which led to the peaceful liberation of Tibet in 1951.”

More interesting the Old Spirit was forged, according to the Chinese official website, during the Sino-Indian War: “After the People’s Liberation Army entered Tibet, a series of territorial issues arose due to Tibet sharing a border with India. The relationship between China and India soured after talks between both sides broke down and the Sino-Indian Border Conflict broke out in 1962.”

The website further asserts: “During the Sino-Indian War, China’s frontier guards amassed [sic] a total of more than 2,400 casualties. They drove out the invading Indian army and protected the territory and sovereignty of the motherland, at the same time as dealing a blow to the arrogance of the Indian expansionists.”

Can you believe that when Xi Jinping speaks of ‘peace’ in Tiananmen Square, the official propaganda machinery speaks of “the arrogance of the Indian expansionists” which help the PLA and the Party cadres posted on the plateau to forge the ‘Old Tibet Spirit’.

This is today given as an example to follow.

What about the borders with India?

…despite that ‘reducing’ of the ground forces size, the border with India remains a priority for Beijing.

The Seminar’s statement quotes Xi Jinping, who affirmed during the Work Forum: “Given that the stability and security in the Tibet autonomous region are closely relevant to those of the whole nation, any work related to the region should focus on maintaining national unity and consolidating ethnic solidarity.”

This remarks, says China Daily are “an elaboration of the practical and long-term strategic significance of Tibet’s stability to the country as a whole.”

The article brings back the old ‘imperialist’ concept of ‘buffer zone, and adapts it with Chinese characteristics: “As a border region, Tibet has long served as an important safety shield for the whole country. Thus, solidarity among the various ethnic groups and a sense of national identity are of the utmost importance. Ensuring the region’s stability and security should be the key aims for government work related to Tibet and Tibetans, and these will also help create favorable conditions for the region’s economic development and raising local people’s living standards.”

Why to have an International Seminar to discuss these issues, including China’s borders with India, in Inner Mongolia?

I have no answer.

Apparently, the conclusion of the Seminar was “National unity is in the interests of Chinese people from all ethnic groups and ethnic solidarity offers an important guarantee for national unity. Considering the fact that more than 90 percent of inhabitants of Tibet are Tibetans, national work related to the region should be particularly focused on how to promote solidarity between Tibetans and other ethnic groups as a way of enhancing national cohesion.”

All this means that despite that ‘reducing’ of the ground forces size, the border with India remains a priority for Beijing.

Has China learned some lessons of History?

Beijing has published another White Paper, the second in 5 months. It does not mention the role of the PLA and China’s borders…

PS: While this was written, I realized that Beijing has published another White Paper, the second in 5 months.

It does not mention the role of the PLA and China’s borders, it just speaks of the so-called achievements of the People’s Republic of China:

Since the democratic reform was carried out in 1959 and regional ethnic autonomy came into practice in 1965, Tibet has established the new socialist system and achieved historic leaps and bounds in its economic and social development. Tibet has taken a road that unites it with all China’s ethnic groups and struggles to develop equally, achieve prosperity, and make progress with them. As part of the Chinese nation, the Tibetan people fulfill the right to participate equally in the management of state affairs; they are thus managers of local social affairs and masters of their own destiny, creating and sharing the material and spiritual wealth of Tibet.

It raises more questions than it answers.

If Tibetans are so happy and well-off, why to publish 2 White Papers in a row? Why does China need to hammer again and again, that the Tibetans are the masters of their own destiny?

Why does Beijing keep the Panchen Lama, selected by the Dalai Lama, under house arrest? Is he master of his own destiny?