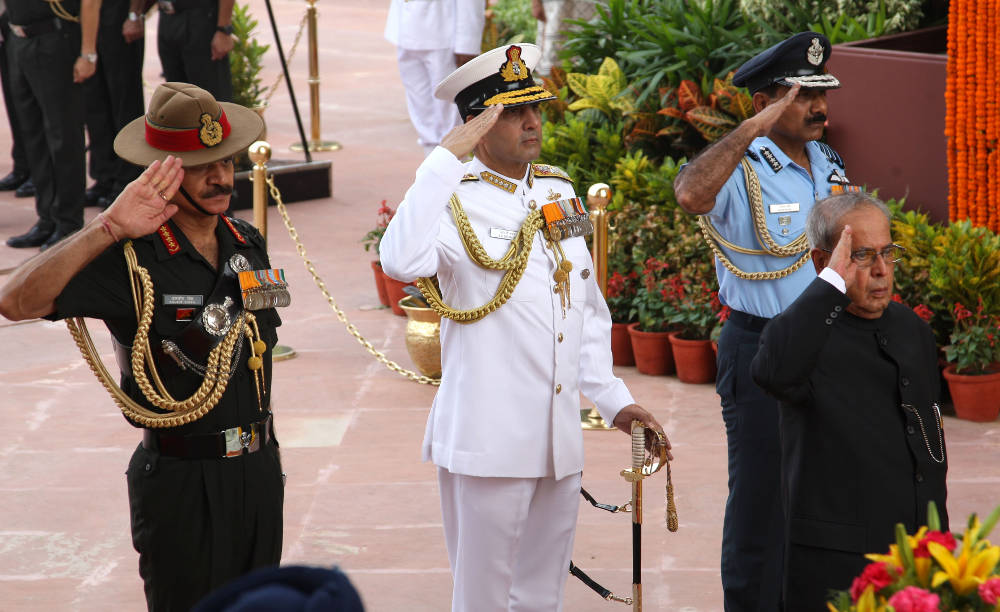 The 50th anniversary of the 1965 war covertly initiated by Pakistan against India is being recalled by the Narendra Modi government in a month-long celebratory commemoration that commenced on August 28 (Friday) – the day when Indian troops captured the Haji Pir pass.

Pakistan began this war and tried to use infiltrators to stoke local sentiment in Kashmir but were foiled – much to Zulfiqar Ali Bhutto’s dismay.

This political decision to commemorate the 1965 war is a departure from earlier practice when Congress-led governments preferred to keep a low profile about India’s rich military history, and this was most evident in 1995 – when the P.V. Narasimha Rao government chose (wrongly, in my view) to stay away from the 50th anniversary recall of World War II and the United Progressive Alliance-II ensured that the 40th anniversary of the 1971 war was muted.

However, the Friday recall of the martyrs of 1965 was led by President Pranab Mukherjee who laid a wreath at India Gate and this was followed by Prime Minister Modi who paid tribute through a tweet: “I bow to all the brave soldiers who fought for our motherland.” And to add to the encomiums showered by political leaders, Congress party president Sonia Gandhi recalled party detail when she noted: “Under the able leadership of PM Lal Bahadur Shastri and defence minister Y.B. Chavan, the Indian armed force displayed exemplary courage.”

This is indeed a rare and welcome departure from the experience of the last seven decades when the Indian military and its contribution in the larger national endeavour has often been glossed over – except briefly after the emphatic 1971 military victory that led to the birth of Bangladesh.

However, even at the time, the shabby treatment meted out to Field Marshal Sam Manekshaw by the Indira Gandhi government was perceived as the extension of an institutional disparaging of the Indian military and ‘keep-them-at-a-distance’ attitude that is deeply embedded in the Indian political psyche.

India’s higher national security management remained grossly inadequate.  Inter-service coordination was poor and the fact that the navy was kept out of the war is illustrative.

Thus the President of India leading the nation to recall a long forgotten war was welcome departure – but the fact that a section of the retired military community decided to boycott the 1965 commemoration in protest over the delay in the OROP (one-rank-one pension) is reflective of the many complexities and contradictions that envelop the month-long celebrations.

Did India win the 1965 war?  This is a question that was raised in many quarters when the National Democratic Alliance (NDA) government announced its intent to ‘celebrate’ the 50th anniversary of the war, and the answer is mixed. If a war is to be assessed through number crunching by way of comparing lives lost, prisoners taken, major platforms destroyed and territory captured – then India did emerge as the victor. But it was a slender victory, and the margin was nowhere as emphatic as it was in 1971 when India dismembered Pakistan, helped create a new state, captured 93,000 PoWs and obtained the surrender of the Pakistani military.

Most objective assent about the 1965 war is agreed that Pakistan began this war and tried to use infiltrators to stoke local sentiment in Kashmir but were foiled – much to Zulfiqar Ali Bhutto’s dismay.  One of the more informed assessments of the 1965 war by a veteran US diplomat and historian Dennis Kux concludes: “Although both sides lost heavily in men and material, and neither gained a decisive military advantage, India had the better of the war. New Delhi achieved its basic goal of thwarting Pakistan’s attempt to seize Kashmir by force. Pakistan gained nothing from a conflict which it had instigated.”

The political resolve of the diminutive prime minister Shastri has not been adequately acknowledged and his decision to open another front against Pakistan in the Punjab province rattled the adversary who presumed that India would be restricted to a defensive war in Jammu and Kashmir. Thus one major strategic inference of 1965 was that for India – any attack against J&K would be deemed to be an attack on India and that Delhi would choose to respond in a manner, time and place of its choice. The offensive-defense Shastri doctrine was born.

India may have won the war by a modest margin militarily but it could not ensure an abiding peace with its neighbour.

On the flip side, India’s higher national security management remained grossly inadequate.  Inter-service coordination was poor and the fact that the navy was kept out of the war is illustrative. Army-air force tactical harmonization could have been better and intelligence gathering and assessment revealed many gaps. However, the Indian Army acquitted itself with glory and the capture of Haji Pir, the battle of Asal-Uttar and the advance on Lahore are some of the better known operations.  The fledgling Indian Air Force also proved its mettle and the Indian-made Gnat surprised the adversary.

For India, the conclusion of the 1965 war at Tashkent where both sides were compelled to return all territorial gains made and the tragic demise of prime minister Shastri reduced this chapter to a political stalemate. India may have won the war by a modest margin militarily but it could not ensure an abiding peace with its neighbour.

Paradoxically, the sight of Indian tanks outside Lahore induced a deep anxiety in Pakistan about their vulnerability to an Indian military offensive, and consequently it now observes September 6 as Defence Day – and a tenacious narrative has been created by the Pakistan army around the catastrophic exigency that must be deterred – at any cost.

Consequently, post 1965, the ‘fauj’ in Pakistan gradually projected itself as the ultimate guardian of the state and one may conjecture that this war marks the beginning of the primacy of Rawalpindi (GHQ of the Pakistan army)  and the deep anti-India hostility that defines the DNA of the deep state.

The use of covert operations and ‘irregulars’ by the Pakistan military that began in October 1947  was the centre piece of the 1965 Op Gibraltar – and this investment in irregulars and terror has continued through Kargil of 1999 and Mumbai of 2008 and the summer of 2015,  when Pakistani infiltrators and terrorists have been captured alive.

There are many lessons for India that could be derived from the 1965 war – but none more critical than improving the texture of India’s higher defence management and a constructive focus on the need to nurture the Indian military in an empathetic manner (the OROP fiasco could have been avoided) and evolve an affordable and effective strategy to minimize the malignancy of the deep state in Pakistan.

Fifty years after 1965 that objective remains elusive for Raisina Hill.