26/11: Nawaz creates turmoil in Pakistan by accepting involvement of Pakistan 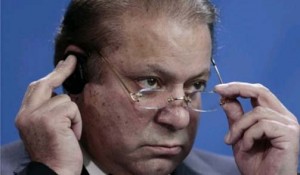 There is no doubt that three times Prime Minster of Pakistan, Nawaz Sharif of Muslim League (Nawaz) Party, whose Government currently rules Pakistan, his recent statement given to their leading news paper Dawn almost a week back that it were Pakistani jehadis who were involved in 2008 Mumbai jehadi attack, has caused a very big turmoil in Pakistan. Nawaz Sharif is being called a traitor in Pakistan. There is also a demand that he should be tried and hanged as a traitor.

Immediately after this statement was published in Dawn, this statement went through number of twists and turns including Navaz Sharif saying that he was misquoted. On Monday 14 May 2018, Pakistani National Security Committee (NSC) comprising top civil and military officials assembled in Islamabad and said that Sharif’s public statement that Pakistani jehadis carried out Mumbai attack of 2008 is incorrect and misleading. However Nawaz Sharif talking to the Pakistani media outside the Accountability Court of Pakistan, hearing the corruption cases against Nawaz Sharif and his family, Nawaz Sharif again reiterated his charge on Tuesday 15 May that what he said earlier of Pakistani jehadis involved in Mumbai attack, he stands by it and that the NSC statement of 14 May is wrong, painful and frightening.

Nawaz Sharif in his this interaction with Pakistani media, even went one step further and said that in 2016, in one of the meetings of NSC he had raised the issue of Pakistan’s growing international isolation because of behind the scene Pakistani military support to the Jehadi organisations like Lashkar –e-Toiba, jaish-e-Mohammad and Haqqani network. For the first time in history of Pakistan somebody as important as Nawaz Sharif who had been three times Prime Minster of Pakistan has directly named and indicted the Pakistani Army and its support to Jehadis. Agreed that earlier also Pakistani president General Musharraf, former DG ISI Lt Gen Shuja Pasha, Pakistan-Tehrik-Insaf Party Chief Imran Khan, former National Security Advisor Maj Gen Durrani and former Interior Minister Rehman Mallick had also spoken about it, but in a very oblique manner. This time on 15 May Nawaz Sharif has directly named Pakistani Army.

On 15 May, Nawaz Sharif in his interaction with media had also demanded that a National Commission must be set up to investigate and decide who committed treason in Pakistan. He said that if he is found wrong by national commission, he can be hanged. It is worth remembering that after his these statements against Pakistani Army, Navaz Sharif is being called in Pakistan as a traitor by his political opponents. Two PILs have been filed in Lahore High Court to declare him as anti national and traitor and tried accordingly. The current Prime Minster of Pakistan who belongs to Nawaz Sharif political party and appointed by him, Khakan Abbasi has however said that Nawaz should not be called a traitor.

It needs to be recalled that In Kargil operations in 1999 where General Musharraf was then Pakistani Army Chief, Pakistani Army in July 1999 was staring at humiliating defeat. Nawaz Sharif then PM of Pakistan had rushed to America to request then American president Bill Clinton to restrain India. Clinton told him to withdraw immediately or face consequences. Pakistani Army withdrew but the blame game between Musharraf and Navaz Sharif started. This led to military coup by Musharraf and Nawaz Sharif was sent on asylum to Saudi Arabia. Nawaz Sharif came back to Pakistan after five years and fought and won general elections in Pakistan with a thumping majority. But then relations between Pakistani military which is the real power in Pakistan with 20 billion dollar business in Pakistan (Ayesha Siddiqa’s book – Military Inc) and Nawaz Sharif always remained strained.

Truth is that Nawaz Sharif wanted good relations with India; he has declared this in his election manifesto also, as also he wanted Pakistani Army to be brought under the civil government control. Both these measures are anathema to Pakistani Army who had ruled Pakistan for almost 35 years and hate India is their main theme of survival. In the last five years of Nawaz rule Pakistani Army has used all tricks of trade to weaken Nawaz Sharif Government and has succeeded also to quite an extent.

The current problem of Nawaz Sharif with the Pakistani establishment started last year when Pakistani Army and its Supreme Court ganged up against then Prime Minister Nawaz Sharif to oust him. In Pakistan there is no politician who can be called honest. Nevertheless the SC of Pakistan ordered an inquiry of corruption against Nawaz Sharif and as against involving civil investigation agencies; members of ISI of Pakistani Army were used for this investigation. As expected they gave adverse report in their inquiry report and Navaz Sharif was asked to vacate the post of PM by their SC because supposedly he had not disclosed the retaining amount he was getting from his sons firms, located outside Pakistan. Needleless to say this SC- Military combo brought Nawaz Sharif down to mother earth with post of PM of Pakistan taken away by legal decrees of SC of Pakistan.

After making him resign from the office of the Prime Minister of Pakistan by SC-military combo, Navaz Sharif initially went to people of Pakistan, playing the victim card. General elections are due in Pakistan this year in Jun-July. Seeing that he is getting tremendous response by people of Pakistan in his road shows, Military-SC combination of Pakistan again got to gather to disqualify Nawaz Sharif from being leader of his party or holding any political appointment for life. Needleless to say pushed against wall like this, Nawaz Sharif had threatened that as three times Prime Minster of Pakistan, he has got lot of secrets with him which if exposed; Pakistani establishment will have hell to pay. Involvement of Pakistani Army in Mumbai jehadi attack is first such revelation. N

ext Nawaz Sharif may train his guns on Kargil episode where Pakistani Army was involved in a big way and was badly defeated. It is worth remembering that in Kargil operations which led to humiliating defeat of Pakistan and where Nawaz Sharif says that 3000 Pakistani soldiers were killed while its Army says only 500, Sharif says that he was not informed by Musharraf while Musharraf says he was on board. Revelations by Nawaz Sharif on this issue can be very damaging to Pakistani Army since they till now have been claiming victory over India in all operations including Kargil.

Unlike Gen Zia- ul- Haq days when he could arrest then PM Bhutto and hang him, now with world becoming a global village and international world opinion becoming so important, this option is no more available with military of Pakistan. They cannot even go for another coup for the same reason. So it will be very interesting to watch this ongoing tussle between Nawaz Sharif, his party’s civil Government of Pakistan and SC-Military combo.Nawaz Sharif is going to go to people and will try to expose the shenanigans of this SC-Military Combo. He is succeeding also. There are already talks in military circles of Pakistan to get this general elections postponed. Nawaz Sharif has made it clear that if he is made to drown then he will not drown alone but take lot of big wigs along with him. Already his revelations on Mumbai Jehadi attack has forced Pakistani judiciary to re-start the Mumbai culprit trials which were lying in limbo till now.

The present Pakistani Army Chief Bajwa has also suddenly started cooing India friendly tunes. The so called “Bajwa Doctrine” says that Pakistan wants peace with all neighbours. China with its ongoing 47 billion dollars investment in Pakistan on CPEC knows that this corridor runs 3000 kms in Baluchistan which as per Pakistan listens more to India then Pakistan. Till this OROB belt project of China in Pakistan is in making, it will not like Pakistan to exacerbate its relations with India. However India must not lose its guard because both China and Pakistan cannot be relied upon.