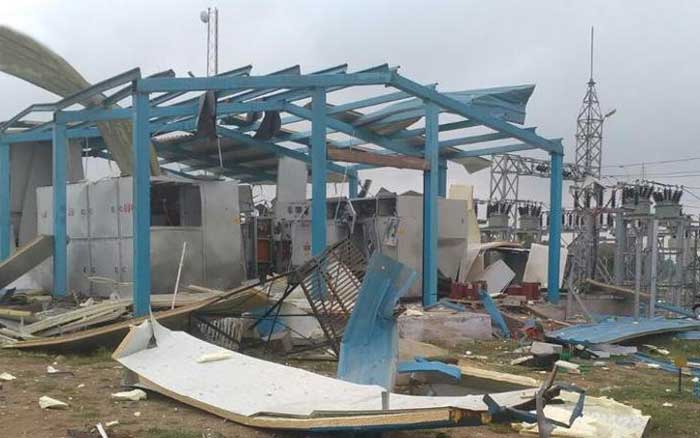 On the 19th September Maoists destroyed a private solar power plant located in Amas police station area in Gaya district in Bihar. The owners fault was that he had the temerity to refuse to pay a levy imposed by the Maoists. The power plant was spread over 120 acres and produced 25 Mega Watts of electricity. The plant had provided employment to large number of locals.

The government must realize that mere wishes and policy initiatives will not spur private initiatives in energy and other sectors, if the environment is not secure. Start-ups without security will be non-starters.

This is the Maoist concern for development and the poor!

The larger question is but about the symbiosis between security and development. The question is also about criminal black money generated by the Maoists.

The government must realize that mere wishes and policy initiatives will not spur private initiatives in energy and other sectors, if the environment is not secure. Start-ups without security will be non-starters.

The destruction of the solar plant by the Maoists was reported by a leading Indian daily and the very next day i.e. 21 Sep, the newspaper reported the fulminations of a Delhi University professor Nandini Sunder, a known Maoist apologist, against the present dispensation. This was at Patna, not very far from Gaya. The symbiosis between the nature and role of overground and underground Maoists could not be missed out.

In her talk she perorated about “insecurity among the people of the country”. Then she compared “cow vigilantes” with death squads in other countries. She talked about the lot of tribal in Chhattisgarh, which is her next home. In fact even the DGP of the state does not have the kind of unhindered access in Maoist controlled areas that Nandini Sunder enjoys.

Just as in Gaya, the Maoists in their liberated zone have been targeting government efforts to provide electricity to the tribal in Chhattisgarh. Any measure that can dispel darkness in the liberated zones is an anathema to the Maoists.

This author was part of a government sponsored study team on Maoism five years back and travelled through the Red Corridor. In Chhattisgarh, the District Magistrate of Dantewada, lamented that the Maoists had destroyed all the pylons erected for supply of electricity to the tribal under Rajiv Gandhi Vidyutikaran Yojna. The Maoist leadership is paranoid about people in liberated zones being weaned away by the state through infrastructure projects because of its potential to spread awareness and exposure to alternative narrative. Hence, to the Maoists spinoffs like Television is a psychological bomb, far more dangerous than a nuclear bomb.

…where is the difference between the Maulvi who prepares his students for global jihad and these university teachers who are steeped in international communism of the ultra-leftist variety, and turn their students into Maoist killing machines?

During the same study tour this author had also met the District Magistrate of Gaya. Parts of this district are literally liberated zones of Maoists. The lady DM narrated to this author that before an Independence Day, the Maoist leaders had issued a diktat, that only black flags will be unfurled. In one of the schools, a girl, an eighth class student, could not bear the insult to India. Incensed and in frenzy, she pulled the black flag down and hoisted the national flag. Her family has been missing since then.

Professors like Nandini Sunder have much to learn from this school girl in remote part of Bihar.

It did not occur to Nandini Sunder that the biggest terrorists in India are the Maoists. In the liberated zones of the Maoists national flag, national anthem, roads, bridges, electricity and television are not allowed. Even if these are permitted, it is incumbent upon meeting the levy demands of the Maoists which is ruthless and incessant.

If terror means violence that creates anxiety, nothing fits the definition more appropriately than Maoist terror. In the Red Corridor existing industry gasps for life, agricultural land lies untilled, schools and clinics have shut down due fear and extortion. The over-ground Maoists thrive on this very industry. Professor Sai Baba of Delhi University, who is now lodged in jail, had been sending emissaries to the Maoist leadership in Gadchiroli in Maharashtra to seek funds raised by extortion to finance setting up Maoist network in Delhi. There are lawyers in Delhi who owe their opulent lifestyles entirely to the extortion industry of the Maoists.

Recently one Professor Giri, again of Delhi University, unambiguously threw a gauntlet at the Indian State saying that he supports an armed rebellion.

Now, where is the difference between the Maulvi who prepares his students for global jihad and these university teachers who are steeped in international communism of the ultra-leftist variety, and turn their students into Maoist killing machines?

Since Jihad and Maoism are global in import, these ideologies are being leveraged internationally by vested interests. China is one such country.

Both Jihad and Maoism reject the idea of India. Both believe in implanting beast in human beings. Both believe in murder to create terror. Both revel in spilling of blood. Women cadres dancing around the slain body of Congress leader Mahendra Karma in Chhattisgarh is etched in public memory. The boy who was handling the Radio Set during the attack was no more than 10 years in age. The madrasas in Pakistan prepare suicide bombers who are barely in their teens. So there is lot of affinity between jihadis and Maoists. Their tryst in India is not just in JNU and Jadavpur or Delhi University, it is the case with places like Gaya as well. The Rohingya issue had triggered bomb blasts in 2013 in the Bodh Gaya temple, the target being the Myanmarese pilgrims. The recent arrest of Tauseef Khan, the mastermind of 2008 Ahmedabad serial blasts, is a stark reminder that Gaya district in Bihar is a safe haven for both Jihadis and Maoists.

Since Jihad and Maoism are global in import, these ideologies are being leveraged internationally by vested interests. China is one such country. Thomas Reed, former US Air Force Secretary in his book “The Nuclear Express: A Political History of the Bomb and its Proliferation’’ states that it was Deng’s strategy to equip Muslim countries like Pakistan and poor communist countries like North Korea with nuclear weapons, so that the West could be destroyed by them without Chinese footprints.

This Maoist-Jihadi combine or the half-front that the Army Chief talks about is the most sophisticated and dangerous threat. One reason that the peddlers of the murderous Maoist ideology get away is because they speak English and masquerade as intellectuals.

We nevertheless have chosen to address this half-front threat of murderous ideologies by 21 Gun Salute.