Geographical location of Dhaka is such that it can be defended by a dedicated small force for months so initially it was considered that Dhaka can be forced to surrender by a prolonged siege & not by a direct assault but the campaign had to be completed within 3 weeks. Because it was anticipated that international powers would enforce a ceasefire and the outcome of the campaign would be stalemate just like 1965 Indo-Pak war. Declassified documents of CIA & the US State department shows that New Delhi had assured Moscow that campaign in East Pakistan will complete in about 10 days.

Niazi adopted this plan so as to delay advance of Indian army till international powers enforce a ceasefire. This plans looked fine on paper but it proved fatal for Pak forces.

To get Pakistan forces out of Dhaka bowl, the India-East Pak border was kept alive through continuous skirmishes all along the border using Mukti Bahini backed by BSF. Taking this bait, Gen A.A.K Niazi, commander of Pakistan forces in East Pakistan, deployed his forces on the border against Mukti Bahini’s actions & in the towns on the possible lines of Indian Advance to turn them to ‘fortresses’. Pak troops deployed (in company strength) on the border were to fight till they were ordered to withdraw to their designated ‘fortress’ where they were to fight till the end. But towards the end of November 1971, he issued another order prohibiting any withdrawal of troops holding forward position unless 75% causalities had been sustained. Niazi adopted this plan so as to delay advance of Indian army till international powers enforce a ceasefire. This plans looked fine on paper but it proved fatal for Pak forces.

As per the book “India’s wars since independence” by Maj. Gen. Sukhwant SIngh (who was Deputy Director of Military Operation(DDMO) in Army Headquarters, New Delhi), the Indian plan was evolved by Lt. Gen. K.K. Singh (DMO) & the plan was discussed with Eastern Army Commander, different formation commanders & the Field Marshal Manekshaw himself. After many corrections, the final plan was to attack the Dhaka bowl from 3 sides with maximum speed while by-passing heavily defended fortress & capturing the main communication centers. The attack had to be as fast as possible to gain as much territory as possible while moving in general direction of Dhaka. As Gen Sukhwant Singh mentioned on page#59: –

“Once the enemy was defeated in detail by this maneuver, the race for Dacca would be started by any formation in a position to do so. It was fully appreciated that without the capture of Dacca the campaign could not be concluded successfully.”

“Because of these limitations the higher command, in assigning tasks to Eastern Command, did not spell out the capture of Dacca but left it to be considered during the conduct of operations as and when opportunity offered itself.”

The importance of Dacca as the main objective was made clear in August although no formal amendment to the Army HQ Operational Instruction was sent out until late November.

“However, a reappraisal towards the end of November led to a change in the orders & Aurora was told that the whole of East Pakistan was to be occupied, with the Dacca as the prime objective.”

After Lt. Gen. K. K. Singh left DMO office, Lt. Gen. Inderjit Singh Gill became Officiating DMO. In his books, Lt. Gen Jacob has praised Gen Gill more than anyone else. Jacob said that Inder was only officer in Army HQ who had his head on his shoulders & the one who held his (Jacob’s) hand in New Delhi. Because during the war, Jacob informed Gill that he wanted to move 123, 167 & 5th Mountain Brigade which gen Gill (as DMO) approved & later on 6th Dec, Jacob requested to move 167th & 5th mountain Brigades into East Pakistan in order to push the advance on Dhaka. Manekshaw was not available at that time, so Gen Gill approved the request. In 2007, Gen Jacob sent a copy of his book to Inder Gill. In that copy, next to line that says “…In Gen. Manekshaw’s orders surprisingly, no mention was made of Dacca…” Inder wrote a fitting remark BULLSHIT. Towards the end of Nov, 1971, the plans were revised & it was envisaged that 4th Corp would cross over Meghna river & would advance to Dhaka from the east & 101 Communication Zone along with 95 Mountain Brigade would advance to Dhaka from the north, which is exactly what happened.**

In 1992, during a discussion about 1971 war operations at College of Combat, Mhow Gen. Gill cleared that :-

“The objectives given to the Eastern Command in the army HQ Operational Instruction were the areas up to the main river lines. Dacca was not included as an objective. This was because it was considered at the time planning was done, that Eastern Command would not have the capability of capturing the whole of East Pakistan before a ceasefire was enforced upon us.

The importance of Dacca as the main objective was made clear in August although no formal amendment to the Army HQ Operational Instruction was sent out until late November. The amendment, when it was sent out, was that the objective of Eastern Command was the capture of whole of East Pakistan.”***

Gen Jacob has said that he is not a medal hunter or glory hungry person but from all the noise he has been making, it looks like he is trying to snatch the main spot in the picture of most glorious moment of Indian Army.

(iv) Manekshaw sent us an order that “you will, by so and so hours, capture the following”, and goes on to list every single town, except Dhaka! To make matters worse for us, he copied it to the three corps. I had to speak to them and asked them to ignore orders. I had to ignore orders.

As stated above, the objective (Dhaka) was clear to Army HQ by August & plans were readjusted formal notification was sent to eastern Command at the end of Nov, 1971. Capturing ports of Chittagong and Khulna were given priority in the beginning because it was anticipated that Pak Army will get reinforcements through these ports as Indian Air Force will have air superiority within initial days of the war & will not allow any reinforcement by air. These two ports could also have been used by Pak Army to escape to West Pakistan or any other neutral country. So securing these ports was important. But when Naval Chief of Staff, Admiral S.M. Nanda gave assurance that he will secure the sea access to East Pakistan through these ports, task of securing these ports was given low priority. And that’s exactly how the war proceeded.

Looking at the discipline & chain of command maintained by Indian Army, anyone who is familiar with Army’s way of working would fail to understand how (& when) a ‘Chief of Staff’  can ask corp commanders to ignore orders given by the Army Chief. Even if he does so, there is no way that the corp commanders will follow order of COS against the order given by the Army Chief. For God’s sake, we are talking about Indian Army. 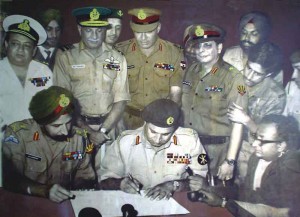 1971 War: The victor and the vanquished, signing the Instrument of Surrender

In his interview to Forbes, BBC & in his books, Gen Jacob has said that he is not a medal hunter or glory hungry person but from all the noise he has been making, it looks like he is trying to snatch the main spot in the picture of most glorious moment of Indian Army. Perhaps that why he can be seen right besides Gen Niazi giving a nice pose to the photographers with a broad smile where as all other generals are looking down at the surrender document.