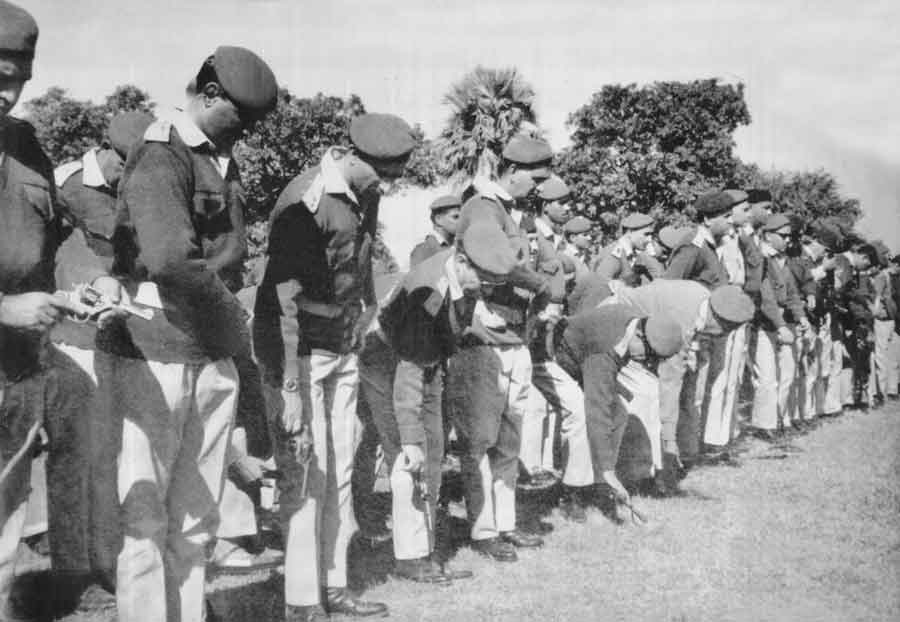 1971 war was the finest hour of Indian Army. In a quick, decisive, well planned & well executed campaign, Indian Army carved out a new nation on the face of earth – Bangladesh.  It was a remarkable campaign when different departments of Indian Govt. – Armed Forces, Defense Ministry, External Affairs Ministry, Home Ministry, Finance Ministry, Indian Railways, RAW etc worked like well oiled machine to surprise the world with what it achieved in just 12 days. Indian Army was led by Field Marshal S.H.F.J. Manekshaw who had Lt. Gen. Jagjit Singh Aurora as Eastern Army commander & Lt. Gen. JFR Jacob was the ‘Chief of Staff’ (COS) of Eastern Command.

Gen Jacob claims that it was actually he who insisted that Dhaka must be the final objective & he made final move to capture Dakha.

Gen. Jacob has been very critical of Field Marshal Manekshaw & Gen. Aurora about their operational plans of 1971 war. In his book “Surrender at Dacca – Birth of a Nation”, he has mentioned that the objective of Army Headquarters (HQ) was never Dhaka & it was to capture as much territory of erstwhile East Pakistan as possible to install an interim Govt so that millions of refugees, who had been coming to India since April 1971, can be sent back to their home land. Gen Jacob claims that it was actually he who insisted that Dhaka must be the final objective & he made final move to capture Dakha. Here is a list of some of the statements he made during an interview given to Forbes Magazine on 15th July, 2011: –

(i) Manekshaw was being pushed by the government to move to Bangladesh in April. He was pushing me. I refused and gave him good reasons. (ii) He had asked for a brief and it was my brief that was read out to Prime Minister Indira Gandhi. (iii) We had said Dhaka [should be taken first] but he [Manekshaw] said Dhaka was not important and wanted to take the entry ports. But I disagreed violently. Dhaka is the centre of gravity and in war you go for the centre of gravity. (iv) Manekshaw sent us an order that “you will, by so and so hours, capture the following”, and goes on to list every single town, except Dhaka! To make matters worse for us, he copied it to the three corps. I had to speak to them and asked them to ignore orders. I had to ignore orders.

(Link to the interview – http://business.in.com/interview/close-range/lt-general-jfr-jacob-i-had-to-ignore-orders/26542/1)

He has expressed same views to an interview given to BBC also. In his biography, he again attacked most of his bosses including Gen. Aurora & Field Marshal Manekshaw. These allegations are really very serious. To get a clearer picture, I went through few books & articles written on 1971 war. Here is what I found: –

Then he (Manekshaw) told Mrs. Gandhi, “My armored division, which is my strike force, has got 12 tanks which are operational out of a total of 197 tanks.”

(i) Manekshaw was being pushed by the government to move to Bangladesh in April. He was pushing me. I refused and gave him good reasons. (ii) He had asked for a brief and it was my brief that was read out to Prime Minister Indira Gandhi.
In another interview to BBC, Gen Jacob said,” Manekshaw called me & asked me to prepare to invade East Pakistan”.

Mrs. Gandhi asked FM Manekshaw to march into Bangladesh for the first & last time when she summoned him to join a cabinet meeting. This is how that meeting proceeded*: –

In that meeting, Mrs. Gandhi read telegrams of different states sharing their border with Bangladesh stating that millions of refugees have been coming to their states & the situation can lead to an economic & social disaster. Then she asked Sam what he was doing about it. Sam answered “nothing. It has nothing to with me. What do you want me to do?” She asked him to march into the erstwhile East Pakistan. Sam said “That means war.” She said “I don’t mind if it is war”. Sam said “What has bible got to do with it?”

Sardar Swarn Singh said “What has bible got to do with it?” Sam said, “In the first book, the first chapter, the first paragraph of the Bible, God said, ‘let there be light & there was light’ – so you feel that “let there be war & there is war”. Are you ready? I certainly am not ready. I will tell you what is happening. It is now the end of April. In a few days time, 15-20 days time, the monsoon will break & in East Pakistan, when it rains, the rivers become like oceans. If you stand on one side, you can’t see the other. I would be confined to the roads. Due to weather conditions, the air force will not be able to support me & the Pakistanis will thrash me- that’s one. Secondly, my armored division is in Jhansi- Babina area; another division is in Secunderabad area. We are now harvesting. I will require every vehicle, every truck, all the road space, all the railway space to move my soldiers & you will not be able to move your crops.” Sam then turned to Agricultural minister Mr. Fakruddin Ahmed & said, “If there is famine in India, they will blame you. I won’t be there to take the blame.” Then he told Mrs. Gandhi, “My armored division, which is my strike force, has got 12 tanks which are operational out of a total of 197 tanks.”

Sam replied, “Sir, because you are the Finance minister. I have been pleading for funds but you said that you have got no money.”

Sam again turned to Mrs. Gandhi & said, “Prime Minister, if in 1962, your father has asked me as the Army Chief & not General Thaper (Army Chief during 1962 Indo-China war) and you father had said, “Throw the Chinese out’, I would have turned around & told him, ‘Look these are the problems.’ Now I am telling you what the problems are. If you still want me to go ahead, Prime Minister, I guarantee you 100% defeat. Now you give me your orders”.

Sam said, “I have given my professional view, now the government must take a decision”.

The PM did not say anything. She was red in face and said, “Achcha, cabinet char baje milenge”.

Everyone walked out; Sam being the junior most was the last to leave.

Chief replied, “Prime Minister, before you open your mouth, do you want me to send in my resignation on the grounds of mental health, or physical?”

She Said, “Oh, sit down Sam. Everything you told me, is it true?”

Chief replied “Yes. Look it’s my job to fight. It is my job to fight to win. Are you ready? I certainly am not ready. Have you internally got everything ready? Internationally have you got everything ready? I don’t think so. I know what you want, but I must do it in my own time and I guarantee you 100% success. But I want to make it quite clear. There must be one commander. I don’t mind working under the BSF, under the CRPF, under anybody you like. But I will not have a soviet telling me what to do and I must have one political master who will give me instructions. I don’t want the refugee ministry. Home ministry, defense ministry all telling me. Now make up your mind.”

Need not to say that Manekshaw was not the kind of person who could have been pushed to do anything he did not find professionally right, leave aside committing a blunder like invading East Pakistan without preparation.

PM said, “All right Sam, nobody will interfere, you will be in command.”

“Thank you, I guarantee your accomplishment.”

Need not to say that Manekshaw was not the kind of person who could have been pushed to do anything he did not find professionally right, leave aside committing a blunder like invading East Pakistan without preparation.

Now let’s see, first, what a ‘Chief of Staff’ is & how this post came to existence. During WWII, Field Marshal Montgomery was commanding the 8th Army in North Africa when he realized that he waste a lot of his precious time in dealing with matters that have little operational value or little importance. He came up with the idea of ‘Chief of Staff’ and appointed Fracis de Guingand as his ‘Chief of Staff’ to work on such matters and to coordinate functioning of all senior Staff officers. Most armies of the world adopted the system. Now Lt. Gen. Jacob was ‘Chief of Staff’ of Eastern Command. He was responsible for the coordination of Senior Staff Officers in the Eastern Command & he did that job very well.

Indian Army is considered as one of the most disciplined armies of the world & they follow their chain of command in its letter & spirit. And IT IS NEXT TO IMPOSSIBLE THAT an Indian Army chief would call ‘Chief of Staff’ of Eastern Command & not the Eastern Army Commander to give any order or to have any assessment. Moreover before becoming Army chief, Manekshaw was Eastern Army Commander & it is too hard to believe that he did not know the terrain of Bangladesh. The logistic challenges in the East Pakistan, that Sam talked about in the cabinet meeting, is not a top secret. It is something that a normal student of Military history would know about. So it is baseless to say that a thorough professional like Field Marshal Sam Manekshaw would have called Gen. Jacob directly to know challenges in the area he had already commanded for years.