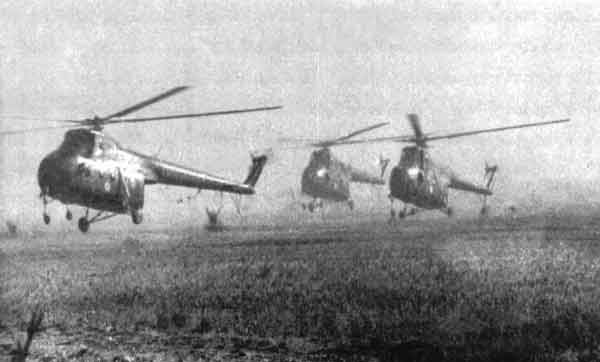 The first Special Heli-Borne Operation of the Indian Army was not a pre-planned operation. It just popped up, out of nowhere and was executed exceptionally well by a small team of 10 Mi-4 helicopters led by Group Captain Chandan Singh. The operation was a brain child of the legendary Corps Commander Lt. Gen. Sagat Singh who saw a small window of opportunity to tie down enemy forces in Sylhet town of East Pakistan and subsequent capture of the town. The extraordinary element of his plan was using helicopters to land an Indian battalion in the Sylhet town.

The first heliborne operation of Indian Army was planned spontaneously on 6/7 Dec by Sagat Singh and executed exceptionally well by Gr. Capt. Chandan Singh, his team and 4/5 Gurkha Rifles.

Such heliborne operations need meticulous planning at the Corps or Command level followed by discussions and exercises. A great deal of staff and field work and inter-service coordination go into its preparation. But the first heliborne operation of Indian Army was planned spontaneously on 6/7 Dec by Sagat Singh and executed exceptionally well by Gr. Capt. Chandan Singh, his team and 4/5 Gurkha Rifles.

While preparing for war, Niazi and his HQ discussed 4 different strategies to defend East Pakistan and finally adopted the Fortress Strategy. Following two assumptions were made while finalizing the defensive plan: –

•  IAF will have complete dominance of the sky with-in a couple of days and subsequently will attack Pak ground forces at will.

•  Pak forces would be hunted down by the local Bengali population.

As per this Fortress Strategy, 10 towns (nodal points) were to be converted in to Fortresses and stocked with 60 days of ammunition and 45 days of Ration. These towns were Jessore, Jhenida, Bogra, Rangpur, Jamalpur, Mymensingh, Sylhet, Bhairab Bazar, Comilla and Chittagong. Pakistani troops were deployed in penny pockets as the outer layer of defence near the international border and once the all-out war started, they would fight delaying actions and fall back to their respective Fortress to give a pitched battle to the advancing Indian Army.

Th Fortress Strategy was approved by Pak GHQ and implemented.

But Niazi simply did not have enough troops to implement this strategy. So he tried to improvise and started a deception game. Hoping to deceive the Indian Army by showing non-existent power, he raised 1 Ad Hoc Division and 4 Ad Hoc Brigades with bare minimum or even no troops under their command. One among them was the 202 Ad Hoc Brigade with just 31 Punjab under its command and some element of 91 Mujahid (an irregular force created to deal with Bengali population – basically a band of armed goons) and was assigned the task – defence of Sylhet Fortress!

Proud of his deception game, Niazi said to his staff, “You see, they will be flabbergasted to see these additional headquarters. Will mentally multiply our strength accordingly. It will certainly be a deterrent to him.”

On 25th Oct 1971, while talking to Public Relations officer Maj Salik, he said “Oh, I am ready for it (war). My defence works are complete. I have planned the war without the Air Force and the Navy. ‘Your fears are absolutely unfounded. you Seem to go by numbers. In war, it is not the numbers but generalship that counts. And do you know what generalship is? It is the art of positioning the right number of troops at the right place and at the right time.”

Later he explained his generalship and the strategy to few foreign correspondents, “My troops in the border outposts are like the extended fingers of an open hand. They will fight there as long as possible before they fold back to the fortresses to form a fist to bash the Enemy’s head”

Little did he know that soon he himself would become the reason for the destruction of these “fingers”.

Pak troops had fought and abandoned their defended localities in haste leaving behind their weapons, equipment and cooking utensils.

During the preliminary attacks of the Indian Army, starting from 20th November, there were some serious setbacks to the Pak Army – especially in the Atgram and Zakiganj area of Sylhet sector. Pak troops had fought and abandoned their defended localities in haste leaving behind their weapons, equipment and cooking utensils.

Niazi wanted to avoid repetition of such rout and issued an order that, “No withdrawals without suffering seventy-five per cent casualties. Then, too, the withdrawals will only be permitted by the G.O.C. himself. It had serious implications –

•  It ensured wastage of most of the regular Pak Army troops in isolated battles of no tactical value.

•  If 75% (or may be 60%) troops were lost and the remaining mauled troops managed to withdraw to the fortress, they could not augment the defending Pak forces. The resultant Fortress thus emerged was far less strong than Niazi first envisaged.

•  Third and most important, watching mauled Paki left over forces falling back to the Fortress lowered the already low morale of the defenders.

In short, no fingers to form a fist.

Hence all the fortresses fell like a house of cards within a week’s fighting. Most did not offer a pitched battle and abandoned their fortress. Troops in Bhairab Bazar Fortress kept watching Indian Helicopters ferrying a division just a few KMs to their south but did not disturb the Indian efforts. They allowed the Indian Army to go towards Dacca while they sit comfortably in their Fortress.

Coming back to Sylhet:

Under this background, Syhlet was converted into a Fortress with 202 Adhoc Brigade defending it.

The Eastern Command had not thought about Special Heli-Borne Operation, it was Sagat who decided to use helicopters to move rapidly and to paralyze enemy morale.

A normal Brigade consists minimum of 3 regular Infantry Battalions (roughly 800 men in each Battalion), generally a squadron of tanks (14 tanks), components of other tail arms and its operations are supported by Artillery guns. But 202 Adhoc Brigade had just one regular Infantry battalion –  31 Punjab, 91 Mujahid, 2 companies of 12 Azad Kashmir Rifles (joined 202 towards the ned of Nov 71) and a battery of field artillery guns.

The full-fledged war started on 3rd Dec and Indian forces started making advance in East Pakistan. On 6th Dec, the Indian Army’s Eastern Command HQ intercepted a coded Pakistani wireless communication. Deciphered information told Indian Army that an unknown Pakistani brigade in the Sylhet-Maulvi Bazar-Chandpur area was ordered to move to an unknown destination. Indian higher command concluded that it could be the brigade in Sylhet that is falling back to defend either Meghna (river) crossing or Dacca itself, hence Sylhet could be captured!

But the Eastern Command had not thought about Special Heli-Borne Operation, it was Sagat who decided to use helicopters to move rapidly and to paralyze enemy morale.

On 6th Dec, Sagat called Group Captain Chandan Singh and asked him to fly to Sylhet and take the surrender of the Pakistani garrison there. There was no indication of surrender, the information available was of withdrawal of Pak brigade but a lot was going on in Sagat’s mind and sending Chandan to Sylhet was just a part of his plan.

In the Officer’s mess that night, while drinking his usual whiskey (Sagat was a heavy drinker, who would mix different brands and types and still stay in his senses), Sagat asked his Colonel General Staff Col Mohinder to ask 8 Mountain Division to plan an SHBO. Mahinder was confused and clueless, as he had not heard this term ever and looked at everyone around for some enlightenment. After a few minutes, Sagat explained to him that 8 Mountain Div need to plan a Special Heli-Borne Operation.

Group Captain Chandan flew to Sylhet in his Alouette helicopter. He was feeling very proud; after all he was given the opportunity by the Corps commander to take the first surrender of the war. Flying over the town, he did not see a soul. It was like a ghost town. He circled over the town twice and feeling more confident, he flew towards the airport. He was expecting Pakistanis lined up to surrender but again, there wasn’t a soul. Chandan got a bit suspicious but thought that may be Pakistanis were hiding and would emerge once he landed. So he went against his instinct and just before the touch down, bullets from every direction welcomed him. The fuselage of his helicopter got perforated by bullet holes and using every bit of the power of the engine, he managed to get away. One half of his mind was still asking him to give benefit of doubt to Pakistanis and try again. But then better sense prevailed and he flew back to Shamshernagar.

Battalion’s fighting strength was down to 50-60%. Not an ideal selection but time was of great essence and they had to pick a unit that could complete the operation successfully at such short notice. Krishna Rao had his reason…

Chandan was very upset as he was sent in harm’s way with incorrect information. He went straight for Sagat and told him about his near death experience. Sagat’s stone cold and prompt response was, “In that case, we launch a heliborne operation against Sylhet. Now that you are with us, you will stay with us.”

As Chandan said, “He did not bat an eyelid. It made no difference to him if I was hit or not. He did not express any sympathy or even apologise that the information about the surrender of Pakistani garrison was incorrect. Sagat belonged to that rare breed of commanders who had only the mission in mind regardless of all.”

Sagat asked Chandan to go to Kalaura to pick up Commander 59 Mountain Brigade, Brig CA (Bunty) Quinn and fly to Sylhet to select a landing zone. And later that day, Chandan was to take charge of the 110 Helicopter Squadron that was landing at Kailashahar. Chandan was to use those Mi-4 helicopters to complete the heliborne operation that day itself.

Sagat had already discussed this operation with 8 Mountain Division commander – Maj Gen KV Krishna Rao and they had selected 4/5 Gurkha Rifles for this operation. 4/5 GR had already fought two bloody battles (Battle of Atgram on 20/21 November and Battle of Gazipur on 4/5 December). Gurkhas paid a heavy price for these victories – 7 officers, 3 JCOs and 92 other ranks. Out of these, 3 officers, 1 JCO and 13 other ranks were killed and rest were wounded. Battalion’s fighting strength was down to 50-60%. Not an ideal selection but time was of great essence and they had to pick a unit that could complete the operation successfully at such short notice. Krishna Rao had his reason, “It (4/5 GR) was the best battalion in my Division. It had great pride and esprit de corps; a feeling that nothing will deter us (sic) and they were prepared to make any sacrifice.”

The ball started rolling, at a fast pace.