In the above video, Brigadier Baqir Siddiqui, Chief of Staff, Eastern Command of Pakistan Army surrenders with his 12,000 men before Indian Army Major General Gandharv Nagra on December 21, 1971.

This is a less publicized and less well-known surrender ceremony which took place on December 21 1971, days after the first surrender by Niazi’s forces

Within 13 days of start of war, Indian military decimated pakistani forces and liberated Bangladesh from the clutches of pakjabis. The resulting surrender of 90,000 pakistani military personnel was largest in number of prisoners of war since World War II. 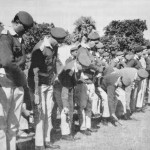 The Instrument of Surrender of Pakistani forces stationed in East Pakistan was signed at Ramna Race Course in Dhaka at 16.31 IST on 16 December 1971, by Lieutenant General Jagjit Singh Aurora, General Officer Commanding-in-chief of Eastern Command of the Indian Army and Lieutenant General A. A. K. Niazi, Commander of Pakistani forces in East Pakistan.

For Pakistan it was a complete and humiliating defeat, a psychological setback that came from a defeat at the hands of intense rival India.

Pakistan lost half its territory, significant portion of its economy and its geo-political role in South Asia.

The loss of East Pakistan had shattered the prestige of the Pakistani military. Pakistan lost half its navy, a quarter of its air force and a third of its army.

The Pakistani people were not mentally prepared to accept defeat, the state-controlled media in West Pakistan had been projecting imaginary victories. When the surrender in East Pakistan was finally announced, people could not come terms with the magnitude of defeat, spontaneous demonstrations and mass protests erupted on the streets of major cities in West Pakistan. Also, referring to the remaining rump Western Pakistan as simply “Pakistan” added to the effect of the defeat as international acceptance of the secession of the eastern half of the country and its creation as the independent state of Bangladesh developed and was given more credence. The cost of the war for Pakistan in monetary and human resources was very high. Demoralized and finding himself unable to control the situation, General Yahya Khan surrendered power to Zulfiqar Ali Bhutto who was sworn-in on 20 December 1971 as President and as the (first civilian) Chief Martial Law Administrator. A new and smaller western-based Pakistan emerged on 16 December 1971.

2 thoughts on “1971: Surrender of Pakistani Troops”