1962 Sino-Indian War: The Occupation of Tibet by China and the American Secret War 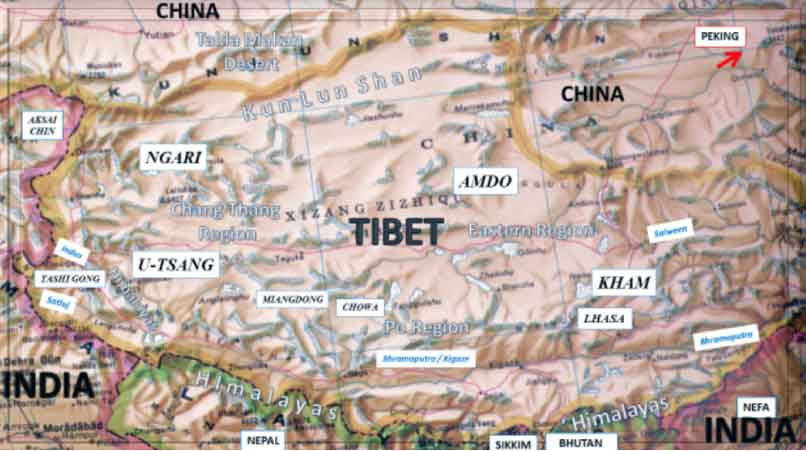 This is the second of the series and is aimed to present details of the occupation of Tibet by the People’s Liberation Army (PLA), followed by the American Secret War in Tibet, both events which preceded the Sino-Indian war of 1962. It is recommended that this be read in continuation with (1962, The Sino-Indian War: Reflections of the Past) which provides an overview of the war and sets the stage.

This part provides an insight on the socio-cultural conditions of Tibet as it was in the fifties, its occupation by the PLA, followed by the American Secret War, which to a great extent was instrumental in creating the conditions for the Sino-Indian war. These parts have been extracted from the book: ‘The Crimson Chinar-The Kashmir Conflict: A Politico-Military Perspective’ with a purpose, as the general perception is that the main cause of the conflict was a territorial dispute – this is far from the truth.

Ironically, when there seemed a chance of the Khampa rebellion succeeding, the US aid stopped abruptly. America played the game – but it was Tibet and India who lost the match.

These issues are important to highlight as in the decade after the intervention of China in Tibet, when India did nothing, China only grew stronger and by the time the CIA upped the ante in Tibet, it was too late. Ironically, when there seemed a chance of the Khampa rebellion succeeding, the US aid stopped abruptly. America played the game – but it was Tibet and India who lost the match. What cannot be condoned is that having appreciated the threat, very little was done to build up the infrastructure and bolster the military to be better poised to take up the Chinese challenge. At the same time the nation was not taken into confidence, which resulted as a deep sense of ‘betrayal.’ A corollary from the first Kashmir War needs to be pointed. Pundit Nehru had rightly homed on to Mirpur and Domel as the objectives for the successful termination of the war. However, even then Mr. Nehru had not converted his strategic aim into a tangible action plan. In 1950, Pundit Nehru’s strategic sense again told him what was required to be done; however, he did not translate these into actions to achieve the desired aims. In hindsight, what cannot be denied was that while his ‘perception’ and ‘judgement’ was proved correct, his ‘prescription’ for the malady was found wanting.

A Brief History of Tibet

It is said that in Sanskrit, the land of Tibet was known as ‘Divat’ (Divine Region), and this got degenerated to ‘Tibat’ which later got anglicised to ‘Tibet.’ There is another interpretation that the name Tibet has been derived from the Persian word ‘Tubbat’ meaning ‘the heights.’ It can be seen from these interpretations that the linkage of Tibet had never been towards China and more with the sub-continent.

Historically, Tibet had always retained her autonomy, even during the Manchu times when for the first time China established her suzerainty over Tibet; this arrangement was similar to the type she also had over Nepal, Sikkim, and Bhutan or for that matter over the Mir of Hunza[1]in North Kashmir. Though, Tibet had always been militarily weaker, there was a time in 763 AD when she had conquered large parts of China and it was only after the spread of Buddhism that the Tibetan outlook became pacifist, in deference with the teachings of Buddhism. Taking advantage of the situation, Peking kept chipping at the frontier provinces and parts of border province of Amdo were taken over in 1724 and four years later even Eastern Kham had been incorporated and it were these provinces which were the first to rise in rebellion for the cause of the Dalai Lama and for Tibetan independence.

Historically, Tibet had always retained her autonomy, even during the Manchu times…

By 1750, the Chinese had taken over Tibet completely and due to this, the Dalai Lama was forced to accept Chinese suzerainty, though this was affected as a distinctive system of the ‘Priest-Patron’ relationship. The patron, in this case China, in return of the acknowledgement of her suzerainty ensured the security of the Priest or the Dalai Lama. This arrangement lasted till the early twentieth century when the Qing Government alarmed at the British inroads into Tibet commenced their campaign to integrate Tibet and their military expedition of 1905 carried out large scale destruction of monasteries in their process of re-unification of Tibet and bringing it into the Chinese fold. By 1908, the situation had deteriorated to such an extent that the Thirteenth Dalai Lama, the predecessor of the present Dalai Lama was even forced to flee to India.

It was due to the collapse of the Qing Dynasty in 1911 that Tibet gained ‘de-facto’ independence and the Dalai Lama, now restored at the Patola Palace, expelled the Chinese ‘Amban’ (Resident). The Dalai Lama publically proclaimed that the relationship between China and Tibet of the patron and priest had never decreed the subordination of one to the other. In other words, he indirectly proclaimed that China had never been suzerain to Tibet, though this could not be substantiated, since in all previous treaties, the pre-eminence of China had been acknowledged. Notwithstanding, the Dalai Lama in making this proclamation was declaring the Independence of his country, though no country, including the British, who would have benefitted by the move, recognised the new de-facto if not  de-jure  reality.

The Chinese Occupation of Tibet

The ‘invasion of Tibet’ commenced on 7 October 1950 when 80,000[2] Chinese troops outnumbered the ill prepared Tibetans at Chamdo in the east of Tibet and by 19 October, the Tibetan army had surrendered having suffered around 5,700 casualties. The conduct of the PLA after taking the surrender was remarkable and is a lesson for the psychological shaping of the battle space. The captured Tibetan soldiers were given a short but intense exposé to the ‘socialist way of collective life,’ and after this brief introduction to this wonderful new way of life which promised ‘equality’ and ‘opportunity’ for all, especially the underprivileged, the perplexed soldiers were given some money and asked to return to their homes to spread the word of their deliverance through Communism.[3]

The Dalai Lama publically proclaimed that the relationship between China and Tibet of the patron and priest had never decreed the subordination of one to the other.

Having achieved the initial success at little cost, the PLA then proceeded to Central Tibet but halted two hundred Kms short of Lhasa, at what they claimed their de jure boundary with Tibet.[4]Despite their overwhelming superiority, the PLA applied soft tactics and attempted a ‘peaceful liberation’ which was a classic ploy to ‘win the hearts and minds’ of the Tibetans. Initially they were successful as the hapless Tibetans had no answer for such an approach. On the other hand, the Chinese were acutely conscious that their actions were being closely watched by the world. The PLA took on large scale developmental and targeted the lower strata of the populace who were constantly reminded of their good fortune of being ‘liberated from the serfdom of centuries’ and this was bound to hit the right cord. Ngapoi Jigme, who had earlier been a Governor and had been made a prisoner, was chosen as an intermediary to negotiate with the Dalai Lama[5]and the bait put forward was that if the Tibetans accept ‘peaceful liberation,’ they could continue with their lives, and the elite could retain their perks and privileges.

However, the initial experiences of the PLA were actually unpleasant. Unaccustomed to the Tibetan way of life and un-acclimatised to the harsh and rarefied atmosphere, and desperately short of supplies, the PLA were forced to scrounge from the already scarce resources of Kham and Amdo and this led to unrest and even triggered off minor clashes. In the meantime, Tibet had also appealed to the world’s conscience through the UN and it needs to be highlighted that it was only tiny El Salvador who supported the Tibetan cause in the UN. On the other hand, India who had recognised the PRC nearly a year earlier, ensured that the resolution to support Tibet never comes up for discussion and in the absence of support, the UN did not deem it necessary to even discuss Tibet and the Chinese annexation. The Chinese strategy and Indian diplomacy worked and Tibet remained forgotten, as it had been for centuries.

Despite their overwhelming superiority, the PLA applied soft tactics and attempted a ‘peaceful liberation’ which was a classic ploy to ‘win the hearts and minds’ of the Tibetans.

However, despite the muted global response, the reassertion of Chinese authority in Tibet invoked strong emotive reactions from Indian people, as seen from the acrimonious proceedings inside and outside the Indian Parliament. India initially tried to restrain China diplomatically and maintain the ‘status quo’ by linking their support for China’s entry into the UN. However, this had no effect and China moved in quietly to occupy Tibet and China’s retort to the Indian protests in the media was sharp and unambiguous. “Tibet is an integral part of China and the problem of Tibet is entirely a domestic problem of China.”[6]

The Chinese started their socialist reforms in Tibet which alienated the already restless Khampas and Amdowans and it was from the Khampas merchants that the first leader revolutionary sprung up when Tashi Andrugtsang rose up to organise an armed resistance against the PLA. By 1956, he had united various tribes and the rebellion became a large scale organised resistance, albeit limited to the countryside. “In early 1956, Chinese outposts were brazenly attacked, communications cut off, and Chinese garrisons stationed in several provinces in Kham were completely wiped out by the Khampa Guerrillas.”[7]The local Khampas and Ambowans had the advantage of knowledge of the terrain and were obviously used to the harsh conditions.

While the rebellion was increasing in intensity, the fifteen year old fourteenth Dalai Lama was kept inured from the conflict, as both sides felt it prudent to keep Lhasa’s temporal power out of the confrontation. It was only in mid-1955 that the Dalai Lama saw for himself the conditions that prevailed and the fight being undertaken for the independence of Tibet, on his behalf. However, due to his pacifist desire to prevent further suffering, the Dalai Lama did not undertake any direct action and it was left to his brother, Gyapo Thondup to contact the CIA on the behalf of Andrugtsang and the Dalai Lama and request for American assistance to support the rebellion.

2 thoughts on “1962 Sino-Indian War: The Occupation of Tibet by China and the American Secret War”