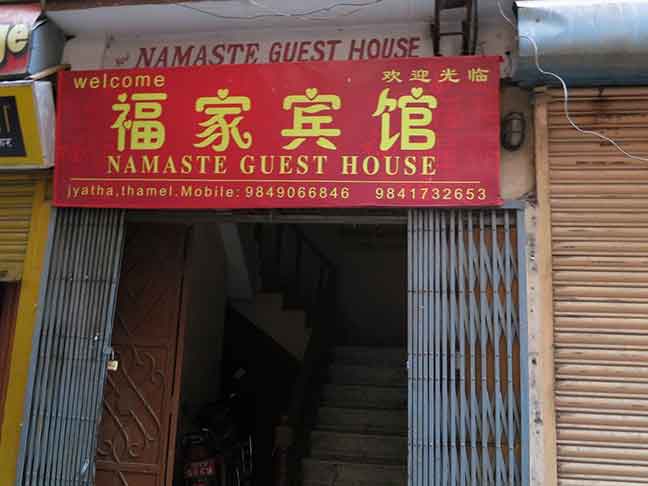 Nepal has become a full-fledged colony of China, with the Nepali leaders repeating blindly what Beijing tell them to say, using even the Chinese Communist jargon.

…the Nepalese police has installed hi-tech, night-vision CCTV cameras in areas to curb the anti-China activities (read Tibetan) in Kathmandu which has become of the favorite spots for the Chinese tourists to spend their holidays.

Maskey, who was on an official visit to Tibet, added that his government (and people of Nepal) “firmly adhere to the one-China policy, and firmly suppress the Dalai Clique’s any anti-China activities on Nepali territory”.

The Ambassador declared that “under the leadership of the Communist Party of China, Tibet has overcome severe natural conditions and made outstanding achievements in economy and other social industries. We are impressed by the beautiful modernized Tibet and happy life of all ethnic groups in Tibet.”

Is it Nepalese language or Communist jargon?

Mahesh Kumar Maskey also declared that he hopes to see more cooperation opportunities with China’s Tibet and enhance the bilateral relationship between Nepal and China. He emphasized that his country “has persistently adhered to China’s Tibet policy.”

Is the Ambassador aware of the 1856 Treaty between Nepal and Tibet?

Inter alia, the Treaty says: “the Gurkha (Nepal) Government will in future give all the assistance that may be in its power to the Government of Tibet, if the troops of any other ‘raja’ invade that country.”

When ‘Raja’ Mao invaded Tibet in 1950, this clause was conveniently forgotten.

The situation has today worsened.

It was later reported that the Nepalese police has installed hi-tech, night-vision CCTV cameras in areas to curb the anti-China activities (read Tibetan) in Kathmandu which has become of the favorite spots for the Chinese tourists to spend their holidays.

Recently, The South China Morning Post reported: “Restaurants, hotels and even a hospital in the capital’s Thamel district offer services to visitors from the north, in their own language.”

One area in the Thamel (Kathmandu’s tourist hub) has become “a cluster of Chinese commerce – restaurants, hotels, travel agencies, shops and even a hospital in this backpackers’ haven are strictly targeting Nepal’s northern neighbours.”

The Hong Kong newspaper said: “With the country’s tourism scene dominated by the influx of Chinese tourists lately, businesses targeting them are also mushrooming. The street that borders the tourist district with the traditional neighbourhood of Jyatha is a prime example. This stretch of street is crowded with signs in Chinese: Hotels offer their room rates and services, restaurants display their menus and travel agencies plaster their windows with itineraries strictly in the script that would attract their targeted customers.”

The tour guides and travel agencies have been ordered to take full responsibility for their Chinese tourists’ uncivilized manners and behaviour.

According to the Immigration Office at Kathmandu’s Tribhuvan International Airport, Chinese tourists increased by 25.7 per cent in June compared with the same month last year.

After a bilateral agreement signed between China and Nepal in 2001, Kathmandu has received an Approved Destination Status. Today, there are direct flights to Kathmandu from Kunming , Guangzhou, Chengdu and Hong Kong.

Of course, these figures are not comparable with the inflow of Han tourists in Lhasa. During this year’s Shoton (Yoghurt) Festival, Lhasa received a record 1.38 million tourists.

The week-long event, which has just ended brought 50 million U.S. dollars as a revenue for Lhasa Municipality, an increase of 15% compared to last year.

According to the Chinese media: “The festival started with the ‘sunning of the Buddha’ ceremony held in the 600-year-old Drepung Monastery, where pious Buddhists prayed to a 1,480-square-meter portrait of Buddha.Festival organizers also staged an exhibition dedicated to ‘Thangkas’, painted Tibetan scrolls with a history of more than 1,300 years. Tibetan opera performances were also staged at the Norbulingka Park during the festival, attracting more than 80,000 people each day.”It further gives a historical background: “The festival was originally a religious occasion, when local people would offer yogurt to monks who had finished meditation retreats. It has been held since the 17th century.”

I have mentioned some of these festivals in a previous posting: The Disneyland of Snows.

Nepal has become a full-fledged colony of China, with the Nepali leaders repeating blindly what Beijing tell them to say, using even the Chinese Communist jargon.

In the meantime, China Outbound Tourism Research Institute said that China will cross the 100 million overseas tourists a year earlier than expected. However, the growth of Chinese tourist spending could slow down as a result of the continuing crackdown on corruption.

The Germany-based Institute has forecast that from July 1 to June 30 next year, 106 million Chinese tourists will travel abroad and spend US$ 129 billion (that is a lot of money).

The United Nations World Tourism Organisation had predicted that the mark would be reached in 2015 ‘only’.

The increasing number of Chinese tourists explains that the National Tourism Administration in Beijing asked them to improve the image that they give of their country.

The tour guides and travel agencies have been ordered to take full responsibility for their Chinese tourists’ uncivilized manners and behaviour.

The Chinese administration is also considering including a requirement regarding civil behavior in the contract.

The Guangming Daily says that the ‘five annoying mannerisms’ of Chinese tourists are: talking loudly in public, littering, spitting, not following orders, and damaging culture relics.

One can presume that this is also valid for many other countries.