Nehru and the ‘pending’ case of Tibet in United Nations 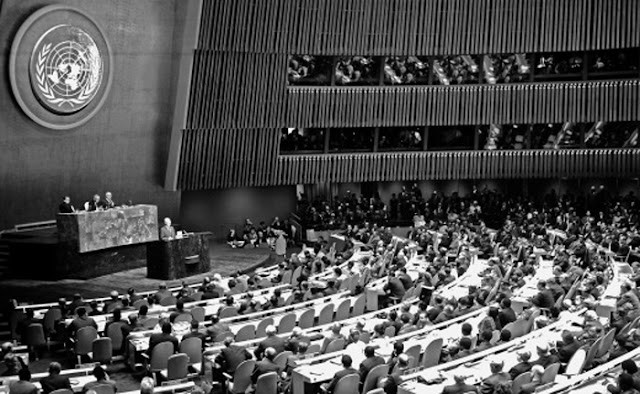 On September 30, Russia held four referenda with the objective of annexing Luhansk, Donetsk, Kherson, Zaporizhzhia regions of Ukraine recently occupied by Moscow; it immediately draw strong condemnation from Kyiv as well as Western nations who called the votes a sham.

Ukrainian President Volodymyr Zelenskiy said: “These are not just crimes against international law and Ukrainian law, these are crimes against specific people, against a nation.”

The G7 foreign ministers released a strong statement saying that Putin’s actions “constitute a new low point in Russia’s blatant flouting of international law. …[The G7 countries] will never recognize these purported annexations, nor the sham ‘referenda’ conducted at gunpoint.”

While the UK and the US announced fresh sanctions against Russia, the European Union strongly condemned the annexation.

At the UN, a resolution, tabled declaring the annexations illegal and demanding an immediate and unconditional withdrawal of all Russia’s military forces from Ukraine, was vetoed by Russia (while China, India, Brazil and Gabon abstained).

Without going into the merits and demerits of the present imbroglio, it is interesting to look at what happened to Tibet in 1950 in the same UN forum, soon after the invasion of the Land of Snows by Communist China.

The Case of Tibet

Early October 1950, Eastern Tibet was occupied by Mao’s troops. The world kept quiet, nobody wanted to know about it, while the Tibetan government was not even queen to inform the world about what had happened to their country …not to make it worse.

By the end of October 1950, things finally began moving in Lhasa, the Cabinet of Ministers (Kashag) decided to appeal to the General Assembly of the UN against the act of this blatant act of aggression.

The Tibetan Government was quite confident in the Nehru’s government who had constantly taken the side of the oppressed people against the imperialist and colonialist powers.

To the Tibetan surprise, Delhi’s reply was that they certainly would support an appeal from Tibet, but it was not ready to sponsor the case.

On November 1, Nehru sent a cable to BN Rau, the Indian Representative in the UN: “Chinese military operations against Tibet have undoubtedly affected our friendly relations with China. But these developments do not affect our general policy or even our policy regarding admission of new China in United Nations.” At that time, Delhi supported the Communists’ admission in the UN (with a seat in the Security Council for Mao!).

Finally, a well-drafted appeal was cabled by the Government of Tibet to the UN on November 7, 1950; it stated that “the Tibetans were racially, culturally and geographically far apart from the Chinese. …The problem is not of Tibet’s own making but is largely the outcome of unthwarted Chinese ambitions to bring weaker nations on her periphery within her active domination.”

The appeal continued: “This unwarranted act of aggression has not only disturbed the peace of Tibet, but is in complete disregard of the solemn assurance given by the Chinese to the Government of India. …the problem is simple. The Chinese claim Tibet as part of China.”

It concluded that Lhasa hoped that “the conscience of the world would not allow the disruption of our State by methods reminiscent of the jungle.”

The appeal eventually was dispatched from Kalimpong, where lived the Tibetan representative in India. This would be objected by the UN bureaucracy, as an appeal is supposed to emanate from the territory of the aggrieved country.

On November 14, The Hindu commented: “India’s support, it is understood, will mainly be based on the ground that the issue could be solved peacefully and without resort to arms and the extent to which there were military operations, world peace was endangered.”

Finally on November 15, it is the tiny State of El Salvador which requested the Secretary General to list the Tibetan appeal on the Agenda of the General Assembly.

During the following days, the procedural battle went on at Lake Success.

On November 20, in a cable to BN Rau, Nehru affirmed: “Draft resolution of El Salvador completely ignores realities of situation and overlooks fact that only result of passing such a resolution will be to precipitate conquest of Tibet and destruction of Tibetan independence and perhaps even autonomy.”

In the meantime, the United Kingdom was in a dilemma; the British had always managed to keep the status of Tibet nebulous, as the vagueness had worked well for years and decades; however, the times were changing; a State could claim to be under the suzerainty of another State and at the same time fully autonomous.

For the British government, it was a real issue.

Was Tibet a State for the British Government?

Surprisingly, after consulting legal experts, His Majesty’s Government accepted the fact that Tibet was a separate State. One of the points of White Hall was that the British Government had concluded a Convention between China, Tibet and herself in 1914 in Simla (and agreed to the McMahon Line with India). The other point was that the Chinese had been expelled from Tibet in 1911 and Tibet had declared her independence two years later. The fact that Tibet had from 1911 to 1950, kept the control of her internal as well as external affairs was certainly qualifying Tibet under Article 35 (2) of the UN Charter as a separate state.

But then India’s position began vacillating, though the Prime Minister admitted to his Representative in New York: “Chinese Government has repeatedly expressed themselves In favour of Tibetan autonomy, but of course we do not know what their idea of autonomy is.”

A few days later, Vijayalaksmi Pandit, Nehru’s sister was quoted as saying: “India’s view that communist China should be given a seat in the UN, …[she thought that], if this had been done earlier, some of the present troubles in Korea might have been avoided” And what about Tibet?

Suddenly an unbelievable argument cropped up, if the opinion of the legal cell of the Foreign Office (stating that Tibet was a separate State) was not changed, the logical conclusion would be that a firm stand (and action) would have to be taken. As a consequence the UN would have to accept that an aggression had been committed and as a result pressures would be exerted by the community of nations to take an action in favour of Tibet. But nobody wanted to take an action!

The British Representative to the UN concluded: “I greatly hope therefore that I shall be instructed when and if the Indians raise this matter in the Security Council, to argue to the general effect that the legal situation is extremely obscure and that in any case Tibet cannot be considered as a fully independent country.”

The British government then asked for another legal opinion from its Attorney General.

At that time, Britain and the USA had made their position known: they would support the stand of the Government of India, but at the last moment, Nehru backed out of the understanding India had given to Tibet.

He requested Washington to refrain from publicity condemning China for its action in Tibet for fear that such condemnation might give credence to China’s claims that Western powers had an interest in Tibet and that the American were exerting an influence over Indian policy.

Nehru wrote these appalling words: “We cannot save Tibet, as we should have liked to do so, and our very attempts to save it might bring greater trouble to it.” India then informed that UN that it would sort out the issue peacefully with China.

A couple of decade ago, a Canadian scholar, Claudia Johnston went through the old UN files and found out that following India’s assurance, the Tibet issue was still pending in the UN.

Obviously, the present case of annexation of parts of Ukraine is different, but the morale remains that it is often the bullies who prevail, at least today, many nations (often big bullies themselves) are ready to object.

The Prime Minister is absolutely right when he says that “this was not the era for war”, but what about Tibet? Will it be forever ‘pending’?