is an Assistant Professor, Department of Political Science, Dibrugarh University, Assam, and can be contacted at editor@spsindia.in 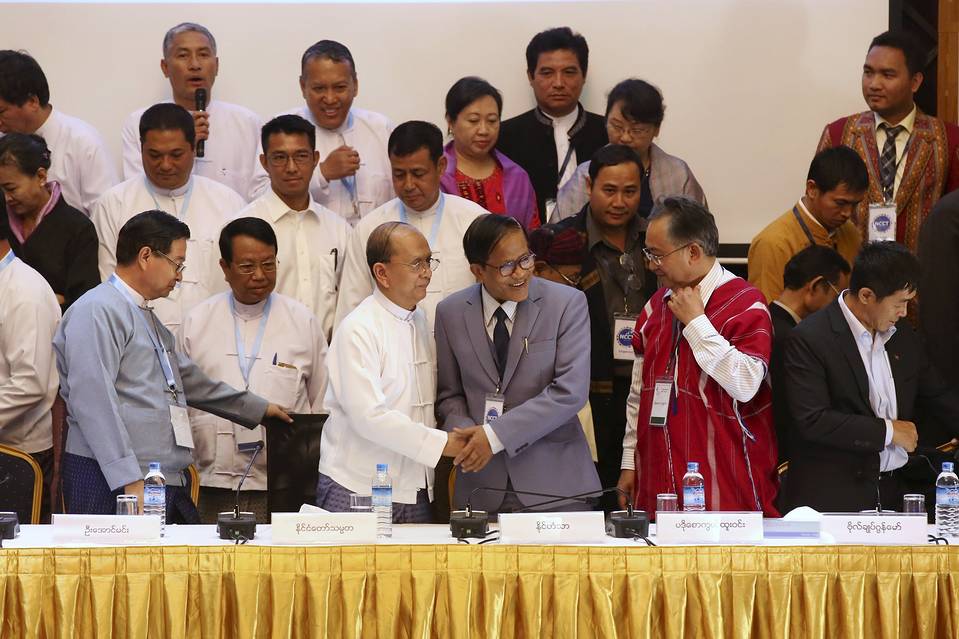 On October 15, 2015, the Thein Sein led-government of Myanmar and eight ethnic organisations signed the final version of a Nationwide Ceasefire Agreement (NCA) which was under negotiation since August 2011.

This agreement has been seen as a momentous achievement for Thein Sein ahead of the November polls. During the military rule in Myanmar there had not been any such collective agreement struck with the ethnic armed groups, making the NCA the first of its kind.

Several international actors, including India, China, the European Union, the US, Australia were involved in the process, both diplomatically and monetarily. The international community has been keen to engage the Thein Sein government in order to enable it in its transition to democracy. Representatives from the United Nations, the European Union, India and China and others witnessed the signing. Lessons learnt from Norway’s successful participation in the Sri Lanka ceasefire initiative with the LTTE in 2002 served as a precursor for the negotiations behind the NCA.

The scourge of ethnic armed rebellion has existed in Myanmar since it gained independence from the British in 1948. Violence between the military junta and the ethnic armed groups led to the displacement and killing of many people, disrupting normal life in large parts of the country. Reports of abuses and high-handedness on part of the military junta were also rife in areas where ethnic armed groups were known to operate. Discrimination against people of certain ethnicities was also reported in spheres like health, education, electricity access and other public facilities.

Ethnic groups represent about 40 percent of Myanmar’s population of 52 million, making them a sizeable group. The continuing denial of basic rights to these ethnic groups was one of the major shortcomings of the Thein Sein government, which had professed a determination towards reforming the ways of the junta after coming to power in 2011, almost half a century after military rule.

The NCA is being commented upon as being ‘historical’ and is seen as a remarkable landmark in the country’s history as it seeks to bring to an end the violence between ethnic armed groups and the junta, which has existed in Myanmar for over six decades. All the groups signing were removed by the government from its list of Unlawful Associations which allowed the prosecution of people related with the groups.

Their removal could enable the groups to join the political mainstream. The main demands of these ethnic armed groups were federalism, autonomy and control over natural resources found in their native regions. With the signing of the NCA it is hoped that all these demands would be met.

The glory of the NCA however is severely dimmed with the absence of some of the most active and restive armed rebel groups. Among them is the largest, the United Wa State Army (UWSA), which has close to 25,000 members operating on the border with China. The Kachin Independence Organisation (KIO), whose Independence Army (KIA) controls large areas of north-eastern Kachin state and has regularly clashed with the Burmese army since a ceasefire collapsed in 2011, also refrained.

The resistance by some of these groups to signing the NCA has been seen as a move provoked by China, although Beijing has denied these allegations. The Myanmar-China border of 2,200 km has often borne the brunt of ethnic conflict, drug trafficking and illegal trade. Such conditions hamper the development and life in China’s south-western Yunnan province.

China is also concerned about the two million estimated Chinese nationals in Myanmar. China is thus keen on ensuring stability along its border with Myanmar, especially as recently violence between ethnic armed groups and the government of Myanmar has spilled over into Chinese territory.

China is also embittered with the increase in the involvement of the US and India in the internal matters of Myanmar, which occurred post the easing of US sanctions and the volte face in India-Myanmar relations since the early 1990s.

There have been reports of China influencing some of the ethnic armed groups of Myanmar like KIO, supplying them with weapons; and it was also known that China was opposed to the NCA as it regretted the involvement of external powers like Japan and the US in the agreement.

India welcomed the NCA and Prime Minister Narendra Modi’s special envoy for northeast R.N. Ravi and former Mizoram chief minister Zoramthanga were present on the occasion. India was intensively involved in the negotiations between the ethnic armed groups and the Thein Sein government, and Zoramthanga, a former rebel leader, held talks with both ethnic armed groups and the government as an interlocutor. India’s National Security Advisor Ajit Doval was also present on the occasion of the signing of the NCA.

The India-Myanmar border has also borne the brunt of clashes between the governments of India and Myanmar against the ethnic armed groups of both nations. India has been constantly negotiating with the Thein Sein government and the junta before them regarding reigning in the ethnic armed groups of India which have safe havens in Myanmar and connections with the rebel groups there. Joint operations have also been launched in the past by both governments against safe havens of Indian armed groups in Myanmar.

As recent as June 9, 2015, there was an operation launched by India along the India-Myanmar border to destroy camps of insurgents from the Nationalist Socialist Council of Nagaland- Khaplang (NSCN-K) and the Kanglei Yawol Kanna Lup (KYKL) groups. India has welcomed the NCA as a step in the right direction to further resolution of all insurgency related issues.

Despite the NCA being celebrated as a historic moment in the history of Myanmar, the NCA has many a lacunae. The deal does not enunciate clearly the kind of balance of power between the central government and the ethnic regions which will emerge nor does it require the ethnic groups to disarm, apart from the fact that some of the main ethnic armed groups resisted signing the NCA.

As the ethnic armed groups demanded a federal constitution, and no such agreement has yet been reached, complicated negotiations lie ahead, especially given the fact that these groups have been able to retain their arms. Gradual disarming of the groups should be factored into the peace process.

Notwithstanding the shortcomings, the NCA is no mean achievement given the fact that it is the first of its kind in the history of the country. The coming together of a collective of the ethnic armed groups, the government of Myanmar as well as international actors to formulate the NCA signals the success of peaceful diplomacy. Some of the groups like the Karen groups which have signed the NCA have been at violent loggerheads with the government for more than 60 years; the NCA has effectively put a stop to such violence, thus is laudable.

Although the NCA does not completely resolve the issue of ethnic armed groups and conflict associated with them, it does serve as a platform for further negotiations and should be seen as a basis for moving forward. Attempts should be made to ensure that the remainder of the groups enter the NCA. Durability of the NCA should be prioritized by the government and the ethnic armed groups by following the agreement, preventing clashes and bolstering negotiations to further the peace process and reach a suitable solution which is consensual and fulfils the demands of all stakeholders.