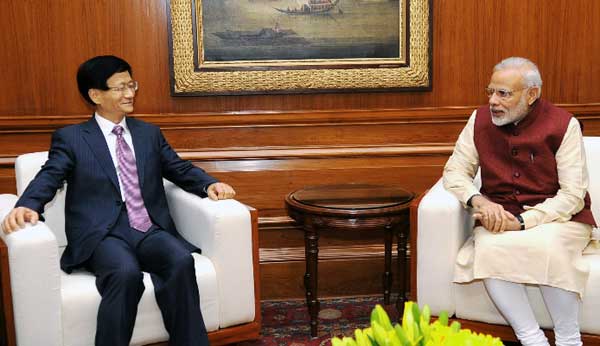 In the brouhaha created by the election of Donald Trump as President of the United States and Prime Minister Modi’s Grand Master Coup against black money, an event of great international importance has been missed by the Indian press.

Meng is not an ordinary official; he is a member of the all-powerful Politburo of the CPC and the person looking after ‘security’ and intelligence in the Middle Kingdom. He has replaced the disgraced Zhou Yongkang, the biggest tiger to fall in Xi Jinping’s net in the latter’s fight against corruption.

What was Meng doing around?

Probaly two things: China was nervous with Modi’s visit to Japan (two days later) and India its tired of terrorism “Made in Pakistan”.

That is why the PM remarked: “Terrorism poses the gravest threat to international peace and security”.

Can India and China find an understanding on the subject?

According to a PMO press release: “The Prime Minister welcomed the intensive exchange of high level visits between India and China over the last two years.”

Nothing new or special in this!

While ‘fondly’ recalling his visit to China in May 2015, as well as his trip to Hangzhou in September 2016 to attend the G-20 Summit, Modi told his visitor: “such visits contribute to building strategic understanding between the two countries”.

Who should talk to Meng?

Strictly speaking, he has no ‘counterpart’ in the Indian government.

Beside the chairmanship of the Political and Legal Affairs Commission, Meng also heads the Central Public Security Comprehensive Management Commission. He is said to be far senior to the Chinese Home Minister and in a way to India’s National Security Advisor. The government finally opted for a meeting with Rajnath Singh, the no 2 in the Indian Cabinet.

During his encounter with Singh, the latter is said to have appealed to Beijing “to support the international community’s efforts to designate as a dreaded terrorist the leader of the Jaish-e-Mohammed, a terrorist group already designated under the UN Resolution 1267.”

Pointing out that Pakistan is patronizing and financing terrorist groups, the Home Minister informed his guest that several leaders of terrorist groups including JeM leader Masood Azhar, Lashkar-eTaiba leader Hafiz Saeed and Hizbul Mujahideen leader Salahuddin could still freely roam in Pakistan. Meng was probably shown proofs that the Tehreek-e-Taliban and Lashkar-e-Jhangvi were financed and sponsored by the ISI.

Rajnath Singh would have argued that there is no good or bad terrorist: terrorism can’t be one country’s problem only, it is a threat to global peace and security.

It had to be dealt globally …by China too!

The Home Minister also mentioned the case of the ULFA leader Paresh Barua, who is facing trial in India for heinous crimes and is believed to have taken refuge in the trijunction between India, Myanmar and China.

That was before the demonetization announcement.

According to the communiqué from North Block, the Minister suggested that India and China should soon conclude negotiations on a bilateral Agreement on Security Cooperation; it would include tackling transnational and cyber crimes (read Pakistan?).

Meng’s reactions are not known, though he is sure to have complained about the Dalai Lama’s forthcoming to Tawang and the ‘splittist’ activities of the Tibetan refugees in India.

We don’t know if the China Pakistan Economic Corridor, passing through Pakistan-occupied-Kashmir, figured in the discussion and if the recent developments on the border in Ladakh were discussed (the PLA tried to stop some irrigation work by the villagers of Demchok). Probably.

It is however certain that Meng, who was announced as President Xi’s Special Envoy has not come to Delhi just to hear a lecture from the Home Minister or the Prime Minister.

Let us not forget that it was just before Modi left to Japan for a crucial visit.

The Indian officials probably got a bit of a lecture from Meng too.

At the end of September, India and China had already agreed to cooperate ‘on counter-terrorism and security’ during their first dialogue on the subject in Beijing.

The Global Times reported: “The two sides exchanged opinions on the international and regional security situation and explained their respective anti-terrorism systems, mechanisms and legislation. They also reached consensus on measures to strengthen cooperation and to jointly deal with security threats.”

The dialogue was jointly chaired by Wang Yongqing, the Secretary General of the Commission for Political and Legal Affairs and R.N. Ravi, chairman of India’s Joint Intelligence Committee.

Interestingly Ravi met Meng Jianzhu, who told him that “terrorism is a common enemy of the global community.”

Meng then added that “strengthened counter-terrorism cooperation between China and India is conducive to the interests of the people of both countries.”

Again according to The Global Times, Meng voiced the hope that the two sides could start some counter-terrorism collaboration in order to protect regional security.

Where is Pakistan in this new scheme?

That was probably one of the topics discussed less than six weeks later in the polluted capital of India. 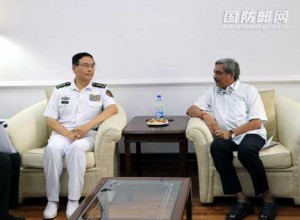 As Meng arrived in Delhi, India and China were holding their 8th meeting of China-India Defense and Security Consultation.

China was represented by Sun Jianguo, the PLA’s deputy chief of the Joint Staff Department (and informal head of China’s intelligence and military diplomacy) and India by its Defense Secretary, Mohan Kumar.

Sun made the routine declaration “both countries have maintained frequent exchanges of visits and reached consensus on the development of bilateral ties in recent years.”

He added that “The Chinese military is willing to join hands with India army to maintain the exchanges on border defense, improve the mechanism of communication and strengthen border management and control so as to safeguard peace and stability in their border areas.”

Kumar was not very explicit too, “exchanges of visits and interactions between Chinese and Indian leaders have promoted the India-China strategic partnership of cooperation, which has also contributed to the common prosperity of the two countries as well as the world peace and development.”

Even if little is known of what transpired during these two important visits (especially Meng’s), the future of the CPEC and China’s protection of its all-weather friend must have received a lot of attention.

The fact is that for mega projects such as the CPEC, China can’t anymore ignore India.

India’s relations with Japan and the new US President are bound to have been come up too.

Asia seems in a flux, with new realignments in the offing. These probably explains the quick succession of ‘exchanges’ at the highest level of the security apparatus between India and China.