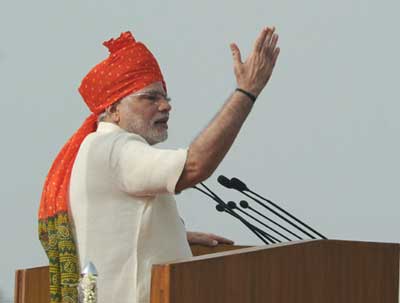 India celebrated its 68th Independence Day with traditional fervour. The environment was charged with a spirit of nationalism. The new Prime Minister of the country, Narendra Modi, infused an exceptional sense of patriotism and hope with a speech that was quite different from those that the Nation has got used to hearing on this day.

Pakistan also celebrated its independence a day earlier, albeit under wholly different circumstances. The opposition parties of the country threw tradition to the winds, on a day which epitomises integration, to showcase the divisiveness that plagues their country. The political leadership of Pakistan has challenged the very foundation of nationhood for which the forefathers of both India and Pakistan collectively fought in the face of terrible deprivation and bloodshed.

By deviating from the established norm he (Modi), very rightly, demonstrated the insignificance of the neighbouring country in the new internal course being charted by India; he also indicated that India does not consider Kashmir to be any different from the other regions of the country.

Despite all the problems that Nawaz Sharif is facing he could not get over the national preoccupation with Kashmir. “We want peaceful resolution of Kashmir… so that by removing this main source of tension Pakistan and India can find new ways to promote their relations,” Nawaz Sharif is quoted to have said on the eve of his country’s Independence Day. The statement has been carried by the Indian newspaper Hindustan Times among others.

Pakistan’s stance becomes all the more incredulous when seen in the context of the plethora of internal problems that the country is facing, ranging from a veritable civil war in North Waziristan; a state of high insurgency in a large number of provinces; the constant threat of a takeover by fundamentalist forces; political polarisation; financial degeneration etc.

In India, the trend has been for the Prime Minister to mention Kashmir and Pakistan in the Independence Day speech. Prime Minister Narendra Modi did not refer to Pakistan or Kashmir in his speech at all. By deviating from the established norm he, very rightly, demonstrated the insignificance of the neighbouring country in the new internal course being charted by India; he also indicated that India does not consider Kashmir to be any different from the other regions of the country. By demonstrating a new confidence with regard to Kashmir, the Prime Minister has heralded a new level of integration of the region with the Indian Union.

The message is very clear, while India feels secure about the situation in Kashmir and wishes to move on to other more challenging and critical issues of development and progress, Pakistan remains stuck to outdated, divisive and inimical postures like a broken record.

Pakistani scribes and commentators often say that by making belligerent statements India scuttles the peace process. Now the ball is in the other court. It is Pakistan that has shown a rigidity of thought and retracted on the promise to move ahead with improvement of ties irrespective of the position on Kashmir. The Prime Minister of Pakistan has made it amply clear that Kashmir will stay central to the proposed secretary level talks slated for August, 25. If this be the case then the talks will serve no purpose. Pakistan will not be able to avail of the hand of friendship extended by Prime Minister Narendra Modi. As a result, Pakistan will not be able to give a boost to the trade ties so necessary for the country to overcome its financial problems.

If his (Nawaz Sharif) oft repeated desire for peace is to be taken at face value then one would be left with no option but to conclude that it is not he but some other power that controls the Kashmir policy of the country.

While the Government of Pakistan carries on with its deceitful rhetoric, the Jihadi elements located there feel no compunction in claiming responsibility for acts of terror that are presently taking place in the Kashmir valley. The Pakistan Rangers continue to give ample support to all infiltration efforts that the Jihadi’s make along the line of control and even the International border in the Jammu region. Nawaz Sharif has been unsuccessful in curbing the export of terror into India as he has consistently promised; he has also been unsuccessful in toning down the diplomatic rhetoric of the so-called “support to the Kashmir cause.” If his oft repeated desire for peace is to be taken at face value then one would be left with no option but to conclude that it is not he but some other power that controls the Kashmir policy of the country. A logical derivative would be that he is bound by the diktats and demands of the Pakistan army-Jihadi nexus whose support is critical for him now more than ever.

It is not as if Prime Minister Narendra Modi is not aware of the situation and sensitive to the security threats posed by Pakistan in Jammu and Kashmir. In the short span of two months that he has been on the chair he has made an unprecedented two trips to the state and on both occasions he has addressed the troops deployed there. The direct interaction with troops is also a significant deviation from earlier precedents. He has openly castigated the neighbouring country for its continued pursuance of a “proxy war” against India. By referring openly to Pakistan’s incapability to engage India in a conventional war he has sent a clear message that India’s magnanimity in not raising the threshold of conflict should not be seen as a sign of weakness or lack of resolve.

The contours of the Pakistan and Kashmir policy of the Government of India are crystal clear. One, India is unlikely to be pressurised by the hype that surrounds the Kashmir issue, so all talk of Kashmir being disputed territory and need for international intervention etc. cuts no ice with the new establishment. Two, India is willing to improve relations with Pakistan but only when the neighbouring country amply demonstrates sincerity; gets over its traditional belligerence and changes the status quo. Three, the might of the Indian Nation is firmly behind its soldiers who have the freedom to do whatever is required to be done to uphold the country’s sovereignty and territorial integrity in the frontier state. Four, India will not hesitate to increase the threshold of conflict should the need arise. One can only hope that Pakistan will get the message loud and clear.

One thought on “Modi’s Independence Day message to Pakistan”