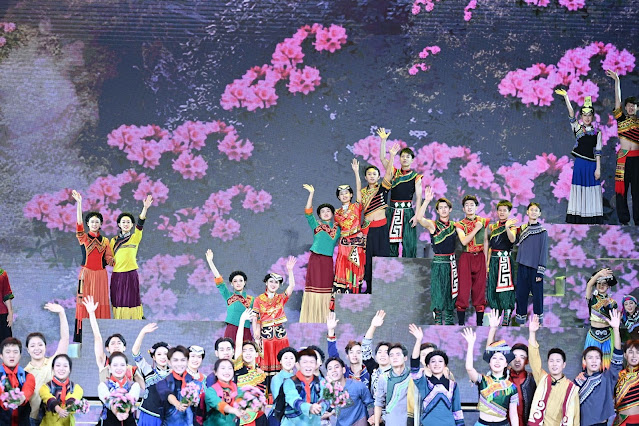 On June 8, China’s Core Leader Xi Jinping visited Haibei Tibetan Autonomous Prefecture in Qinghai Province. Meeting a group of Tibetan villagers relocated in one of the Xiaogang villages (‘moderately well-off’ villages, looking more like ghettos), the General Secretary of the Chinese Communist Party (CCP) told the Tibetan villagers: “the Chinese nation was closely united like the seeds of a pomegranate. We are all members of the community of the Chinese nation.”

We shall never know if the Tibetans agreed …but they had to clap, wave red flags and smile.

This was not the first time that Xi used this expression to talk about ‘ethnic unity’ in China, a country which is supposed to have 56 different minorities.

Already after the Second Xinjiang Work Forum held in Beijing on May 28 and 29, 2014, which was attended by the entire Politburo and over three hundred top CCP’s officials, Xinhua asserted: “The Party’s strategy on Xinjiang has been proven correct and must be continued in the long run.”

A commentator in The China Brief of the Jamestown Foundation noted: “Yet, beneath the boilerplate, the language and policy direction outlined in the Forum statement marks a significant departure. Since the 18th Party Congress [in November 2012], Party officials have stressed that ‘new conditions’ in Xinjiang create ‘new requirements’.”

We know what happened to Xinjiang during the following years (and what still happens today).

During the Forum, Xi Jinping declared: “Xinjiang’s most sustained problem is the problem of ethnic unity,” he continued: “all ethnic groups should show mutual understanding, respect, tolerance and appreciation, and to learn and help each other, so they are tightly bound together like the seeds of a pomegranate.”

In May 2016, Xi visited a Hezhe ethnic village in northeastern Heilongjiang Province. The Hezhe is one of the smallest ethnic minority groups in China; in 1990 their population was 4,300; they are nomads who live mainly from hunting and fishing in the plain formed by the Heilong, Songhua and Wusuli rivers. Their language is said to belong to the Manchu-Tungusic group.

Xi again told them that “all ethnic groups shall remain closely united like the pomegranate seeds on the way toward national rejuvenation.”

What does it mean ‘ethnic unity’ for large (like Tibetans or Uyghur) or smaller minority groups?

In most of the cases, it means assimilation under a Han majority.

Since 1949, Han Chauvinism has heralded doom for the Chinese minorities.

Again, in January 2017, in a letter to an Uygur family, Xi again asked “all ethnic groups to unite like the pomegranate seeds under the CPC leadership to build a bright future for Xinjiang Uygur Autonomous Region.”

Xi also used this expression during an inspection of Inner Mongolia Autonomous Region in 2019.

But let us take a very concrete example of the delegates from Tibet to the 13th National People’s Congress to find out if ethnic equality really exists in China today. Out of 20 members, the ‘Tibet’ delegation has 6 Chinese Hans, three big shots nominated by Beijing, Zhao Kezhi, Minister of Public Security, member of Political and Legal Commission, China’s Cop no 1; Jing Hanchao, member of the Supreme People’s Procuratorate, equivalent to a Supreme Court judge and Guo Qingping, Chairman of People’s Bank of China (for the finances, I presume). Among ‘local’ Hans (also nominated by Beijing) are Wu Yingjie, Party Secretary of the Tibet Autonomous Region (TAR) and Maj Gen Liu Guorong, TAR Commander of the People’s Armed Police.

Is it what China meant by ‘unity’, considering that the Tibetan delegates are mostly nameless individuals, selected (by Beijing) for their love for the Party only?

It is doubtful if the senior Chinese ‘Tibet’ representatives really ‘mingle’ like pomegranate seeds with their Tibetan colleagues.

Let us look at the ethnic minorities in the delegation of the People’s Liberation Army (PLA) and PAP to 19th Congress help in October 2017.

Out of 2280 delegates, only 11.5% (262) were from ethnic minorities. The PLA/PAP has 303 delegates, the Manchus and Tibetans have three delegates each, while the Uyghur, Hui and Tujia have two representatives, while the Zhuang, Xibe, Korean, Qiang, Bai and Naxi ethnicities have one.

Two of the three Tibetan delegates are two young lady officers (Kalsang and Sonam Dolma); their qualification/rank is unknown, but obviously low.

What does ‘ethnic unity’ mean in these conditions?

The article of The China Brief already mentioned said: “Since coming to power, Xi Jinping has repeatedly stressed the importance of forging a shared national identity. The ‘China dream’, he contends, is foremost about the great revival of the ‘Chinese nation’ or ‘Chinese race’, a term first coined by Liang Qichao in 1902 and employed by Chinese leaders from Chiang Kai-shek and Mao Zedong to Deng Xiaoping and Jiang Zemin in order to stress the conjoined history, fate and consanguinity of the Chinese people.”

This does not convince the Tibetans.

Chen Quanguo, a former Party Secretary in Tibet, who in 2016 was sent to Xinjiang to ‘pacify the province’ (he was promoted to the politburo in the process) started promoting inter-marriage between Tibetans and Hans before his transfer. Later the same policy of “mingling’ and fusing through increased contact, cooperation and intermarriage”, was encouraged in Xinjiang.

Till recently it remained minimal in Tibet; analysts believed that it was doubtful if the new policy of ‘mingling’ or ‘fusing’ could work on the Roof of the World, with too many decades of suspicion, not to say hatred, between the ‘ethnic’ populations and the ‘occupiers’.

But things are quickly changing, especially after the Seventh Tibet Work Forum held in August 2020 in Beijing.

Already on January 11, 2020, during the Third Session of the TAR Eleventh People’s Congress, some Regulations on the Establishment of a Model Area for the Progress of Ethnic Unity and Progress in the TAR, were adopted.

The first article promotes “the cause of national unity and progress in an all-round way, to consolidate and develop the socialist ethnic relations of equality, solidarity, mutual assistance and harmony;” it says: “In keeping with the awareness of the Chinese Nation Community, Tibet will be established as a model area for the national unity and progress of the nation.”

These regulations are said to have been formulated in accordance to the Chinese Constitution, the Law of the People’s Republic of China on Regional Autonomy and taking into account the realities of the Autonomous Region. But there is huge gap between the theory and reality.

This probably explains the present intensive propaganda campaign launched by Xi Jinping in the recent weeks.

Article 2 of the Regulations deals with the establishment of “a model area of ethnic unity and progress within the administrative region of the Autonomous Region,” while Article 3 speaks of Tibet as “an inalienable part of the great motherland since ancient times, and all ethnic groups are important members of the Chinese family. National unity is the lifeline of the people of all ethnic groups. It is the common responsibility and obligation of the people of all ethnic groups to maintain the motherland’s unity and strengthen national unity.”

And it goes on…

More recently, The China Daily highlighted the cases of four Han-Tibetan intermarriages being “a great demonstration of ethnic unity in this new era of development.”

A few months ago, Xinhua had already touched upon the issue: “According to statistics, there are more than 560 multiethnic families in Metok [near Upper Siang of Arunachal Pradesh]. People of different ethnic groups help each other in farming and animal husbandry, and children of different ethnic groups study in the same classroom. People here celebrate the New Year’s Day, the Lunar New Year, the Tibetan New Year or folk culture festivals of Monpa ethnic group.”

The news agency highlighted the case of Zhang Chunhuan and his family celebrating together the Chinese Lunar New Year. This could be the beginning of a real ‘mingling’ and the disappearence of the Tibetan nation.

The simple fact that tens of articles on the subject have been published in the last few days, shows the Communist Party is facing a serious problem which will not be solved by propaganda alone.

The real question is: can Han Chauvinism disappear from the Middle Kingdom? It is doubtful.