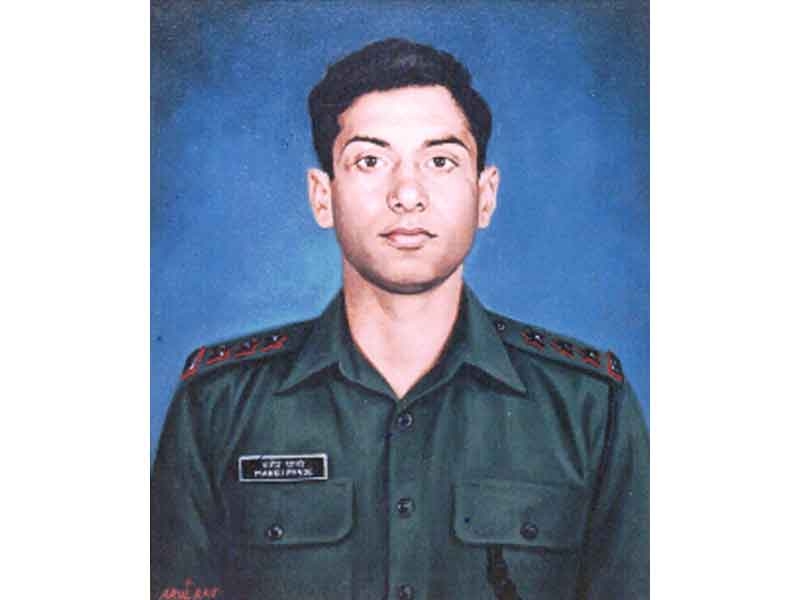 Lieutenant Manoj Kumar Pandey, 1/11 Gorkha Rifles, forced back the intruders from the Batalik sector on 11 June 1999. He led his men to recapture the Jaubar Top, a feature of great operational importance. But his finest hour was in the capture of Khalubar in the early morning hours of 3 July 1999. On the night of 2/3 July 1999 the battalion's progress on to its final objective, was halted by a determined enemy firmly entrenched on commanding heights. Clearing it was critical as the battalion faced the prospect of being day lighted in a vulnerable area. Lieutenant Pandey stepped forward to take on the mission. Quickly sizing up the situation, the young officer led his platoon along a narrow, treacherous ridge that led to the enemy position. While still short of the objective, the enemy fired upon the Indian soldiers effectively stalling the Indian attack. Displaying great courage, he surged ahead of his troops and charged at the enemy with a full-throated battle cry through a hail of bullets. Although wounded in the shoulder and leg, he pressed on his solitary charge with grim determination, till he closed in on the first bunker. Then in ferocious hand-to-hand combat, he killed two of the enemy and cleared the first bunker. It was the turning point. Inspired by their leader's spontaneous valour, the troops charged at the enemy and fell upon them. Unmindful of his grievous wounds, he rushed from bunker to bunker urging his men. On critically bleeding, he collapsed at the final bunker and finally succumbed to his injuries, but not before the last of the enemy had been annihilated. His last words were, "Na Chodnu" (Don't Leave Them). For his sustained display of the most conspicuous personal bravery and junior leadership of the highest order in the face of the enemy, Lieutenant Manoj Kumar Pandey was awarded the Param Vir Chakra, India's highest medal for gallantry, posthumously. His father, Mr. Gopichand Pandey, received the award from the President of India, on behalf of his brave son. Lieutenant Manoj Kumar Panday took part in a series of boldly led attacks during ‘operation Vijay ', forcing back the intruders with heavy losses in Battlik including the capture of Jaubar Top. On the night of 2/3 July 1999 during the advance to Khalubar as his platoon approached its final objective, it came under heavy and intense enemy fire from the surrounding heights. Lieutenant Pandey was tasked to clear the interfering enemy positions to prevent his battalion from getting day lighted, being in a vulnerable position. He quickly moved his platoon to an advantageous position under intense enemy fire, sent one section to clear the enemy positions from the right and himself proceeded to clear the enemy positions from the left. Fearlessly assaulting the first enemy position, he killed two enemy personnel and destroyed the second position by killing two more. He was injured on the shoulder and legs while clearing the third position. Undaunted and without caring for his grievous injuries, he continued to lead the assault on the fourth position urging his men and destroyed the same with a grenade, even as he got a fatal burst on his forehead. This singular daredevil act of Lieutenant Manoj Kumar Pandey provided the critical firm base for the companies, which finally led to capture of Khalubar. The officer, however, succumbed to his injuries. Lieutenant Majoj Kumar Pandey, thus, displayed most conspicuous bravery, indomitable courage, outstanding leadership and devotion to duty and made the supreme sacrifice in the highest traditions of the Indian Army.