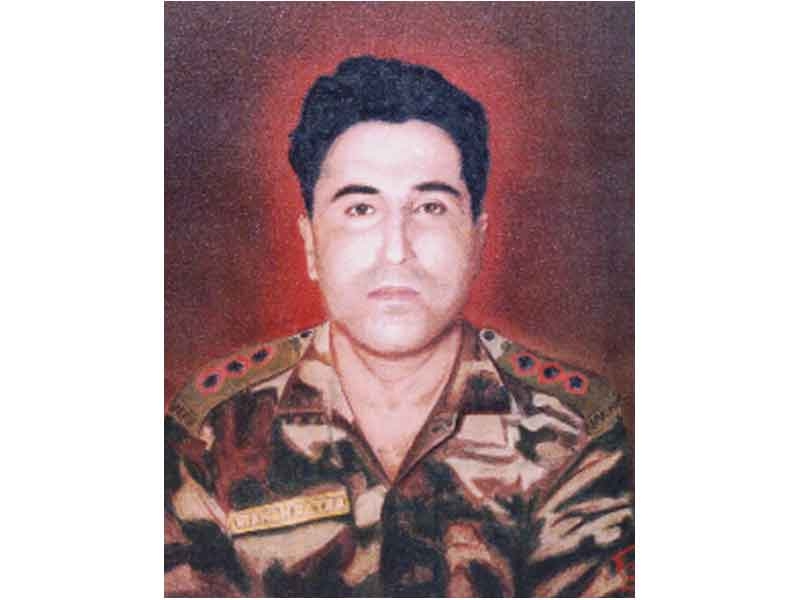 Captain Vikram Batra, 13 JAK Rifles, and his Delta Company was given the task of recapturing Point 5140. Nicknamed Sher Shah for his unstinting courage, he decided to lead the attack from the rear as an element of surprise would help stupefy the enemy. He & his men ascended the sheer rock-cliff and as the group neared the top, the enemy opened machine gun fire on them, pinning them on to the face of the bare rocky cliff. Captain Batra along with five of his men climbed on regardless and after reaching the top, hurled two grenades at the machine gun post. He single handedly engaged three enemy soldiers in close combat and killed them. He was seriously injured during this combat, but insisted on regrouping his men to continue with the given task at hand. Inspired by the extraordinary courage displayed by Captain Batra, the soldiers of 13 JAK Rifles charged the enemy position and captured Point 5140 at 3:30 a.m. on 20 June 1999. His company is credited with killing at least 8 Pakistani soldiers and recovering a heavy machine gun. The capture of Point 5140 set in motion a string of successes like Point 5100, Point 4700, JunctionPeak and Three Pimples. Captain Batra led his men to even more glorious victories with the recapture of Point 4750 and Point 4875. He was tragically killed, when he tried to rescue an injured officer during an enemy counterattack against Point 4875 in the early morning hours of 07 July 1999. His last words were, "Jai Mata Di." For his sustained display of the most conspicuous personal bravery and junior leadership of the highest order in the face of the enemy, Captain Vikram Batra was awarded the Param Vir Chakra, India's highest medal for gallantry, posthumously. His father, Mr. G.L. Batra, received the award from the President of India, on behalf of his brave son. During ‘Operation Vijay’, on 20 June 1999, Captain Vikram Batra, Commander Delta Company was tasked to attack Point 5140. Captain Batra with his company skirted around the feature from the East and maintaining surprise reached within assaulting distance of the enemy. Captain Batra reorganized his column and motivated his men to physically assault the enemy positions. Leading from the front, he in a daredevil assault, pounced on the enemy and killed four of them in a hand-to hand fight. On 7 July 1999, in another operation in the area Pt 4875, his company was tasked to clear a narrow feature with sharp cuttings on either side and heavily fortified enemy defences that covered the only approach to it. For speedy operation, Captain Batra assaulted the enemy position along a narrow ridge and engaged the enemy in a fierce hand –to-hand fight and killed five enemy soldiers at point blank range. Despite sustaining grave injuries, he crawled towards the enemy and hurled grenades clearing the position with utter disregard to his personal safety, leading from the front, he rallied his men and pressed on the attack and achieved a near impossible military task in the face of heavy enemy fire. The officer, however, succumbed to his injuries. Inspired by his daredevil act, his troops fell upon the enemy with vengeance, annihilated them and captured Point 4875. Captain Vikram Batra, thus, displayed the most conspicuous personal bravery and leadership of the highest order in the face of the enemy and made the supreme sacrifice in the highest traditions of the Indian Army.