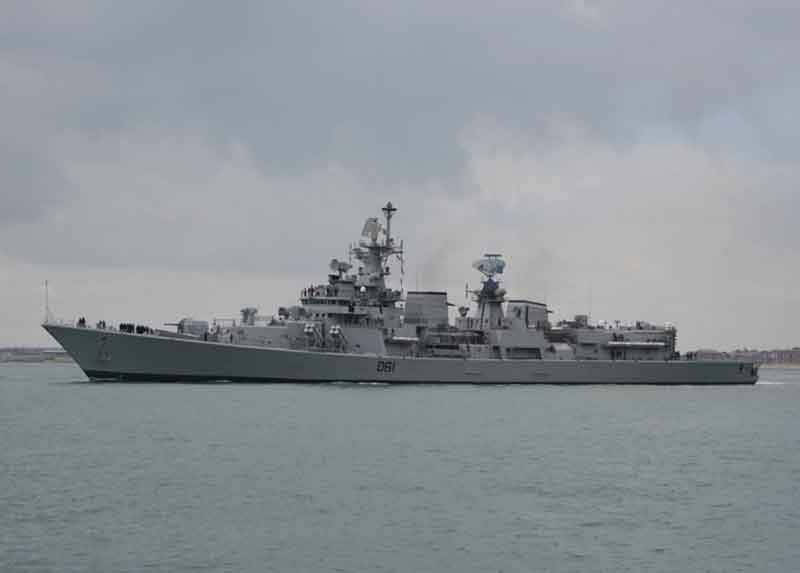 Delhi Class Destroyers were built at the Mazagon Dock Limited in Mumbai and commissioned in: INS Delhi- November 1997, INS Mysore- June 1999, and INS Mumbai- January 2001. The generic and chronological aspects of the Delhi-class destroyer are given in the subsequent paras. Design development of the ‘10th, 11th and 12th frigates’ commenced in 1980. At the initial stage, these ships were to be designed as ‘follow-ons’ to the 7th, 9th and 9th frigates of Project 16 that were to be commissioned in the 1980s as the Godavari class. Commander (later Rear Admiral and DGND) NP Gupta was associated with the design of Project 15 from the design stage till production commenced in end 1987. He recalls: In July 1980, I was shifted to DGND and was asked to work on the design of Project 15 frigates. Work commenced with very brief Staff Requirements in the form of a note from the then DCPT. A new ship design was to be made, based on a mix of Soviet and Western weapon package similar to the Godavari class with the addition of Russian RBU 6000 anti-submarine rockets. Gas turbine propulsion was specified. A very small design team developed the hull from in four months. This design of about 3,500 tonnes displaced and 124 meters LBP (a few meters longer than Godavari) was presented to the Naval Staff as well as the Material Branch, but could not be taken for model tests as the decision with respect to the weapon package and propulsion package ws finalized. In September 1980, a request was made to the Soviet Union for an updated weapon package of Godavari plus RBU 6000. During 1981, there was debate within Naval Headquarters on the selection of the Gas Turbine propulsion package. The contenders were the General Electric LM 2500 and the British Rolls Royce SM 1A. Two separate design studies were carried out in 1981 to integrate the SM 1 A and the LM 2500 in the designed hull. The SM 1 A did not find favour because of its development status and low power output. During 1982, examination continued of a Western anti-missile defence option and of propulsion and weapon configurations. In 1983, the Soviets offered a modern weapon package and also a propulsion package of a reversible gas turbine that made us completely change the platform design. The earlier hull form, of about 3,500 tonnes, just could not take the finally selected weapon and propulsion package. The redesign resulted in a ship 161 meters long and about 6,300 tonnes displacement. It was no longer a frigate. It became a destroyer.