Maldives: Former President Nasheed Gets a tumultuous welcome on his return from Exile 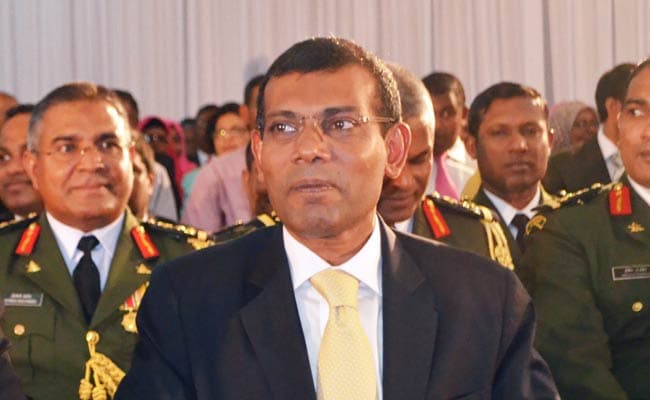 Former President Mohamed Nasheed who returned to his country on 1st November received a tumultuous welcome in Male from his party workers and the whole of Male was a “sea of yellow”.

President-elect Ibrahim Mohamed Solih was present at the airport to receive him.

Nasheed was sentenced to 13 years in prison by Yameen’s regime for detaining Judge Abdulla Mohamed.  After remaining in prison for ten months, Nasheed was allowed to proceed to United Kingdom for a surgery, where he was granted asylum subsequently.

On instructions of President Yameen, the State cancelled the original charge of wrongful detention and recharged Nasheed  under anti-terrorist Act.  The trial was rushed through in 19 days and the Defence Attorneys were not allowed enough time to argue his case and were also treated very shabbily by the Court.

It was the time that the tyrant arranged to have all his opponents charged on terrorism Act even for minor violations of law like holding demonstrations in public places.  Sheikh Imran, the leader of the Adaalath Party was one such victim and has now been released.

Nasheed’s Lawyers filed a case in the UN Working Group on arbitrary detention alleging irregularities in the trial.

The UN Working Group on Arbitrary Detention found that Nasheed’s detention violated the Universal Declaration of Human Rights and International Covenant on civil and political rights  and directed the Maldivian Government to free Nasheed.

The Government under Yameen refused to implement the order on the ground that it was not a ‘binding’ judgement.

Finally, it was on October 20, after the fall of Yameen’s regime that the Supreme Court gathered courage to grant an ‘injunction’ to delay the execution of the thirteen-year sentence until the court carried out a review.

It was due to efforts of Nasheed only that the four opposition parties were united to form the MUO- Maldives United Opposition to take on Yameen in the Presidential elections.  The latter had kept away most of the likely candidates by sending them either to prison or to exile.  It is also to the credit of Nasheed who had initially declared  his intention to run for President to withdraw his nomination in favour of Solih just in time.

Nasheed lost no time in making up with some of the political leaders who turned against him like Qasim Ibrahim, the leader of Jumhooree party and Shekh Imran, the leader of the Adhaalath Party.  Sheikh Imran after his meeting with Nasheed  said that “Nasheed made an exceptional sacrifice for the people of the country”.

Gasim Ibrahim has been elected as the Speaker of the Majlis, a post he desired when Yameen took over and failed to get it and that was the beginning of the rift between Gasim and Yameen!

Another tormentor during Nasheed’s regime Dr. Hassan Saeed, the Judicial administrator who was arrested and jailed after the declaration of emergency has also been released. It is hoped that all those who joined hands to remove Nasheed in 2012 would realise their folly and ensure that they get along well under the Presidentship of Solih.

Nasheed has indicated that he will not take a post under the Solih’s Government.  Nasheed and Solih have been very good friends from the student days and are expected to maintain their friendship.  But who knows?

Nasheed is expected to continue with a major advisory role in the Government as he is too popular and respected by the people.

For China- it should find some way to reduce the debt burden.  Maldives is not Pakistan for one to get over the head of the Prime Minister to talk to the Army.  Here the President is the final authority.  The projects signed so far exceeds 1.5 billion $ and the debt is greater than 40 percent of GDP! The President eect is aware of that.

For India, Nasheed’s statement in one of his visits to India- I quote “I do not want anyone to intervene in my country” should be noted.

This more or less determines what Nasheed expects from India now though at one point of time when Yameen declared an emergency, he wanted India to intervene decisively!