Lull in Ladakh Battle but the War is On 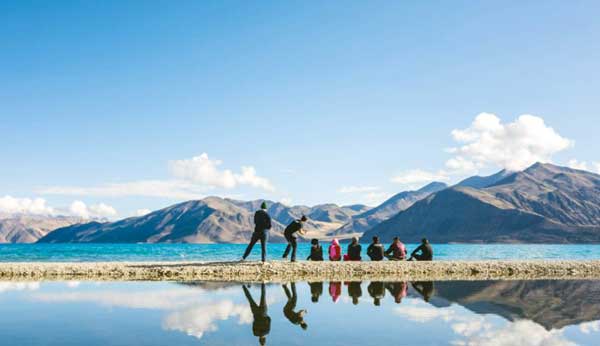 Chinese President Xi Jinping considers war to be the shortest path to world domination. The important thing is that if Xi considers another World War is the shortest path to the establishment of world domination of China then what better time it would be to ignite the fuse when the world is battling the Pandemic. This may be the reason Xi has tasked PLA to be combat-ready 24X7. US and Taiwan are worked up on PLA combat readiness. Globally US is China’s main rival and vice-versa. In Asia, Xi considers India as its political, economic and military rival. He started exerting soon after taking over as President by slicing territories of neighboring countries and territorial waters of littoral states. That is why he tried Dokalm and alters LAC in Ladakh by military action. As Xi moves to realize his dream, none has tasted it better (bitter) than India. Xi’s war overtures have been conspicuous by his unfriendly actions despite India’s friendly overtures. That is why Gen Rawat, as Army Chief had warned the govt against China by seeking readiness for two front war.

During the NDA 1, Raksha Mantri George Fernandes had categorically stated China as enemy No 1, not Pakistan. Ironically successive UPA Govts failed to read the Chinese threat despite numerous aggressive signals even after the Shyam Saran report in 2013 stating that China has sliced off 645 sq kms of Indian territory over and above Aksai Chin & Shaksgam. Ambassador P Stopdan, resident of Ladakh, had said that out of this 645 sq kms, 400 sq kms is of Ladakh. Taking full of Indian lockdown, PLA captured Galwan Heights and Fingers in Ladakh. After Ladakh misadventure, China has constructed a 1000 mtr runway Heliport in Depsong as counter to our DBO Airstrip. China considers Depsong as its strategic vulnerability which is the shortest and easiest approach to interdict their NH-129 and capture Aksai Chin. Hence massive PLA deployment in Ladakh to secure its core interests and to threaten our Road Darbuk-Shyok-DBO.

Chinese pre Xi approach to the global connect had been to ‘seek common ground while reserving differences’, a formula that implies conflict management rather than conflict resolution. But Xi is ushering a fierce and aggressive revolution in the world through his new military policy to achieve political aims. Leaving the world aside, the question is what is his political aim of military action in Ladakh. A reasonable guess is, “to subdue India to accept Chinese version of the 1959 LAC which would secure its National Highway 129 which connects Lhasa to Kashgar in Xinjiang Autonomous Region”. NH 129 runs parallel to Sino-Indian border in Ladakh and closer to the LAC. The road passes through Aksai Chin, an area administered by China but claimed by India. Construction of NH 129 through Aksai China was one of the trigger of 1962 War as well. Aksai Chin is in illegal occupation of China which India resolves to get back about which I have already written. Continuous PLA built up in Pangong-Tso and Depsong Plateau during the standoff would explain that Xi’s is determined to legitimize Chinese claim over Ladakh ingress, Aksai Chin and 1959 LAC. This is in line with Sun Tzu’s doctrine of ‘winning a war without fighting a battle. The political aim of China, to my mind, is to intimidate India by military means or threat of its use to yield to its LAC claim. Capture of Galwan heights and Fingers of Pangong-Tso enables secures NH 129 and Aksai Chin thus.

China is not only aggressive against India and Indian Ocean region. It is aggressive in Indo-pacific and South China Sea. She is waging a multi domain war against the world. In its centenary year, CCP needs a victory and that too a big victory. It would like to engage America in multi friction points to ultimately weaken it so that it can capture Taiwan. World has options to counter China such as QUAD which has become a strategic necessity in the new world order. But India as such has limited options. A belligerent China will not spare an opportunity to exploit our weaknesses along the LAC. PLA will slice a portion whenever allowed. PLA on the LAC is our problem. We should keep it on the tenterhooks 24X7. We need to respond to every action with a counter action. A quid pro quo option must be on the board like use of SSF to control area Black Top.

So far as India is concerned, nothing less than status-quo-ante. China will not give up its claim over Ladakh to subjugate India to accept altered LAC. This situation is alarming. Therefore despite lull in the battle the war is on. Continuous build up in Pangong-Tso and Depsong and the signals coming from frontiers strongly okay the perception. China may advance its deadline to integrate Taiwan due to QUAD etc but as a face saving, it will not withdraw from Eastern Ladakh. Nine rounds of talks between military commanders have yielded nothing. I have no hope in diplomacy as well. Therefore foreign and military policy doctrines need holistic review. We must evolve a new and different Tibet policy and unroll it in conjunction with that for Aksai Chin, Saksgham, Xijiang, Hong Kong and Taiwan to commit China to look inwards. It should have been done before. Now we have a great opportunity in gaining sympathy and support from our neighborhood through ‘Vaccine Maitri’. And unyielding as the Indian Armed forces are, and the Indian people against China because of Wuhan Virus, I am sure the Indian Army will alter all contingencies and aggressions.

Not only India should be prepared for a two and half front war but a multidirectional war from China through Nepal, Bhutan, Bangladesh and Myanmar at some point of time in future. Notwithstanding the Chinese intentions, we should have a strategy on the premise that China will go on offensive once the snow melts. We should not only blunt such threat but go on a fierce counter-offensive once the balloon goes up. We should monitor the movements on three highways and railway lines linking coming to Tibet from mainland. We should plan to counter the Chinese Navy in the Indian Ocean where our Navy has a upper hand. We should keep ready fully acclimatized troops in depth areas and the means of transporting them to the LAC in the shortest possible time. The recent realignment of Punjab based Strike Corps to the Sino-Indian Borders and creating own manufacturing ecosystem to meet own defence requirements (Aatam Nirbhar) are steps in the right direction.

2021 is going to be a year for all of us to remember that it is India and the Indian Army which have stood firm against the China whereas other neighbours have been forced to yield. Nothing could frustrate Xi more than India’s determined resolve to fight back. Initial battle has been checkmated by our determined armed forces and expert medicos. This is immensely unnerving China. Xi’s Sino-Indian war is on despite the lull in battle.