Living in Fear of the Masses 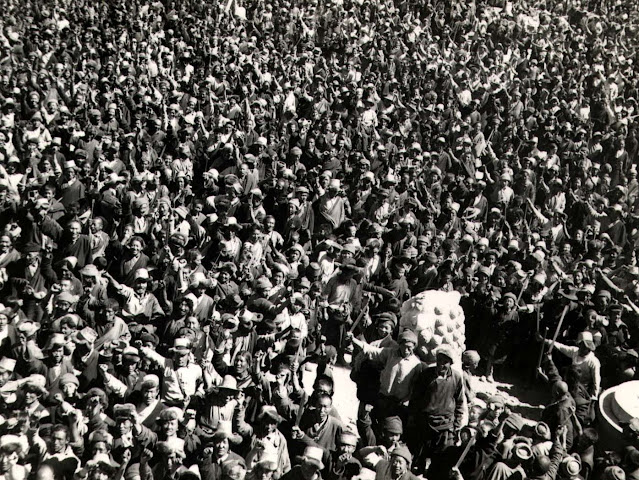 According to a notice from the Metok Border Management Brigade, from March 1, the Chinese authorities will begin “to check border pass, ID cards and other documents of people entering and exiting Metok.”

Metok is the last small, but strategic town near the McMahon Line (north of Upper Siang District of Arunachal Pradesh).

The notice says that the entire Metok region now comes under ‘border management’ and the area will thereafter be restricted: “People entering and leaving must comply with the relevant regulations of the border management area and need to show relevant documents at border checkpoints to be allowed to pass.”

What is strange is that the People’s Liberation Army (PLA) is not exempted from these new restrictions: “officers and soldiers of the PLA and the People’s Armed Police (PAP) who are not stationed in the area must present a certificate issued by the competent department at or above the regimental level to enter and leave the border area.”

The notice adds that if an entire military unit wants to enter or exit the border area, the border inspection department should be notified in advance for inspection.

Why is China so nervous? Fearing Indian infiltrations? Difficult to believe.

Radio Free Asia gives the beginning of an answer: “Chinese authorities in Tibet are tightening security and carrying out arrests in the regional capital Lhasa and along Tibet’s border with Nepal in the run-up to a month of politically sensitive anniversaries beginning in March.”

March is an ‘important’ month; the Two Sessions will take place in Beijing (the meetings of the National People’s Conference and The Chinese People’s Political Consultative Conference), but it is also the anniversary of March 10, the Tibetan Uprising Day, when the entire population in Lhasa revolted against the Communist rule in 1959, forcing the Dalai Lama to escape to India.

RFA gives more information: “Among those taken into custody are Tibetans suspected of sharing information on the deaths of Chinese soldiers killed in a border clash with India last June in the Galwan Valley of Ladakh.”

A source told RFA’s Tibetan Service: “the Chinese government has increased these arrests and crackdowns in Lhasa and in border areas and those who are suspected of exchanging information regarding the deaths of the Chinese soldiers on the border are immediately arrested.”

Beijing also still remembers that on March 14, 2008, riots started in Lhasa; it led to attacks on Chinese nationals and the destruction of many Han shops. The unrest later spread all over Tibet and it took two months for Beijing to regain control of the situation.

In the case of Metok, there is more.

On October 13, 2020, an article in China Tibet News (in Chinese) reported that the Pai-Metok Highway from Pai in Nyingchi City to Metok would be opened on July 1, 2021.

From Nyingchi, the travel time to Metok County would be shortened from 11 to 4.5 hours; the Chinese website said: “On October 12, our reporter learned from the Huaneng Linzhi Hydropower Project Preparation Office that in order to effectively improve the current status of the transportation from Nyingchi to Metok and to effectively improve the livelihood of the villages and towns along the route, the Pai-Metok Highway, is planned to be completed on July 1, 2021.”

What is Huaneng, a dam company, doing in the area?

The answer came less than two months later, The Global Times announced China’s plan to build a large hydropower project on the Yarlung Tsangpo River, which becomes first the Siang and later the Brahmaputra in India.

The Metok County government confirmed that the project would be built in the Metok County, north of the McMahon Line; sources told The Global Time that “the project will be designed by the Chengdu Engineering Corp under the Power Construction Corp of China, or POWERCHINA. The Chengdu company is helping Metok to build the second highway entering the remote county.”

According to Xinhua, the hydropower stations will produce thrice the electricity of the Three Gorges Dam.

Despite these new developments, the 1959 Uprising of the Tibetan ‘masses’ still haunts Communist China.

The first-hand report of Maj SL Chibber, the Indian Consul General in Lhasa to the Ministry of External Affairs in Delhi, is telling; it was clearly a revolt of the ‘masses’ against the Chinese occupiers.

The Chinese propaganda would like us to believe that it was the doing of the Dalai Lama and the ‘upper strata’ of the Tibetan society who rejected the Chinese occupation, it is untrue.

Chibber, who witnessed these momentous days, wrote: “In the history of movement for free Tibet the month of March, 1959, will be most historic as during this month Tibetans high and low, in Lhasa, capital of Tibet, openly challenged the Chinese rule in Tibet. They set up an organisation called – ‘Pho Mimang Ranchen Chi Chog’, meaning, ‘Tibetan Peoples Independent Organisation’, renounced the Sino-Tibetan Agreement of 1951, staged demonstrations to give vent to their anti-Chinese feelings and demanded withdrawal of the Chinese from Tibet. But this challenge, before the MIGHT OF CHINESE People’s Liberation Army, who on 20th March, 1959, started an all out offensive against the ill-organised, ill-equipped, untrained-Tibetans with artillery, mortors, machine guns and all types of automatic weapons, was short lived.”

‘Smelling danger’, the Dalai Lama secretly left Lhasa on the night of March, 17; he would reach the Indian border in the Tawang sector on March 31.

Since then, mighty China shivers every month of March.

Chibber concluded: “In brief the booms of Chinese guns and fire from their weapons, which destroyed number of buildings including religious places, large scale killing of Tibetans followed by mass arrests, departure of Dalai Lama and high-ranking Tibetan officials from Lhasa completely shattered the morale of Tibetans in general and they were left with no other alternative but to bow before the Chinese.

The Indian Consul General concluded: “The future of Tibet is dark and only a miracle can save Tibet from the clutches of the Chinese Communist Colonialists.”

On March 28, 1959, the State Council (Chinese Government) dissolved the Tibet Government and transferred all its functions and powers to the Preparatory Committee for the Tibetan Autonomous Region (TAR), using a few Tibetan puppets in the process. Today, wanting to save face, Beijing celebrates March 28 as the Serfs Emancipation Day.

It is a yearly holiday in Tibet, the day when the ‘reforms’ could finally be implemented, says the Chinese propaganda, explaining that the Tibetan ‘serfs’ had been liberated from feudalism and theocracy; it was simply not true.

Today, after more than 60 years, the Communist Party still lives in fear of the Tibetan masses; they are probably right, even though Marx never explained the meaning of ‘Karma’.

One thought on “Living in Fear of the Masses”