Social media has completely transformed the traditional means and ways of media communication. Social media applications such as Twitter, Facebook, YouTube or WhatsApp are now extensively used by individuals, governments and private organisations to disseminate information and engage in discussions over online platforms. Increasingly, terrorist organisations too are taking to social media, with some quite adept at using these applications even getting into product development, as part of their wider communication strategy.

The Islamic State of Iraq and Syria (ISIS), or Daesh, particularly stands apart in effectively utilising social media platforms for communication. Following up with ISIS, several terrorist outfits such as al Qaeda, Hezbollah, Hamas, Lashkar-e-Taiba and Jaish-e-Mohammad have begun experimenting with this new media. Jamaat-ud-Dawah (JuD), the charity arm of the banned Pakistan-based terrorist outfit Lashkar-e-Taiba (LeT)1, recently even held a two-day conference on social media in Lahore on December 26-27, 2015. The conference marked the formal launch of its cyber initiative in the form of a 24×7 cyber cell, and also a new website named nazariapakistan.com. 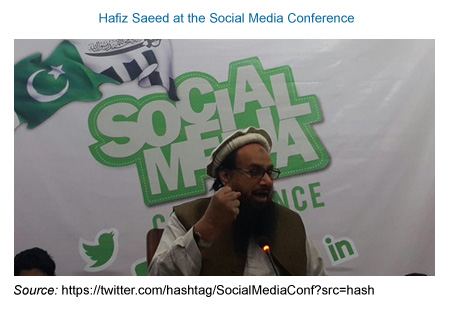 The conference was organised by the JuD Cyber Team, with around 30-40 participants. In his address on “Jihad, Terrorism, ISIS & Impact of Social Media”, chief of JuD Hafiz Muhammad Saeed pressed on the growing importance of social media in disseminating ideology and countering propaganda. Admitting that their organisation is a late entrant in this field, he upheld Daesh as an example worth following on usage of social media to propagate its cause.2Launching the website nazariapakistan.com on the occasion, he called upon the gathering to further strengthen the Kashmiri separatist movement and also take it to the other parts of India through social media.3 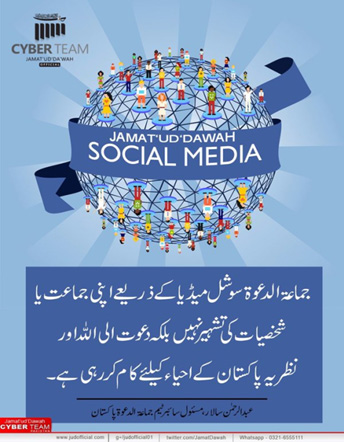 “Jamaat-ud-Dawah is not using social media to promote its party or any person but to only promote the word of the God and working for the defense of the Ideology of Pakistan.”4
– Abdul Rehman Salar, Head of JuD Cyber Team

To further quote the objectives of the conference actively posted by the JuD cyber team on their twitter: “counter propaganda and counter operations need to be waged with trained and eloquent professionals with knowledge” and “social media has become a battlefield of ideas and ideologies; counter/propaganda.”5

A series of lectures highlighting the impact of social media and its potential role in spreading the ideology were held during the conference. Although its handle @JamatDawah has been suspended, the outfit has managed a modest presence on twitter with a different handle @JuDFeeds with some 23.8K tweets and 251 followers. While twitter is used for outreach, the media eye of JuDhttp://jamatdawa.webs.com/ hosts a repository of articles, audio, video and e-library on key figures such as Hafiz Saeed, Abdul Rehman Makki and Abdul Gufar Almadni. Support for the separatist movement in the Kashmir valley is also publicised online through its recently launched websitenazariapakistan.com.

Having realised the strategic importance of social media, LeT now seeks to raise awareness about the imperatives of social media among its cadres. Though the social media conference was held by JuD, a front for the banned LeT, it is very much part of its ongoing effort to help aggregate the separatist movement in Kashmir through modern communication tools.6 In fact, LeT has time and again demonstrated its fascination with modern technology.

The November 2008 Mumbai terror attacks had left the Indian establishment perplexed with the kind of technology LeT attackers were equipped with, which included Global Positioning System (GPS) hand-held devices, satellite phones, Voice over Internet Protocol (VoIP) phone service7 to communicate with their planners back in Pakistan, and also satellite imagery of the targets.

Interestingly, LeT has been quite innovative too with communication tools. Ibotel, an application developed by LeT four years back, is a customised VoIP8application running on cellular communication system, using data services such as 2G or 3G.9 As a security measure, the communication over Ibotel is restricted to few individuals and encrypted as well.

Perhaps, the recent snooping operation on Indian soldiers through legitimate looking smart phone apps such as SmeshApp might have originated from one such source.10 The SmeshApp was available on Google Play Store, just like WhatsApp. Once installed on smart phones, with military personnel as prime targets, it could access photos, location, messaging data, e-mail, browsing data, etc.11 Although this espionage operation was a state-sponsored move, the possibility of tapping the technology expertise available with terror outfits like LeT cannot be ruled out.

Apparently, integrating social media with outreach communication and self-developed android apps gives LeT the necessary leverage to use existing mobile telephony infrastructure. It marks a clear departure for LeT and its associates, from mere technology users to product developers. Given the penetration of smart phones across the country and ease of usability, terror outfits such as LeT pose a potent security threat with their sustained support to the separatist groups in Kashmir and their past record in carrying out large scale terror attacks in India.12

On top of it, encrypted messaging apps with the names of SureSpot or Telegram or the possibilities of home brewed apps have made it extremely difficult to track down the encrypted communication. As terrorist outfits turn their eye towards the underbelly of social media, the amalgamation of messaging apps, social media platforms and snooping apps must have turned many heads in the establishment; if not, then, the sooner the better.

1. Lashkar-e-Taiba (LeT), formed in 1990 in the eastern Kunar Province of Afghanistan and based in Muridke near Lahore in Pakistan, was proscribed by the United Nations in May 2005. Though LeT was banned by the military regime of General Pervez Musharraf back in January 2002, it reportedly operates 16 Islamic institutions, 135 secondary schools, an ambulance service, and mobile clinics, blood banks and several seminaries across Pakistan. See “Lashkar-e-Taiba”, South Asia Terrorism Portal (SATP), athttp://www.satp.org/satporgtp/countries/india/states/jandk/terrorist_outfits/lashkar_e_toiba.htm

6. LeT is outlawed in India. See “List of Banned Terrorist Organisations Under Section 35 of Unlawful Activities (Prevention) Act, 1967”, As on 30-03-2015, Ministry of Home Affairs, Government of India, at http://mha.nic.in/bo

8. A VoIP service/application converts voice into a digital signal which is transmitted over the Internet. The end-to-end encryption is employed to secure digital communication from intrusion.

12.Apart from the December 2001 attack on the Indian Parliament and November 2008 Mumbai terror attacks, LeT is suspected to have carried out various other attacks including the December 2005 attack at the Indian Institute of Science (IISc) in Bangalore, the March 2006 serial bombings in Varanasi and the July 2006 train bombings in Mumbai.
There are reports that LeT has developed a mobile application to secure communication with its operatives in Jammu and Kashmir. See “Hafiz Saeed sets up 24-hour cyber cell to engineer terror attacks against India”, India TV News, December 29, 2015, at http://www.indiatvnews.com/news/india/hafiz-saeed-sets-up-24-hour-cyber-cell-to-engineer-terror-attack-56685.html