Lambs before the dragon 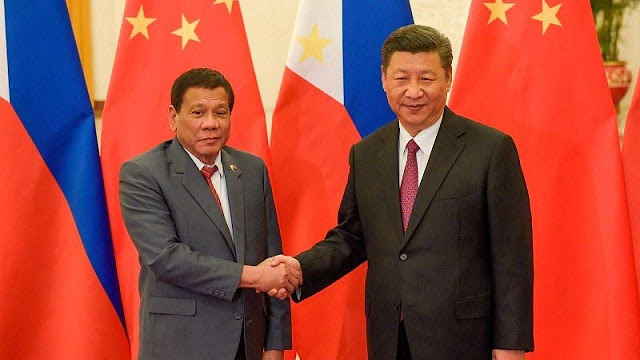 China has managed to tame the wild Tibetans yaks, according to Xinhua: “Under the touch of the petite scientist Yan Ping, the tall and powerful black yak, weighing over 400 kg, is as obedient as a lamb.” And the news agency adds: “Unlike other yaks, this one has no horns.”

Yan, who works for the Lanzhou Institute of Husbandry and Pharmaceutical Sciences explained: “The Ashidan yak has no horns and has a mild temperament, easy to keep and feed.”

Beijing seems to have developed some expertise in taming humans and nations too.

The once-wild President of the Philippines, Rodrigo Duterte is said to have ceded “ground in the South China Sea through an ‘informal’ and ‘undocumented’ [agreement] with President Xi Jinping.”

The Taiwanese newspaper noted that many citizens of the Philippines were “already concerned over the government’s unwillingness to safeguard the territory of the country’s Exclusive Economic Zone (EEZ).” The article concluded that this makes the Duterte government appear even weaker on protecting the nation’s maritime territory.

But it is not only the Philippines which have been tamed and have accepted Beijing’s diktats. India’s Northern neighbour, Nepal, seems to have fallen in the trap.

Newsgram, an independent media agency, recently pointed out that it is the Nepal Government in Kathmandu which forces local journalists to avoid critical reporting on China, the largest investor of the Himalayan land-locked nation.

Anil Giri, the foreign affairs correspondent for The Kathmandu Post, told Voice of America that “journalists are discouraged from covering Tibetan affairs to mollify China and that government officials shy away from commenting on China-related issues. China sponsors junkets for Nepalese journalists and that’s why probably we don’t see lots of criticism about China’s growing investment in Nepal, Chinese doing business in Nepal and China’s growing political clout in Nepal.”

The lamb-lamb attitude in Kathmandu appeared in an incident which recently took place at the Tribhuvan International airport in Kathmandu; The Himalayan Times reported: “Man labelled Dalai Lama’s agent, deported to US”.

Apparently the Nepal immigration mistook a Tibetan called Penpa Tsering, holding a US passport and arriving from the US, with his homonym the former Dalai Lama’s Representative in the US; Nepali officials argued that the man was ‘on China’s most-wanted list’. In Dharamsala, the former Tibetan Representative observed: “It clearly shows that the Chinese government’s pressure on Nepal is working.”

Nepal’s Home Minister Ram Bahadur Thapa affirmed that the deportation was only an act “of honouring the ‘One-China’ policy.”

A few weeks earlier, two members of Nepal’s Parliament, Ekwal Miyan and Pradip Yadav had to apologize for having attended the 7th World Parliamentarians’ Convention on Tibet, which was held in Latvia’s capital Riga between May 7 and 10, after Beijing pressurized Kathmandu.

In a joint press statement, the two MPs declared that they “happened to inadvertently attend the conference …due to wrong information …when they were on a private visit to Turkey, Switzerland and Latvia.”

They had even given speeches by mistake!

At the same time, Xinhua proudly reminded its readers that in the summer of 1921: “a dozen Communist Party of China (CPC) members were forced to leave a small building in the French concession area of Shanghai, and boarded a boat on Nanhu Lake in Jiaxing, Zhejiang Province, concluding the first National Congress of the CPC. …Since then, the [Communist] Party has managed to lead a vulnerable country to move closer toward the world’s center stage.”

The news agency asserted: “The Chinese nation has stood up, grown rich and is becoming strong. …Socialism with Chinese characteristics have maintained stability and vitality in the tide of global changes.”

The Tibetans, who have been tamed more than 60 years ago, are an easy prey. A couple of weeks ago, a Tibetan minister in the Central Tibetan Administration (CTA) in Dharamsala was denied a visa to attend a conference in Mongolia. Karma Gelek Yuthok, Minister of Religion and Culture was to attend the Asian Buddhist Conference in the Mongolian capital, Ulaanbaatar. The minister could only say that it was “the clearest sign yet of China’s aggressive campaign of undermining core democratic freedoms across the world.”

On the Roof of the World, China has now all the cards in hand to nominate its own 15th Dalai Lama. Gyaltsen Norbu, the Panchen Lama selected and groomed by Beijing has been elected as the President of Tibet’s Branch of the Buddhist Association of China. Gyaltsen Norbu recently visited Thailand; on his return to Beijing, he affirmed “We are fortunate to be in the era of the development and rise of New China, and thank the Communist Party of China for leading the Chinese people in achieving the tremendous transformation of standing up, growing rich, and becoming strong.”

In other continents too, nations have to kowtow, though they are slowly waking to the fact that all is not rosy; the examples of Sri Lanka and the Maldives are often cited, but in Africa too.

The Ethiopian Business Review recently had a cover-story: “Africa falling into debt-trap” while The African Exponent, an online outlet for African news dared to write: “Horror Awaits African Leaders as China Withdraws Debt Funding”. It explained: “After an impressive run of a good relationship with China, scooping up at least $9.8bn between 2006 and 2017, making it Africa’s third-largest recipient of Chinese loans, the good ‘friendship’ between the two countries seems to have come to a snag,” commented the Review.

The reporter noted that in September, China promised another $60bn in aid and loans to the continent: “Xi Jinping promised the money would come with no political strings attached’.”

But all good things have an end. When Uhuru Kenyatta, the Kenyan President visited to China in May “the atmosphere that greeted him was unfamiliar to the China of old. Questions were raised about corruption, as well as the figures and sums [that Kenya] had proposed.” Kenyatta did not like it.

The Chinese even wanted to know if he planned to stand for office again in 2022: “It was like talking to the World Bank,” observed an aide to the Kenyan leader.

All this, as well as the recent events in Hong Kong, show that the taming of humans or nations cannot be taken for granted; nobody remains a lamb forever.

My article Lambs before the dragon appeared in the Edit Page of The Pioneer.