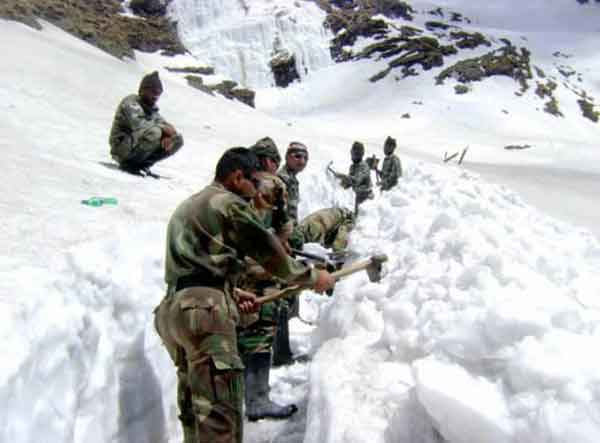 Justice Verma Committee was appointed after the Delhi rape case and the agitations that followed in Delhi and elsewhere in India. The Committee was required to put up recommendations to modify the laws relating to rape and connected offences against women. The Committee had sought suggestions from the public on the issue of laws for protection and safety of women etc.

Military operating in these areas has to carry out cordon and search operations, invariably at night. People, more so women feel inconvenienced, and harassed.

From all accounts the committee was flooded with suggestions on the issue.  Working overtime the Committee has produced a voluminous report of over 500 pages.  The Report also touches on the subject of violence against women, more so rape by the military personnel working under the protection of Armed Forces Special Powers Act (AFSPA)  Possibly the recommendations relating to military’s alleged involvements in rape cases etc during its deployment under AFSPA, have come from certain NGOs and others from insurgency infested regions.

Though India has been victim of insurgencies from the very dawn of Independence, yet very few outside the military and certain central police services are adequately acquainted with the mature of this animal and how far spread and deep is the alienation and infact anti- India feelings amongst section of population in these regions, more so in certain parts of J and K. While the reasons for this animosity and antinational feeling are complex but in general relate to total neglect, lack of development, rampart corruption and poor governance, but it is the security forces who have to bear the brunt of this hostility from these elements, more so the vocal and the violent amongst them.

Military operating in these areas has to carry out cordon and search operations, invariably at night. People, more so women feel inconvenienced, and harassed. When hostility and anger against the security forces is already prevalent amongst the locals, these actions of security forces result in all manner of accusation against them.

If the protection of AFSPA was to be removed from allegations of offences against women, it will act as a great de-motivating factor and would inhibit military personnel to get involved in search operations where insurgents take shelter in villages.

Two incidents need recalling. Some years ago, a women named, Manorama, in Manipur was killed by the Assam Rifles personnel. It was alleged that she had been raped as well. This news received wide media coverage and there were agitations in Manipur. However the two autopsies carried by two separate group of doctors (both the autopsy reports are available with me ) ruled out rape and the nature of bullet injuries leading to her death corroborated the version of her attempt to escape when she was shot. She was a hard core terrorist and on arrest a radio transmitter etc was found with her.

The second incident relates to two women who drowned is some stream in Shopiyan in South Kashmir and security forces were accused of killing them. The first autopsy by the local doctors recorded rape of both the women. Some time later the bodies were exhumed and an independent set of doctors conducted a second autopsy and found no evidence of rape. Such then is the level to which even doctors can descend to tarnish the image of security forces. There are innumerable other such false allegations that are periodically leveled against the military deployed in counter  insurgency ( CI ) operations and such therefore, are the environments in which military has to operate.

If the protection of AFSPA was to be removed from allegations of offences against women, it will act as a great de-motivating factor and would inhibit military personnel to get involved in search operations where insurgents take shelter in villages. These search operations are the more essential components of CI operations. No military personnel would want to get involved in false civil cases and spend the next few years doing the rounds of civil courts where all the false evidence from the hostile local witnesses will be marshaled against them.

Any serious misconduct on the part of any person in any of these patrols adversely bears on the career prospects of a commanding officer and the concerned man is punished.

If that was not enough, the Verma Committee has recommended the addition of a sub clause ( f) to section 376,  where the commanding officer of  military personnel accused of rape or lesser offence against women  would be held, “guilty of the offence of breach of command responsibility.” where he, “failed to take necessary and reasonable measures within his or her power to prevent or repress the commission of the said offence.” In other words there would be criminal liability for commanding officer in the event any of his men are accused of offence against women and he would have no protection from AFSPA. This is both illogical and illegal. It is like holding juvenile’s father also guilty, while the rape is committed by the son!

Units deployed in CI operation, often send out a dozen or more patrols at any one time, more often at night, commanded by an NCO, JCO or an officer. Any serious misconduct on the part of any person in any of these patrols adversely bears on the career prospects of a commanding officer and the concerned man is punished. If in addition he is to be made party to the offence committed in some faraway place by one of his men, then one need not expect him to deliver! He will simply play safe and no one need expect any positive results in this fight against those who want to break-up this country! Commanding officers in the army are its cutting edge and the Verma Committee is out to blunt this edge!