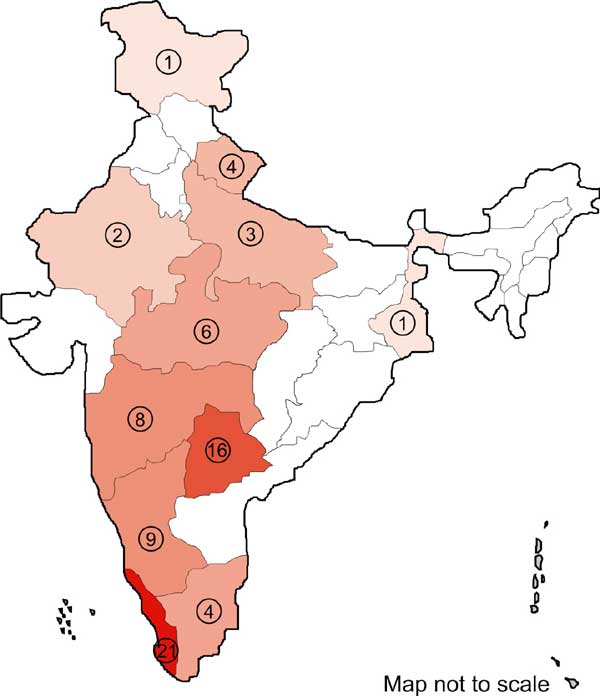 Of the 75 persons arrested, 21 were arrested from Kerala, 16 from Telangana, 9 from Karnataka, 8 from Maharashtra, 6 from Madhya Pradesh, 4 from Uttarakhand, 3 from Uttar Pradesh, 2 from Rajasthan, 4 from Tamil Nadu and one each from Jammu and Kashmir and West Bengal.

The incidence of jihadist radicalisation in India, across all its states, remains remarkably low when compared to West Asia, Africa and even Europe. Of the 177 ISIS sympathisers arrested by the National Investigation Agency (NIA) since 2014, Tamil Nadu, at 34, accounted for the largest number of those arrested, as of February 2020. 26 ISIS sympathisers were arrested from Maharashtra, 25 from Uttar Pradesh, 19 from Kerala, 17 from Telangana and 11 from Jammu and Kashmir.1

Tamil Nadu accounting for the high number of arrests may be the result of a specific campaign launched by the NIA in Coimbatore in 2019, wherein seven operatives were arrested for propagating ISIS ideology on social media with the intention of carrying out attacks both in Tamil Nadu and Kerala.2 Nevertheless, the NIA arrests have certainly highlighted pockets of growing jihadist radicalisation in Tamil Nadu.

The state witnessed sporadic incidents of violent extremism in the past, when groups like Al Umma carried out the infamous Coimbatore blasts in February 1998. The blasts were in response to communal riots in the city, the previous year. A total of 58 people were killed and over 200 injured in 12 bomb attacks in 11 places.

The blasts were a criminal conspiracy to target L.K. Advani, leader of the BJP who escaped unhurt during an election rally. S.A. Basha, the founder of Al Ummah, was among the more than 180 arrested and convicted by the courts. An accused, N.P. Noohu, evaded arrest for 20 years but was eventually arrested in Kerala in 2018.3

The early and late 2000s did not witness major extremist activities. However, with the advent of ISIS in India, there were instances of youth getting radicalised locally and through social media. In 2014, Tamil Nadu police arrested two persons in Ramnathapuram district for printing and selling ISIS T-shirts. Later, a photo on twitter was widely circulated showing 26 youths clad in black T-shirts with ISIS emblem posing in front of a mosque.4

In April 2015, Subahani Haja Moideen, a native of Tirunelveli district, went to Iraq to join ISIS. After undergoing religious and arms training, he was deployed with an ISIS military formation, Umar Ibnu Khatab Khatiba, headed by French national Abu Suleiman, who was later killed. Haja Moideen returned to India in September 2015 and attempted to procure explosive chemicals from Sivakasi, with the sole intention to carry out terrorist attacks in India.5 After his arrest in October 2016, he was found guilty by the NIA Special court and sentenced to life imprisonment.

According to the Intelligence Bureau (IB) dossier, the Al-Umma outfit, which subsequently changed its name to The Base Movement, carried out several blasts in Mallapuram court premises in Kerala and outside the BJP’s office in Malleshwaram in Bengaluru in 2016.6 Affiliated to Al Qaeda, this outfit also sent out threatening letters to the judiciary, prisons and senior government officials.

Tamilians constitute a sizeable section of the local populations in some of these countries. These people still have active links with the place of their origin. It is reported that there are almost 19 lakh Tamils in Malaysia, about 500,000 in Singapore and 75,000 in Indonesia.

This population is susceptible to the propaganda of various Islamist groups in the region, some of whom are affiliates of Al-Qaeda and ISIS, such as Jemaah Al-Islamiyah and Lashkar Jundullah (Indonesia), Abu Sayyaf group (Southern Philippines), and Kumpulan Mujahidin (Malaysia).

Analysts flag instances of Tamilians getting radicalised in South East Asian countries.7 In 2014, a Singaporean Tamil, Haja Fakrudden, travelled to Syria and joined ISIS. Another Singaporean, Gul Mohammed Mariakar, was deported to India for distributing jihadi literature and radicalising Usmal Ali, who joined ISIS in Syria. The ISIS’ media wing, Al Isabah, had in the past also released speeches of Abu Bakr Al-Baghdadi in the Tamil language.8

The Tamil-Muslim mistrust in Sri Lanka has spilled over into Tamil Nadu. About 72,000 Muslims from Sri Lanka’s Northern Province were forcibly expelled by the LTTE in October 1990.9 This is suspected to have created a sense of resentment among some sections of Tamil Nadu’s Muslims.10

The focus of study for jihadist indoctrination and violence by Indian security experts has largely been confined to the Af-Pak front or limited to the country’s western coastal states. Equal attention needs to be given to countering threats of radicalisation affecting India from Southeast Asia as well.

1.‘Arrest of people with links to Islamic State by NIA: TN tops list, Maharashtra and UP next’, The News Minute, February 18, 2020.

6.Vicky Nanjappa, ‘Base Movement: How did this Tamil Nadu based terror group get its name’, One India, November 29, 2016.

One thought on “Jihadist Radicalisation in Tamil Nadu”