is a strategic affairs and geopolitics analyst. He holds master’s degrees in economics from the University at Buffalo, The State University of New York, and MBA from Cass Business School, London. 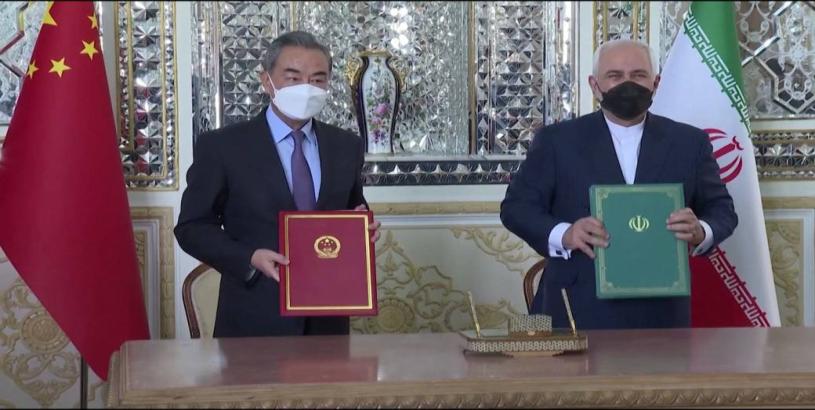 The Iran-China 25-Year Cooperation Programme, signed in March in Tehran, was paid little attention by the mainstream media. The vague and broad text of the leaked draft agreement from the year prior and the absence of attention made it look like every other agreement for cultural cooperation between two countries. However, more careful analysis showed that this act gave tremendous advantage to China to secure a large portion of its oil supply, hedge one of its main geopolitical risks – the Malacca Dilemma – by making CPEC cost-effective and make Chinese presence in the region even stronger considering the existing US foreign policy.

China’s oil thirst has long been one of its main strategic problems. Its importance for the growing economy is understandable and expected. However, oil is of even greater value to the military complex as it is needed for every machinery used to take over and control the ground. Because of this, every military campaign must solve two main problems – make sure that there is enough quantity and build the supply routes and procedures, which would deliver it.

Over the recent decades, China has put increasingly more focus on building a bigger, better and more capable military complex. It has stated also, through its General Secretary Xi Jinping and various party leaders that a conflict between their social system and those of the rest of the world, namely the West, is expected. It would be naïve for the world to turn a blind eye to their direct declarations.

The procurement for such a scenario cannot remain unresolved, especially in a centralized planned economy. Generally, China supplies its oil from the open market and transports it with tankers via the Malacca Strait. This route costs between $2 and $3, but in extreme cases when markets react to the implied insecurity, costs can rise to $10-14 levels. Such levels are unsustainable because they have a serious negative impact on the economy.

The oil availability is not the only problem they face. The Malacca Strait route is the optimal route because it saves thousands of nautical miles from the routes compared to the alternatives such as the Sundra Strait, Lombok and Makassar Straits and Ombai-Weitar Straits. Its main issue, however, is that it can be closed very easily in times of military conflict. Unfortunately, this is not much different for the other routes – the Sundra Strait is just 13 miles wide at its narrowest point, while the Lombok Strait is just 11.5, followed by the Makassar Strait, which is 400 nautical miles long, with widths ranging from 160 to 60 nautical miles.

Even tankers moving at the higher end of the speeds would require 24-26 hours to pass through it, leaving them extremely vulnerable for equipment, such as the Israeli-made highly mobile LORA rockets with a range of 400 km and CEP of 10 meters. The Ombar-Weiter Straits, on the other hand, because of their depths and proximity to Australia are going to be a likely place for submarine routes.

The cost of oil transport is not the only problem for China in an eventual military conflict – the ability to actually reach their ports is a clear and present danger. Currently, all the routes for the energy imports for China pass through the Malacca Strait – a long and narrow stretch between Indonesia and Malaysia. China’s implied risk in this situation is that, in case of international disagreement, this strait could easily be closed, a crisis event known as the “Malacca Dilemma”.

This scenario would put China’s economy and population in a serious situation without many options and they would be prone to influence. Bypassing would require rerouting through Java Sea or Timor Sea, which would increase prohibitive delivery times and, most importantly, risks for tankers’ capture and cargo loss.

When China invested in CPEC and influence in Pakistan they took care of the Malacca problem theoretically. Practically, the cost of transporting oil via CPEC remained high, largely due to the difficulties arising from the engineering complexity needed for the terrain conditions – the pipe must pass the highest mountains in the world and withstand formidable climate all year round. Because of this, CPEC could be viewed as possible Plan B and unsustainable solution. Until somebody agrees to pay the difference.

Understanding Iran and their situation resulting from the US-imposed sanctions from the stricter JCPOA (Joint Comprehensive Plan of Action) is important to explain how they became close allies with China. When the sanctions were imposed in late 2018, the local economy went into a downward spiral. At the same time, the Chinese oil purchases from them started to decrease from a four-year peak averaging $2 bn per month to below a quarter of that value – $0.2 to 0.5 bn and stayed at those levels. The data comes from the National Bureau of Statistics of China and Refinitiv.

The counterargument is that China compensated with unofficial purchases due to the US sanctions. It is true that such purchases were taking place and that the practice of the Iranian tankers to switch off their transponders to avoid detection has been a hot topic in news covering the oil industry. According to Refinitiv, quoted by also by Reuters, such purchases were negligible (total amounts not exceeding $0.5 bn) until November 2020. After that the portion of unofficial purchases – either through proxies such as Oman, Malaysia or through the “ghost” fleet of Iranian tankers – started increasing dramatically, reaching nearly 3.5 million tonnes in February 2021.

China’s foreign policy towards Iran in the next couple of years became even more carefully selected. By letting Iran suffer for two years by limiting their own purchases from them, they increased the instability in the already aching economy of the Islamic republic. It was the perfectly created moment to present the opportunity to finalize the deal for the partnership agreement between both sides. Such a strategy involved no risk for the Chinese economy as Iran’s crude represented just 9 percent from all oil imports during the peak in 2014, as per data by Statista, so after the intervention, the share must have dropped below 3 percent.

In this dire situation, China offered to help by purchasing their oil at heavy discounts. This would fund the infrastructure projects (which could very likely lead to increased economic and political pressure, similar to the developments in Pakistan, Sri Lanka and the rest of the partners) and to help with the IT sphere. Considering the implementation of the social grading system and the mass surveillance in China, it is safe to assume that they offered the autocratic government of Iran the way to exercise tighter control over its population as a way to counter Western influence. Even though specifics were not mentioned, such cooperation would be impossible without the use of hardware by Huawei and similar telecom/networking companies with proven links to the PLA.

Hedging in finance is the practice of reducing risks of adverse price movements of assets. It is similar to insurance – the interested party pays a premium to another party willing to take a specified risk. The situation with the China-Iran relationship is particularly interesting because China has the incentive to secure CPEC both physically and financially as well as to find a way to eliminate their biggest oil supply chain risk. Additional objectives include the extension of the multi-billion projects along the Belt and Road Initiative (BRI) and using that synergy to create dependency of an autocratic government, further helping them to tighten the grip over its population and give the PLA direct access to practically all networks in the country. In exchange for this, the government would give them a preferable price to their main export commodity.

Understanding the magnitude of the discount requires calculating the profitability in the worst possible scenarios. Even if transportation cost equal to the highest recorded peaks is used, it becomes clear that with that deal China would get the oil at their ports 8-12 percent cheaper than what it would cost in peacetime without the agreement. Additionally, a 20 percent discount at the current cost structure for extraction for Iran would require that Iran produces 35 percent more oil in order to end up with the same net income. This is, essentially, the money that funds the state budget and anything below that would be unsustainable as it would drain the budget in the mid to long term.

The outlook for the Iranian government is rather grim. The increased oil purchases were the sweetener of the deal and considering the share of the Iranian crude in the Chinese imports, they are far from vital. This means that the leadership in Beijing has very little motivation to keep the purchases at these high levels. Instead, it needs to keep on having Tehran pressed against the wall and dependent on this lifeline. This also means that the sanctions implemented by the White House might have a negative impact on Iran but they definitely strengthen China’s position in the region.

Additionally, those sanctions were done to avoid a situation where Iran becomes a military nuclear power. But if in the future China considers a scenario, where it is good for them to have WMDs located there, they could easily supply them. Against another level of dependency, of course.

The trade is nothing short of genius. China has made Iran pay for its own export in such way that it would be profitable to go through the most expensive route in the most adverse time for international trade (considering a military conflict, which closes the Malacca Strait). In the civilian world this is similar to a client receiving the monthly premium payments from the insurance company for his car insurance policy, rather than making them. It is an absurd situation, which gives all the benefits to one of the sides only.

The China-Iran partnership scenario is not a product of coincidental political and trade decisions over the years but rather a part of a carefully crafted policy. The strategists of the West are so far failing miserably against those in Beijing and need to fundamentally reconsider their relationships as time is running out.

Partnerships such as the QUAD have to be the focus of the foreign policy of Washington and the EU because the Communist Party of China is acting on its plan. The risks, which seemed almost like fiction a decade ago, are a present-day reality hanging like the Sword of Damocles over the democratic world.