Women in the Armed Forces: Misconceptions and Facts 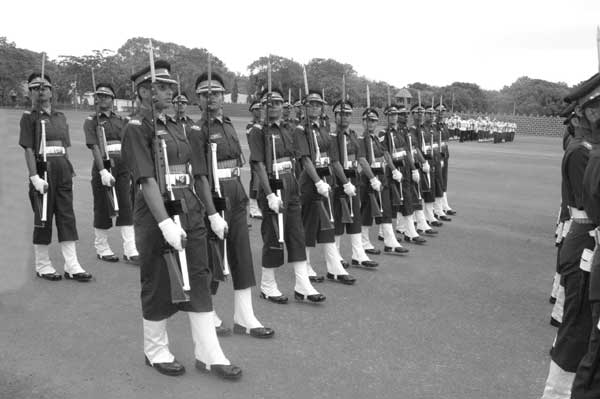 The recent debate about the entry of women officers in the armed forces has been highly ill- informed and subjective in nature. People have taken stands and expressed opinion without analysing the matter in its entirety. It is imprudent to consider it as an issue of equality of sexes or gender bias or even women’s liberation. It is also not a question of conquering the so-called ‘last male bastion’.

That would amount to trifling a matter that concerns the well-being and the war-potential of a nation’s armed forces. Armed forces have been constituted with the sole purpose of ensuring defence of the country and all policy decisions should be guided by this overriding factor. All matters concerning defence of the country have to be considered in a dispassionate manner.

No decision should be taken which even remotely affects the cohesiveness and efficiency of the military. Concern for equality of sexes or political expediency should not influence defence policies.

India has limited experience as regards induction of women in the armed forces. The first batch had joined in 1992. Therefore, our knowledge of the complexities and long-term effects of the issues involved is highly limited. On the other hand, women have been serving in the militaries of developed countries for a long time. These countries have acquired a deep understanding of all the issues involved.

The United States is considered a pioneer and a trend-setter as regards induction of women in the services. There are approximately 200,000 American women on active duty in the US armed forces. They constitute nearly 20 percent of its strength. Women are also participating in Iraq operations in large numbers, albeit in support functions as they are forbidden to be placed in direct ground combat with enemy. They, however, are assigned ‘combat support’ duties on voluntary basis.

Prior to November 1975, if women became pregnant, they were given the option to terminate pregnancy or seek discharge. A number of important steps were initiated during President Clinton’s time. Women were permitted to join as combat aircraft pilots and could also be assigned for prolonged duty on combat naval ships. The scope of combat-risk assignments for women was redefined to open additional appointments to them.

Though Israel has conscription for women (as well as men), a large number of them are exempted for various reasons. Women are generally not allotted active battle field duties. They serve in many technical and administrative posts to release men for active duty. Although they make excellent instructors as well, most women occupy lower and middle level appointments. Only a handful reach senior ranks.

A major enlargement of women’s role in the British armed forces took place in early 1990s. A number of new duties were assigned to them. Today, 71% of all jobs in the Navy, 67% in the Army and 96% in the Air Force are tenable by women. Women are primarily excluded from the duties which require battling enemy at close quarters.

For Canadian women it has been a long and slow struggle to be part of the armed forces. For over a hundred years, women were considered suitable only for nursing duties. However, things changed rapidly during the recent past and today women account for close to 13 percent of the total strength of the Canadian forces. Women are permitted in all corps and can rise upto senior decision-making levels.

Bulgaria has adopted a highly flexible model. As per the law, women in Bulgarian Army are appointed to professional military service in the Armed Forces on appointments proposed by the Chief of the General Staff. They have equal training standards and equal professional rights as men. Women constitute about 7 percent of the total force.

Though established in 1955, the Bundeswehr allowed women to join medical units and musical bands in 1975. It was only in 2001 that women won the right to join the Bundeswehr as soldiers. Today, there are nearly 12,000 German women in uniform on voluntary basis as compulsory military service for women is banned by law. Women constitute almost 6 percent of the total strength.

In the Australian Army women are still not allowed in the field/battle. In Russia, women generally serve in nursing, communications and logistic support functions. According to some estimates, their number is close to 95,000. Slovenia became an independent state in 1971 and inducted women in its armed forces soon after. Presently, women account for 18 percent of the total strength of the Slovenian Army.

Like all Islamic states, Pakistan does not permit women in the armed forces. It is feared that women would create distraction and cause disruption of internal order. There is also a great deal of concern for the safety of women from the organisational environment itself.

Women in all militaries are confronted with social, behavioural and psychological problems at all levels. According to many surveys carried out women are not fully satisfied with the ethos of military profession. Some of the major issues concerning women in all defence forces are discussed below.

This is one single concern that has defied solution so far – how to ensure safety and protect dignity of women in the forces. Almost all women view this as their major fear. The American and the British societies are highly emancipated and liberal with women having equal status in all fields. Yet, the level of sexual harassment of women in their forces is startling.

What hurts women most is the attitude of military officials who dismiss complaints as frivolous and due to over-sensitivities of women involved. Even serious accusations of sexual assault are many times treated in a perfunctory manner. Moreover, many officers tend to adopt an attitude of acquiescence by resorting to ‘boys will be boys’ apology. In the US, only two to three percent perpetrators are court-martialled and they are also let off with minimal punishment.

Acceptance of women in the military has not been smooth in any country. Every country has to contend with sceptics who consider it to be a counter productive programme. They tend to view it as a political gimmick to flaunt sexual equality, or, at best, a necessary liability.

Additionally, every country has to mould the attitude of its society at large and male soldiers in particular to enhance acceptability of women in the military.

Most women feel that their competence is not given due recognition. Seniors tend to be over-indulgent without valuing their views. They are generally marginalised and not involved in any major decision-making. They have to work twice as hard as men to prove their worth. Additionally, a woman is always under scrutiny for even minor slip-ups.

Many women complain that despite their technical qualifications, they are generally detailed for perceived women-like jobs. Either they get routine desk work or are asked to perform duties related to social minutiae.

Most women accepted the fact that their presence amongst males tends to make the environment ‘formal and stiff’. Mutual comfort level between men and women colleagues is low. Men miss their light hearted banter which is considered essential to release work tensions and promote group cohesion. They consider women to be intruding on their privacy.

The profession of arms is all about violence and brutality. To kill another human is not moral but soldiers are trained to kill. They tend to acquire a streak of raw ruthlessness and coarseness. This makes the environment highly non-conducive and rough for women.

Women, in general, are confused about the way they should conduct themselves. If they behave lady-like, their acceptance amongst male colleagues is low. On the other hand, their active participation in casual repartee carries the danger of their losing colleagues’ respect.

19 thoughts on “Women in the Armed Forces: Misconceptions and Facts”