In the evolution of US nuclear program, Submerged displacement rose from 3075 tons in Skipjack to 6926 tons in Los Angles to 9150 tons in Seawolf with plateau reached and now down to 7800 tons in Virginia class. A similar growth pattern can be seen in succeeding classes of other navies nuclear submarines as well. The increased displacement requires the corresponding increase in horse power, a bigger propulsion plant which in turn requires a bigger boat, and thus a self-sustaining cycle of growth is established.

In keeping with the available high strength steels (HLES, HY, AB series), and the desired diving depth, the diameter of SSN submarines has varied from 8 m to 10 m approximately. Submerged speeds of 30 to 35 knots have been achieved. 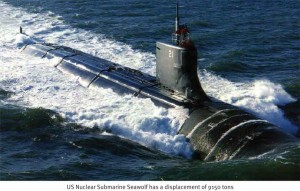 This is to suit the fitment of the ballistic missiles, to match the properties of existing available high strength steels, to match the desired diving depth, to keep the target strength minimal possible and to be economical and efficient.

Ballistic missiles will continue to be developed by many nations and for maritime deployment the envelop of SSBN Type nuclear submarines now under operation will have to be kept in mind. Any attempt to considerably increase the pressure hull diameter could be counter productive as one will be operating in areas of the unknown and make oneself an easy target for the enemy.

It was alleged that on March, 2010, in Yellow Sea, a torpedo from a conventional and very old submarine belonging to North Korea, sunk a modern ASW Corvette of the Republic of Korea Navy with a loss of 46 sailors. Let it be known that the conventional submarines with batteries & diesel engines will continue to pose threat and combat potential. The AIP systems will reach maturity as experience is gained in exploiting conventional submarines. More and more nations will acquire such submarines. These submarines have converged to optimum pressure hull diameter of around 6 m.

Very few nations possess nuclear powered submarines (SSN type). The cost and complexity of nuclear submarines are prohibitive. The realization on the initial cost, crew training, life cycle exploitation and support and decommissioning including safe reactor disposal etc, discouraged the Canadians to go for nuclear fleet. The number of nations who will adopt such costly and complex systems will be few and far between. However the combat potential of the nuclear submarines (SSN) will remain superior. The plateau has been reached in the size of SSN submarines and the optimum pressure hull diameter has converged to around 8 to 10 m.

Any future SSBN submarine will have to be designed within the proven envelope so as to remain in the realm of the known.

Fewer nations have designed and built SSBN type nuclear submarines. The size of such submarines is dictated by the size of the ballistic missiles. The search for technology to design and develop smaller size ballistic missiles for equivalent range is continuing. Presently the existing SSBN type nuclear submarines have optimum diameter of their hulls around 11 to 12 m. This has been possible within the available high strength steels and desired diving depths. The envelope of the recent modern SSBN type submarines has been evolved on full consideration of combat potential, target strength and other vital design and operational parameters. Any future SSBN submarine will have to be designed within the proven envelope so as to remain in the realm of the known. Any attempt to substantially further increase the diameter of the pressure hull to accommodate larger size ballistic missiles could lead to unforeseen problems.