It is estimated that about 500 submarines are in active service worldwide in about 30 nations. The significance and need for submarines is being realized by many more nations. Large navies operate large number of units, mainly nuclear. New nations looking for conventional submarines are Singapore, Thailand, Malaysia, Turkey, Portugal, Iran, Venezuela and Vietnam etc. Some nations are developing their first nuclear submarine. Conventional submarines are smaller in size compared to their nuclear counterparts. They are more agile, silent and best suited for operations in coastal and littoral waters where the majority of the world population is living. 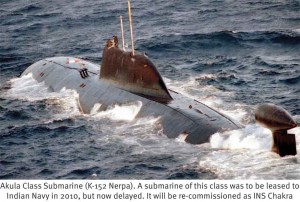 Submarines perform a wide range of important tasks in the present maritime environment. More than two thirds of the world surface is covered by seas; over which about 90 percent of trade circulates; it is here that submarines contribute significantly to the freedom of high seas to navigate freely and thus help the humanity. They can effectively counter asymmetric threats, piracy drug smuggling and other organized crime forms. Of course, as a primary role, submarines have extra-ordinary combat capability and they are difficult to trace and overcome.

Concealment and stealth are often signs of guilt especially in small children, and it is not surprising that in the early days of the submarine vessel there was a remarkable amount of moral indignation, perhaps more than any previous weapon of war. At the beginning of last century, Admiral Sir Arthur Wilson talked of submarine as “underhanded, damned un-English and he suggested that we treat all submarines as pirate ships in war time and hang all the crew.”

While the cost of a nuclear submarine may be three times that of a comparable non- nuclear vessel, however when training, crew salaries, life-cycle support and decommissioning costs including safe reactor disposal are added, the cost jumps to around ten times of a conventional submarine.

Diesel engine has been the source of submarine power. Its low weight, compact dimensions, simplicity, efficiency and non explosive fuel are best suited for surface propulsion, generation of electricity and charging of batteries. Although replaced by nuclear energy in large submarines by the 1950s, the diesel continues to be mainstay of medium and small submarines worldwide.

The prime disadvantage of the diesel powered submarines is the need to periodically surface and recharge the batteries used for under water propulsion. In World War-II the Germans designed the Snorkel – a hallow tube raised like a periscope to feed air to the engines. In addition to battery charging, the device also allows the diesel to propel the submarine underwater, conserving the battery charge. However, the snorkel mast creates significant drag and is noisy in operation. This can be heard by sensitive sonars many nautical miles away and snorkel is also detectable by radars. To counter these attributes, modern submarine commanders try to minimize their snorkelling to periods of 20 minutes or less. This is sufficient time to charge their batteries while not giving enemy enough time to detect and engage. During snorkel operations, the exhaust back pressure reduces the efficiency. Turbo charged diesels for submarines have been developed.

The need for longer submerged operations resulted in the development and evolution of Air Independent Propulsion (AIP) systems. There are three AIP solutions which are presently operational. Firstly the Royal Swedish Navy and the Japanese Maritime Defence Force have opted for Sterling Engines. They use liquid oxygen and traditional diesel fuel in an inert gaseous environment (helium). Secondly, the French MESMA Steam Turbine AIP has been fitted in last of the Agosta class for Pakistani Navy. In this solution, the turbines burn ethanol with liquid oxygen, requiring exhaust gases disposal that causes noise and bubbles and increases the IR indiscretion rate. Thirdly the Fuel Cells of German origin. These are fitted in German Type 212 A submarines for Germany and Italy. These are also being fitted in Type 214 export submarines. These are polymer electrolyte membrane (PEM) fuel cells. They require storing of potentially dangerous liquid oxygen and a safe metal hydride form of hydrogen. Reformer technology is under development and evolution whereby the hydrogen will be produced on board.

The advantage of nuclear power for submarine propulsion is complete independence from the surface and enormous high speed endurance. The penalty is complexity and costs of the system. Crew training and retention are vital to successful operations. While the cost of a nuclear submarine may be three times that of a comparable non- nuclear vessel, however when training, crew salaries, life-cycle support and decommissioning costs including safe reactor disposal are added, the cost jumps to around ten times of a conventional submarine.

The zone of lethality around a submarine is expanding; cost of underwater endurance is dropping; automation is replacing human expertise; and the number of vendors is certain to expand as third world nations begin indigenous submarine production with sophisticated technology.

The Pressurized Water Rectors (PWR) have reached maturity. A highly pressurized water loop is passed though the reactor to extract energy which is transferred via a heat exchanger to a secondary loop producing steam which spins a turbine. The steam is condensed and returns to the exchanger.

In a relatively swift development program, USA designed, developed and tested prototype reactors, and installed them on board two submarines. The atomic secrets were shared with the British. The Soviets almost paralleled the American lead. In one stroke, the diesel and battery systems were rendered obsolete for navies who could afford nuclear propulsion.

For lower tier navies, nuclear propulsion presents two significant problems. The first is cost. The second hurdle is political. Submarine reactors use weapon grade uranium, meaning any nation wishing to build a nuclear propulsion system must be conscious of world opinion and be a signatory to the Nuclear Non-proliferation Treaty (NPT).