“At the beginning of the last century, Admiral Sir Arthur Wilson described submarine as underhanded, damned un-English and he suggested that we treat all submarines as pirate ships in wartime and hang all the crew.”

For lower tier navies, nuclear propulsion presents two significant problems. The first is cost. The second hurdle is political. Submarine reactors use weapon grade uranium, meaning any nation wishing to build a nuclear propulsion system must be conscious of world opinion and be a signatory to the Nuclear Non-proliferation Treaty (NPT).

Submarine after all, is the original “stealth technology” for all who go to war under the sea. For the first time in history it played an important role during World War-I. Subsequently, it showed potentials during World War-II and this substantially made the road map to the way wars at sea are conducted. At the turn of century, all submarines used batteries for submerged power. For combined duties of surface propulsion and battery charging, diesel engine is more efficient and was adopted universally. The diameter of the pressure hull of such conventional submarines converged to around 6 m. However even the improved diesels required atmospheric oxygen requiring the boat to either surface or run a snorkel. As such these were prone to easy detection by the enemy radars, infrared detectors and chemical sniffers for exhausts. This stripped the protective cover of darkness from the submarine. It led to nuclear power for propulsion as ultimate solution to true submarine. The pressurized water reactors became the power source for submarines. The commissioning of American USS “Nautilus” on September 30th, 1954 opened a new era.

Compared to other naval platforms, submarines are inexpensive, require few personnel and can hold major maritime assets at risk. With cruise missiles they also can attack targets ashore with precision.

The size of the submarine is driven by the size and weight of the power plant which can reduce the volume available for payload, survivability features and even stealth. In the 50 years of evolution, the diameter of the pressure hull of nuclear submarines increased from 8m to 10.9m and it was realized that a plateau has been reached and the recent boats have been designed with pressure hull diameter of around 9m. It can be said that the diameter of such nuclear submarines of SSN type varies between 8m to 10m. The ballistic missiles pushed the size of the submarines further. For ballistic missiles of range 12000 km of western origin, the diameter of the pressure hull required is around 11 to 12 m for diving depth of around 400m and using hull material as HLES-100 (France), HY-100 (USA, UK) and AB-3 (Russia).

Submarines have been getting bigger and bigger, and which is not good specially from the active acoustic point of view. The primary reason for growth is propulsion technology and size of ballistic missiles.

The bigger size offers higher target strength to the enemy. Within the available technology, materials (HLES, HY-100 or AB-3) and diving depths of around 400m, it is not advisable to substantially increase the pressure hull diameter beyond 12m. This article reviews the growing size of submarines, emerging technologies and recommends not to go beyond the plateau reached in pressure hull diameter for safety, security and operational reasons.

Submarine is the most cost effective warship. In the peculiar calculus of conflict where costs and benefits are weighed, the existence of a submarine fleet requires an opponent to balance his force equation carefully. Stealth and lethality are factors to be ignored at great peril. Compared to other naval platforms, submarines are inexpensive, require few personnel and can hold major maritime assets at risk. With cruise missiles they also can attack targets ashore with precision. 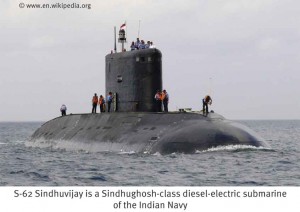 The submarine force can be configured in three distinct areas; first for conventional submarines, second for nuclear powered attack submarines (SSN) and third for ballistic missile submarines (SSBN). While the current generation of combat submarines – both conventional & nuclear – are increasingly difficult to detect and attack, many emerging technologies stand to make submarines of the future quieter and even more deadly. The zone of lethality around a submarine is expanding; cost of underwater endurance is dropping; automation is replacing human expertise; and the number of vendors is certain to expand as third world nations begin indigenous submarine production with sophisticated technology.