“¦ few sprinkling of check posts along the coast and the coastal police stations set up a little far away from coast are the only visible, physical police presence in the entire stretch from the coast to Mumbai. 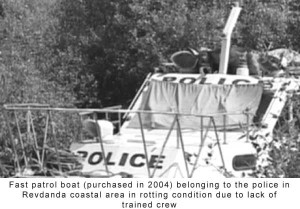 On paper the Customs outposts in the fishing centres and its relatively bigger presence in ports should combine together to generate crucial coastal security inputs. But on ground the reality is that while this system has the potential for generating intelligence on activities in the high seas, this system is just isn’t operational and real security enforcement is completely absent. The Customs does not watch fishing docks. Most Customs outposts are abandoned and the staff is perpetually on casual leave. Barring having their paperwork in order the department does very little else.