Revamping Coastal Security Apparatus: Considering the inadequate coastal security infrastructure along the vast and porous Indian coastline the issues relating to registration of boats, transponders and bio-metric identity cards for fishermen, port workers and others associated with maritime activities assume tremendous urgency. With maritime terrorism actually becoming a reality, security agencies have observed that there are several fishing harbours in India that are operational within port limits. Clearly these fishing harbours could be misused by maritime terrorists and, therefore, a clear plan of action must be enunciated to relocate such fishing harbours, taking due cognizance of the livelihood issues of the fishermen and ensuring that they are not adversely affected. 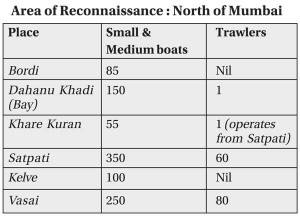 While these are issues that the Indian government is keen to address in the most effective and time bound manner, much will be achieved if a ‘mission mode’ work ethic is infused to ensure that the Indian national security establishment is in a position to deter the most sophisticated maritime terrorist attack of the future.

A hallmark ground survey carried out by this author and his team of investigators three years ago is still relevant because nothing has changed on the ground. In addition to the status quo, what the rough survey does reveal is the massive task at hand when it comes to revamping coastal security. The survey randomly selected certain fishing harbours along the Konkan coast in Western India.

Most of these places are small centres of fishing, barring Dahanu Khadi, Satpati, and Vasai where trawlers are available. Of these Dhanu Khadi is the smallest, rural place, where people are a little more simplistic, and not as suspicious and street smart as the people in Vasai and Satpati.

Other places like Bordi, Khare Kuran, Kelve, do not have trawlers, they have smaller, diesel engine boats, which use more traditional floating net methods of catching fish. Their boats are not that powerful, but these also go outside Indian territorial waters. 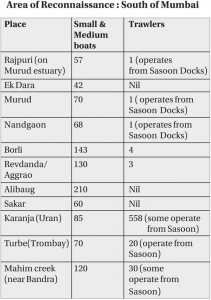 With well armed Somali pirates wreaking havoc on shipping lanes from the Indian Ocean to the Gulf of Aden between Somalia and Yemen, Al Qaeda and its associate terror groups could easily outsource maritime terrorism to mercenary pirate groups. 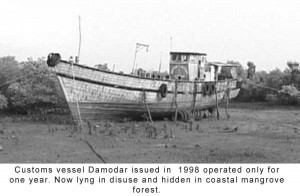 – The Rashtriya Chemicals and Fertilisers (RCF)

One thought on “Gaps in Maritime Security-II”