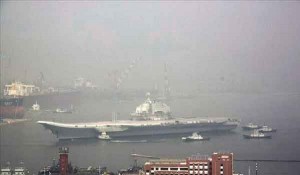 The issue of the Chinese aircraft carrier, the former Russian Varyag, has re-emerged in the last few days. Both the United States and Japan have asked China to “˜explain its perceived need for the aircraft carrier. As a strategist, the questions warrant an answer along the lines of “well, duh.” American and Japanese demands (apart from calls for greater transparency) look naive and as a poor attempt at playing to their domestic audiences in making China look unreasonable in pursuing a naval air capability.

One of the main drivers, if not the most critical, of Chinese naval growth is its concerns over energy security. China is a net importer of oil and gas; these strategic commodities mostly come in to China via sea from the Middle East. Thats a long shipping lane which could be targeted by numerous adversaries if they wished to. India is sat astride Chinas very fragile energy import route; India already has an aircraft carrier (the INS Viraat) and plans on three more in the decades ahead. The INS Vikramaditya, the former Soviet ship Gorshkov, is being rebuilt by Russia and two indigenously built aircraft carriers are on the drawing board. This is significant for China as, in a moment of crisis or war, India will be able to threaten Chinas supply of energy from the Middle East (not to mention all other seaborne trade). China is already pursuing whats called the “˜string of pearls strategy in the Indian Ocean. It has set up or funded a string of maritime bases along shipping routes in the Indian Ocean, including the Pakistani port of Gwadar. Of course, the United States Navy (USN) is able to threaten Chinese sea lines of communication much more effectively given its superiority in conventional military qualitative and quantitative terms. The USN has eleven aircraft carriers and the necessary support networks. 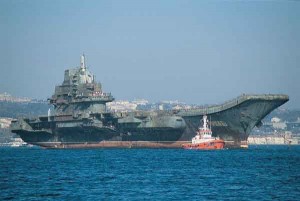 The second driver of Chinas acquisition of naval air capabilities is to attain a credible measure of strength to reinforce its maritime claims. Beijing claims most of the South China Sea as its territorial waters, where it would have the right to exploit the mineral and energy wealth of the sea, and particularly the Spratly Islands. I would wager that Vietnam is the most concerned with Chinese naval growth, as it stands to lose the most from a belligerent China. Vietnam would lose significant amounts of resources from the South China Sea if China was to have its claims realised. Other littoral states in the South China Sea are rightly concerned with the growth in Chinese naval capabilities.