How could air power have helped in this situation? For this let’s go over a hypothetical situation wherein adequate airpower assets and a suitable command-control set up was available for the forces when this incident occurred. In time frame, let’s see how the situation would have developed. After having received an initial intelligence input of an imminent attack on 12 Dec 05 the civil administration could have alerted the crisis management group at the state capital, Patna.

The state in turn could have called for air assets, initially in the form of UAVs to step up surveillance in the area along with medium lift helicopters to transport specialized anti-insurgency para military forces into the area. All this could have been achieved on 12 Nov itself with a UAV control station in operation by the afternoon on Day 1 with UAVs operating from Patna airfield. Initial sorties could have been flown by the UAVs on 12th evening. These sorties would have established topographic details, likely entry points into the town, and identified vantage points for security forces in the expected area of operation. The morning of 13th Nov could have seen the identification and airlift of specialized para-military forces with limited night fighting capabilities into Patna. The forces would have been briefed and kept on a 30 minutes ‘hot standby’.

By the evening of 13th Nov, UAVs with live streaming capability via data links could have noticed Naxalite build up in the vicinity of Jehanabad. This would have been the trigger for insertion of troops around last light.   The naxalite attack could have easily been repulsed with ambush positions cutting off escape routes. By midnight, majority of the insurgents would have either been killed or captured, inflicting a significant blow on the movement. A few escaping militants could have possibly been tracked to their hideouts opening the possibility of further strikes by para-military forces. This would have been the culmination of a successful anti-naxal operation in which air power could have been employed with telling effect in non-kinetic roles.

Since the Entebbe operation in which Israeli commandoes were stealthily airlifted into Entebbe airfield, to the recent low scale slithering operations conducted by the Indian NSG during the Mumbai terror attacks and the Israeli strikes against Hamas leadership in Gaza, airpower has been employed against terrorists in all possible roles with mixed results. The impediments in employing offensive air power in anti-terrorist operations are many and a clear understanding of these are important for various tiers of state machinery that include bureaucracy, police, paramilitary forces and a wide cross-section of the military itself. 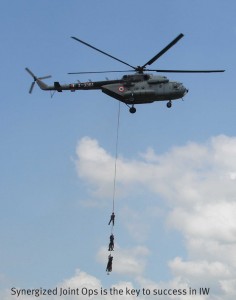 Use of offensive airpower against terrorists in sparsely populated or under-developed terrain is a viable proposition with the US led coalition forces employing UCAVs, attack helicopters and fixed wing fighter aircraft in Afghanistan against the Taliban. Use of offensive or kinetic air power in urban terrain is a completely different ball game that is dictated purely by political constraints and compulsions coupled with humanitarian issues that relate to collateral damage.

The Israelis in Lebanon and Gaza, the US led coalition in Iraq and the Sri Lankan Airforce against the LTTE have used offensive airpower with varying degrees of success in urban terrain, but faced severe strictures from the international community for excessive collateral damage and loss to civilian life.

However, use of offensive airpower does have have a significant deterrence value and coercive effect on terrorist leadership and nations have to take a tough call on this based on national security imperatives.

For the time being however, nation states like India prefer to employ the non-kinetic or supporting roles of air power in anti-terrorist or even anti-insurgency operations that mainly include surveillance by UAVs, logistics and communication support by transport aircraft and helicopters and insertion of Special Forces into operations in hostile environment.

Employment of airpower in Irregular warfare is an inescapable requirement that needs to be looked at with renewed focus in the light of the recent Mumbai terror attacks, the increasing boldness of the Naxalites and the continued proxy war in J&K. There has to be a general realization that the lower end of the spectrum of warfare can be significantly influenced by intelligent and judicious use of air power in its various roles, both offensive and supporting.