The stakes have recently been raised with the firing by the Naxalites on an IAF Mi-8 helicopter on 14 Nov 08 in the state of Chattisgarh3, resulting in the death of a flight gunner and significant damage to the helicopter . The event is significant in the sense that the escalation has been initiated by non-state actors just as the LTTE did during the ongoing Elam War-4 that is approaching a critical stage. The firing on the IAF Mi-8 helicopter indicates that the naxalite movement is willing to raise the stakes in its ongoing insurgency against the Union of India. This incident re-opens the debate on the use of offensive air power against a non-state actor within the confines of one’s own geographical boundaries. 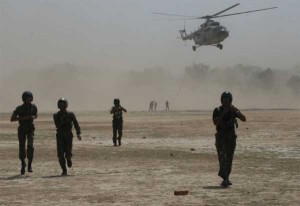 Numerous encounters in J&K between the security forces and terrorists have led to needless loss of the lives of security personnel because of the understandable caution with which they have gone about the encounters, particularly in relation to collateral damage and escalation control. Without getting to specific encounters in J&K, a few of which have had the potential to employ air power offensively with armed helicopters, excessive caution and restraint have resulted in the death of officers and men. These could have probably been avoided if armed helicopters were employed after ascertaining the low probability of collateral damage.

Typical examples of these have been the storming of Bakarwal huts4 by the Indian Army in the higher reaches of J&K where no civilian population lives for miles. The question we need to ask is that are we portraying the image of being a ‘soft state’ in our prosecution of war against the non-state actor? Are we also displaying a marked inability to synergize our capabilities against elements that threaten the legitimacy of the state?

If non-kinetic air power has to be used effectively and safely in a hostile environment within our own territory, it is essential that all elements of the state apparatus must support the mission from conception to execution. Without misinterpreting any facts, the IAF needs to be a trifle alarmed that the Naxals are now targeting them and initiate suitable measures to avoid recurrence of such incidents.

It is important to study a typical Naxal attack and correlate it to a situation wherein air power assets were readily available for use in various roles, both supporting and offensive.5 On the night of 13 Nov 2005, a group of approximately one thousand naxalites converged onto the town of Jehanabad in Bihar, approximately 30 kms from the capital city of Patna. Their target was the district jail, which housed about 250 inmates including many of their leaders. Their timing was perfect, since most of the police force was deployed elsewhere in the state for election duties.

Numerous encounters in J&K had the potential to employ air power offensively with armed helicopters, excessive caution and restraint have resulted in the death of officers and men. These could have been avoided if armed helicopters were employed.

The police had about a day’s advance intelligence input of an imminent attack and had taken minimal precautionary measures as they underestimated their opponents. However, the sheer magnitude of attack surprised everyone and the prepared defences were rendered totally inadequate. After building up the force on the outskirts of the town, the naxalites launched a three-pronged simultaneous attack on the district jail, police station and the police lines.

Within an hour of the gun battle, the Naxalites were able to overrun the defences and free all the inmates of the jail. The attack left 15 policeman dead, numerous injured, besides the loss of weapons from the armoury at the police station. By daybreak, the naxalites had fled and melted into the nearby forests.