Finally, if technology is exploited to the hilt can Air Power be exploited in a manner that the perpetrator of Sub Conventional Warfare be dragged to the negotiating table by causing unacceptable attrition and exerting exhausting pressure the way the Sri Lankan Air force is exerting on the LTTE? If so, has airpower not once again acted as an instrument of coercion, though this time not against established nations but against non state actors, terrorists and insurgents.

The stakes have recently been raised with the firing by the Naxalites on an IAF Mi-8 helicopter on 14 Nov 08 in the state of Chattisgarh, resulting in the death of a flight gunner and significant damage to the helicopter . The event is significant in the sense that the escalation has been initiated by non-state actors.

In the modern era of warfare the Israelis have been pioneers in the use of air and space assets to prosecute a campaign against non-state actors like the Hamas and Hezbollah without needlessly or prematurely committing ground forces. Though their strategy has met with limited success and evoked widespread international condemnation, it has certainly opened new vistas for the employment of air power at the lower end of the spectrum of conflict.

While a number of eminent academics and theorists like William Lind have unravelled the confusion that exists at the lower end of the spectrum of warfare, it is important to try and put it in simpler terms that is easily understandable by everyone. This warfare typically includes skirmishes between two adversaries prior to actual full scale conflict, insurgencies and proxy wars like the ones being faced by India in the north-eastern parts of the country and in J&K, wars of liberation based on ethnic divides as being waged by the Kurds and other non-state actors like the LTTE, and blatant acts of terrorism that are guided by religious extremism like the 9/11 attacks on the Twin Towers or the Mumbai attacks of 26/11.

After years of trying to fingerprint this genre of warfare, theorists have zeroed in on two terms that typecast these categories of waging conflict, viz. Sub-Conventional Warfare and Irregular Warfare. Both these terms reflect the flexibility and unpredictability with which these wars are fought, as also the difficulty for regular armed forces in formulating tactics and strategies to fight these battles.

Choosing the right weapons and training regular forces to think and train in a manner that contradicts age old tenets of war-fighting are other dilemmas that merit constant attention. Having tried to understand some typical facets of Sub-Conventional or Irregular warfare, it is now time to focus on the Naxalite movement that has been troubling India since the early sixties and now threatens her very fabric. Dissecting the movement is not within the purview of this article and it is assumed that the reader has a basic grasp of what Naxalism is and how it has assumed such a threatening posture.

One of the reasons why naxalites2 have attacked the Indian para-military forces with impunity and great success is because they realize that domestic political compulsions have ensured that the armed forces are kept away from fighting an insurgency that is rapidly spreading in the hinterland of India. 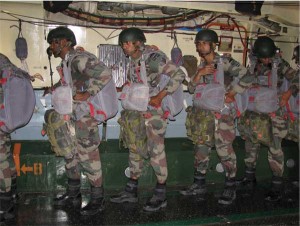 The armed forces in general have been chary of joining the fight against the naxals because they are already overstretched in J&K and the North-East. The IAF too is heavily committed in the same areas and does not have the resources to significantly influence operations against the naxalites. Another interesting aspect that has seldom been understood is the demographic nature of Naxalism vis-à-vis other insurgencies worldwide. In most other countries insurgencies have grown on geographical peripheries where insurgents have aspirations of independence and have had support from ethnically similar regions in neighbouring countries.

Typical examples are the Kurdish rebellion in Iraq & Turkey, the ethnic strife in the Balkans, the Chechen rebellion and to some extent, the Islamic unrest in the border province of Sinkiang in South-Eastern China.

In India too, the insurgency in the North East and the proxy war in J&K have received tacit support from meddlesome and ethnically similar neighbours. In such situations, it is not difficult to rationalize and motivate regular troops and airmen to fight the insurgencies as they visibly threaten national security. The Naxalite movement however is an insurgency that is spreading in the hinterland, with the same regions being represented in the armed forces. Whether this would be an impediment when it comes to having to join the fight against Naxalism is something that needs to be kept in mind by the govt and policy makers.