“This is another type of war, new in its intensity, ancient in its origin — war by guerrillas, subversives, insurgents, terrorists, war by ambush instead of by combat; by infiltration, instead of aggression, seeking victory by eroding and exhausting the enemy instead of engaging him. It is a form of warfare uniquely adapted to what has been strangely called “wars of liberation,” to undermine the efforts of new and poor countries to maintain the freedom that they have finally achieved. It preys on economic unrest and ethnic conflicts. It requires in those situations where we must counter it … a whole new kind of strategy, a wholly different kind of force, and therefore a new and wholly different kind of military training.”1

India faces challenges like never before when it comes to tackling the lower end of the spectrum of warfare. The ongoing conflict with the Naxalites and the terror attacks in Mumbai are but grim reminders of this new reality. Preparing for the ‘big battle’ has always been the raison’ d’être of most militaries the world over. Even the militaries of USA and Israel, which have talked about this genre of warfare for decades, realized its all pervasive influence only after being rudely tested in Iraq and Lebanon.

The period after the Second World War saw economically progressive nations with large and powerful militaries develop an ability to effectively use military power as a potent tool of coercion in furtherance of state policy by engaging in coercive diplomacy. Before going further, there is a preliminary need to establish a linkage between the coercive capability of large powers and the emergence of Sub-Conventional or Irregular Warfare as a means of combating this capability.

During the Cold War, coercion became akin to a game with the US and the USSR testing their coercive capabilities across the globe using divergent tactics with different tools, but having similar objectives, viz expansion of influence and interests.   Deterrence and coercion worked side by side and were complementary to one another.

Terrorists, insurgents and freedom fighters found remarkably new ways of fighting established states and combating the coercive capabilities of established nations or even coalitions with what is now commonly known as asymmetric warfare.

Thus, if one were to look across the spectrum of conflict — while powerful nations like the US, Russia, India and even smaller nations like Sri Lanka and Israel attempted to avoid ‘full scale’ war fighting methods to resolve conflicts and attempted to evolve coercive conflict resolution methods, their opponents excelled at what has emerged in recent times as techniques of ‘Sub Conventional and Irregular Warfare’ that eat away gradually at the fabric of the state.

Therefore, one can deduce that sub-conventional warfare has emerged as an effective counter to a larger nation’s ability to coerce, and the tools used are in stark contrast to the tools of conventional coercion, be it diplomatic or military.

If one were to look closely at the capabilities of both blocs during the cold war, all the main weapons of coercion used the medium of air, whether it was the Strategic Bomber or the ICBM. Some of the searching questions that need to be asked relate to the query that if air power played a pivotal role in coercion during that era, can it assume an equally important role in tackling today’s biggest threat to established and civilized society, viz Sub Conventional Warfare? 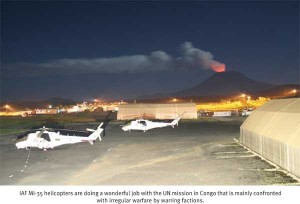 The starting point would be to briefly examine the spectrum of conflict with specific reference to the dwindling possibility of conventional and limited wars, and arrive at the most probable scenarios for the future.

The inability of smaller countries, entities and non-state actors to counter coercion with open force, and fight conventional wars have led to the emergence of war-fighting concepts with esoteric names like Sub-Conventional, Irregular, and Assymetric Warfare. Were these logical fallout or was it precipitated by history? In the post Cold War era, and at places even during the Cold War, failure of coercion invariably led to gradually escalated use of force.

Classic examples were the Vietnam conflict, the Indian peace keeping and enforcement operations in Sri Lanka, the Kargil Operation, and the Lebanon war of 2006. Air Power formed the primary tool for escalation and at places like Kargil and probably Sri Lanka, the much needed catalyst for conflict resolution too.

Some important questions that need to be asked and answered are — How successful has the application of Air Power been so far in combating Sub Conventional Warfare? What have been the restraining factors and limitations of Air Power in small wars? Has technology offered new perspectives and possibilities on the use of air power in small wars, sub conventional conflicts and irregular warfare?