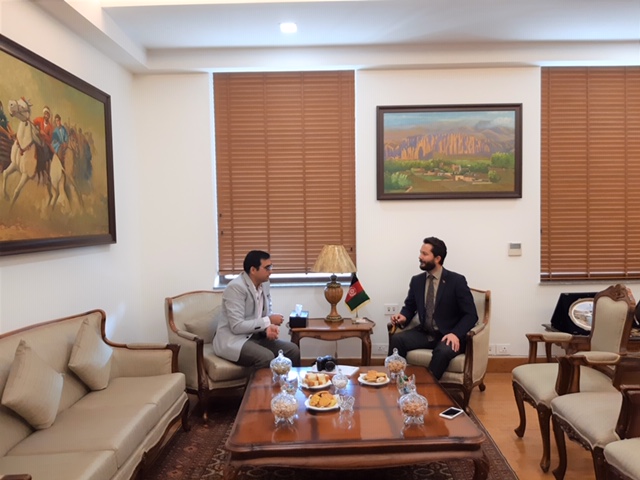 Mr Tahir Qadiry is Afghanistan’s envoy to India (Charge d’Affaires). In an exclusive interview to Manish Rai, Editor of Viewsaround and a geo-political analyst spoke about various issues concerning Afghanistan. Following is the detailed interview of Mr Qadiry conducted at Afghanistan embassy in New Delhi.

Question 1- Do you think recent escalation between United States and Iran will be counterproductive for Afghanistan peace process?

Mr Qadiry- For Afghanistan peace process our government is looking for regional consensus as we believe we can achieve enduring peace only when we have consensus and agreement from all neighbouring countries. Of course, any tension effect the overall security situation in the region.  However, when it comes to Afghan peace process it is Afghan led, owned and control which people of Afghanistan and government is controlling. But still we are in contact with all our partners and stakeholders in Afghanistan to get their support.

Question 2- As Taliban gaining ground US eager to move out. How you see future of stability in the country?

Mr Qadiry- Since 2014 Afghan Security Forces are leading the fight against numerous insurgent groups. We are at forefront in fighting international terrorism. Obviously with support of our international partners especially USA. In last year Afghanistan Presidential elections Afghan forces did very well in providing security despite the grave threat from Taliban. We have very strong and capable security forces. Today’s Afghanistan is not that of 2001-02 we are strong enough and united to defend our land. Of course, it is good to have support from international community.

Question 3- Now as Taliban indulging in talks and negotiations with Ambassador Khalilzad. Do you think Taliban has changed and it is not the old Taliban of 1990’s?

Mr Qadiry- What we have always said that Afghanistan has changed but Taliban has not changed. The reasons why I say Afghanistan has changed for this I’ll give you one example last year we had our elections in which people who were born right after 9/11 for the first time went to polling stations to vote, a democratic practice that we couldn’t imagine under the Taliban.Unfortunately, Taliban has not changed as they still carrying out attacks on civilians targets including – Schools, Mosques and Markets. That’s why Afghanistan Government is asking Taliban that if they want any political settlement, they have to shunviolence. If Taliban wants to integrate with today’s modern Afghanistan which is very different compared to 2001-02, they have to change themselves.

Question 4- Afghan forces last year were able to provide effective security cover for Presidential elections without any foreign support. Do you think Afghan forces are capable enough to secure the country in case of total US pull out?

Mr Qadiry- I will refer to what I said earlier. That we have very dedicated, discipled and strong Afghan National Security Forces (ANSF). They are fighting at multiple fronts against different insurgent groups. They are at frontline and conducting both offensive and defensive operations. Before joining foreignservice, I was working independently for media. I used to attend media conferences of NATO in which they always praised Afghan forces in what they doing. I remember in each conference they would say that Afghan forces are very professional and dedicated. We require financial support for our forces but our forces are doing all operations by themselves. In Afghanistan battlefield is very complicated as you don’t know who your enemy is and how many enemies you have. So, you require lot of skills to fight in Afghanistan theatre and our forces poses all required skills and standing on their feet. I think they will be fine.

Question 5- Recently Afghanistan saw emergence of Islamic State which poses a great threat. What you think how non-Taliban armed groups should be tackled?

Mr Qadiry- Our government recently announced that IS has been eradicated from the Eastern Afghanistan where they used to have their bulk presence. Hundreds of IS fighters along with their families have surrendered to Afghan government. IS largely have been eliminated from the country. Yes, they may have small presence in some parts of the country.

Question 6- How you see role of India in peace talks?

Mr Qadiry- India is the strongest regional ally of Afghanistan both countries share very rich history and culture. We have traditional and historic relationship which carried on over very long period of time. Our relationship is not of today or yesterday it is historic in nature. We signed our first strategic partnership agreement with India in 2011. India is doing well in construction and reconstruction work in Afghanistan. We also trying to learn and copy democratic values and good governance from India. India has been all weather friend of Afghanistan and has always stood by the people of Afghanistan. In last year elections India stood with Afghan nation even many other countries and some Afghan politicians were saying that there should not be any elections. In regard to peace process India is supporting the stand of Afghan government. Even the term for peace process that it should be Afghan controlled came from India. This was used first time by Indians it clearly illustrates that India always endorsed stand of Afghan govt. Still India can do more as it is a very powerful country it can use its different platforms to lobby for Afghanistan.

Question 7- Afghanistan has opened a new consulate in Hyderabad. How this new consulate will contribute in Indo-Afghan relations?

Mr Qadiry- For long we were waiting for opening of consulate in South of India for promoting medical tourism, supporting Afghan students as we have 3,000 Afghan students studying in southern states of India. This consulate will help Afghanistan to open to South of India. We are also hoping to connect and establish a sister city relationship by linking Hyderabad with Jalalabad. We aim to extend our air trade corridor to Hyderabad also. 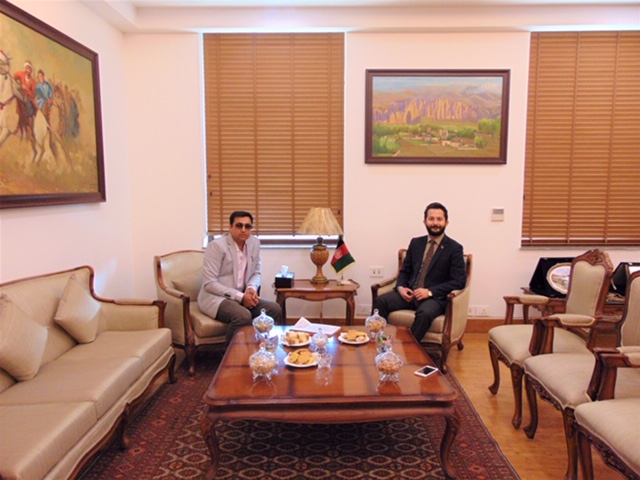