It is a law of nature that all civilizations must finally decay and be replaced; Muslims were no exception. By the early 1700s, Muslims were bored and fatigued with their 500 years of continuous rule. There were no new challenges emerging; the Muslim zest for warfare and domination was all but lost. The great Mughal Empire started disintegrating after the death of Aurengzeb in 1707 AD.

That was an ideal opportunity for the Hindus to re-establish their rule over this woeful land. Hinduism would have got back a modicum of respectability; but that was not to be. In the early 1700s, there were three Hindu powers, which could have undertaken the task.

Perhaps for the first time in world history, a private company raised a private army, which started inflicting defeats on sovereign powers of Bharat —  both Muslim and Hindu.

With Hindus unwilling and unready to take over Delhi, a new religion (Christianity) and a new race from the distant land of Europe filed their claim to rule this ancient holy Hindu land. Even the color of the skin of these new people was different; and so were their mores and manners.

The Muslim invaders had come from lands that were 2 to 3 weeks’ horse-ride away, with lots of resting places and looting opportunities on the way. In an emergency, the Muslims could always hope to get back, or get reinforcements. Muhammad Ghauri did exactly that after his defeat in 1191 AD. The Europeans came from a land that was nearly 6 to 8 months’ ship-ride away, with no resting places or looting opportunities on the way. We may recall that in those days, there were only sail ships (no steam ships), no Suez Canal, no established sea-lanes, and no navigational aids worth the name. The ships had to depend on favorable winds and were often blown off course. There were no telephones, not even telegraphic facilities. In an emergency, it would take 6 to 8 months to send a message home, and even longer to get any succor. If they lost in the battle, they did not have the option to back home. In short, the odds against the European adventurers were the most formidable that can be imagined. Once on the sea, the Europeans had to depend solely on their wit and grit, determination and raw courage. The sheer scale of their adventurous spirit and audacity of their enterprise is breath taking. If they finally succeeded in taking over Bharat, they had earned it.

To start with, the British rid Bharat of the Muslim rule of 600 years. It is doubtful if the Hindus would been have ever able to do that on their own.

A number of European countries, medium to small, threw their hats in the ring. Of these, the three more important ones were Portugal (a tiny country), France and England. The navies of each of these countries had orders to sink the ships of the other two. The Portuguese were the first to come, but also the first to withdraw, leaving the field to the French and the British. Besides fighting the Indians, these two countries fought each other in India, on the high seas and back home in Europe. In addition, to show of raw courage in the battlefield, these powers showed exceptional diplomatic skills, in pitting one Indian power against another. But for these exceptional qualities there no way ‘so few could have overcome so many, in such a short time’.

On landing in India, the Europeans were met with the dust and heat of India. England is freezing cold and almost dustless. Another welcome for the incoming Europeans was in the form of tropical diseases like malaria, tuberculosis, cholera and the like. Contracting any of these diseases meant almost certain death, as those days, medicines were most rudimentary, and antibiotics unheard of. Also, contrary to popular belief, by the time the Europeans came, not many riches were left in India. Muslims had been looting the country for 600 years. Even the decorated doors of temples had been carted away. Ahmed Shah Abdali had cleaned the till to the bottom. We may recall that in one raid alone, Abdali is reported to have carried the loot from Delhi on some 28,000 carts, camels and horses.

Finally, the British won the race; they were no sultans, or sovereign rulers. They were a bunch of traders, who had formed a private company to trade; and not to invade. On landing in India, they found Bharat ready and almost willing for a military take-over. Perhaps for the first time in world history, a private company raised a private army, which started inflicting defeats on sovereign powers of Bharat — both Muslim and Hindu.

Around 1750 AD, a lad of 17 years, Robert Clive was sent to India as a sort of civilian clerk. His ship was blown off to Brazil and he landed in India penniless, after about one year. However, this civilian clerk underwent a metamorphosis, to emerge as a military genius. No Indian General, Muslim or Hindu, could stand before him. In 1757, in the famous Battle of Plassey, Clive inflicted a crushing defeat on the redoubtable Siraj-ul-Daula, the ruler of Bengal. As per one version, Clive had only about 3000 troops — 900 British, 2100 Indians sepoys, against some 55,000 troops of Siraj. Reportedly, Clive suffered only around 40 casualties out of which some 10 were British. Sounds unbelievable! Clive, in addition to being a military genius, was a corrupt person; he amassed massive wealth.

The British went on to record an equally brilliant victory in the Battle of Buxar in 1764 AD. There they defeated the combined forces of Bengal, Awadh and the Mughal King Shah Alam II. Thereafter, there was no looking back. They went on to inflict defeat after defeat on various Indian rulers — both Muslim and Hindus. These included the Marathas, the Sikhs, Tipu Sultan of Mysore, the Nizam of Hyderabad. The Rajputs did not care to put up much of a challenge. The British could achieve these spectacular results by their superior skills. They outmaneuvered the Indians in all fields — military, diplomatic and manipulative. By 1800, the British (Company) power was well established in India. Following the 1857 ‘Rising’, India was taken under the direct and formal control of the British Crown.

Earlier, it used to be a Muslim General, who would outmaneuver the Hindus in the battlefield. Now, a single Muslim Jinnah out-foxed a galaxy of Hindu leaders on the round table; Jinnah walked away with his Pakistan.

Slavery is the greatest curse for humanity, and it needs to be avoided — always and under all circumstances. During the freedom struggle, the Indians had to suffer a lot of British atrocities in the form of loss of liberty, livelihood, limb and life. We may recall the indiscriminate hangings after the 1857 Rising, the Jallianwala Bagh massacre and other such episodes. We salute the Indian martyrs and stalwarts who suffered at the hands of the British, and pay them our respectful homage. With these caveats, we dare say that the British rule in India was not a curse, which slavery normally is. The British gave to India many things that were of long lasting value.

To start with, the British rid Bharat of the Muslim rule of 600 years. It is doubtful if the Hindus would been have ever able to do that on their own. The Marathas were a dominant power in the 18th century, with a sort of suzerainty over Delhi. However, in keeping with the defensive Hindu mindset, they did not establish themselves on the Delhi throne. Even in the 1857 Rising, a tottering old Mughal king was put on the Delhi throne.

After the death of Aurangzeb in 1707 AD, India was split into innumerable states. Their number may have been near one thousand. It was the British, who united them all and created one India; this included the so-called 600 odd states that were under the effective control of the British. The British made Tibet a buffer state between India and China. They also tried to define Indian borders by the McMahon line and the Durand Line (now on Pakistan); that showed their vision. Then, there were the railways, which helped strengthen the idea of one India. The two areas presently suffering insurgency are the North East and Kashmir, where the railways did not reach. 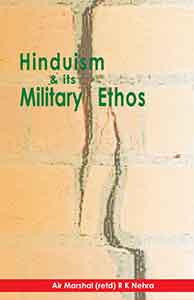 The present Indian judicial and legal system and the administrative structure are British gifts to India. Then, there is the English language. Many of the stalwarts of the Indian freedom struggle like Nehru and Gandhi were the product of the British educational and value systems. The formidable Indian Armed Forces are another great product of the British. It was the British who brought to light some of cultural jewels of Bharat. These included the Indus Valley Civilization, the Ajanta/Ellora caves and even the Khajuraho temples. It was due to the British and their English language that the Vedas and Upanishads could become part of the world heritage. The British gave India a sense of history, which was traditionally lacking in the Hindus.

In early 1900s, Indians started their freedom struggle under the leadership of Mahatma Gandhi, Jawaharlal Nehru and Sardar Patel. Jinnah jumped into the fray to demand his pound of flesh in the form of Pakistan. Earlier, it used to be a Muslim General, who would outmaneuver the Hindus in the battlefield. Now, a single Muslim Jinnah out-foxed a galaxy of Hindu leaders on the round table; Jinnah walked away with his Pakistan. This ancient holy land of the Hindus was partitioned, perhaps for all times to come.

6 thoughts on “A British Private Company, raised a Private Army to conquer India!”