Events before the Attack

“After Pakistan proclaimed a National Emergency on 23 November, three missile boats were placed at Okha to carry out patrols. They gained very valuable experience of the area and the waters around and in the vicinity of Okha and also proved the facilities provided at the advance base there.

“As the Fleet would be operating not far from Karachi, a demarcating line was established which neither the ships of the Fleet nor the missile boats would cross. This would prevent any unfortunate incidents of own forces engaging each other.

The Pakistani authorities had warned all merchant ships bound for Karachi not to approach the harbour to within 75 miles between sunset and dawn.

“The Pakistani authorities had warned all merchant ships bound for Karachi not to approach the harbour to within 75 miles between sunset and dawn. This meant that any unit picked up on the radar within that distance was most likely to be a Pakistani naval vessel on patrol.

“The Karachi strike group consisted of two Petyas and four missile boats armed with four missiles each. One of the four boats was to remain on patrol off Dwarka in order to provide cover for the force on its way back. The Petyas were intended to provide communication and control and, with their better radar, give indication of suitable targets. In the event of an emergency, they could take a boat in tow and, if necessary give fuel.

“After arriving at a certain point south of Karachi, the Task Group Commander in the Petya was to release the missile boats to proceed at maximum speed towards Karachi; the Squadron Commander embarked in one of the boats would allocate targets and the boats thereafter would act independently keeping in touch with the Squadron Commander. The Petyas would follow at a slower speed, but stay not too far away from the rendezvous. Naval Headquarters and Headquarters Western Naval Command were to listen in on Pakistani wireless circuits and pass the relevant intelligence to the force. 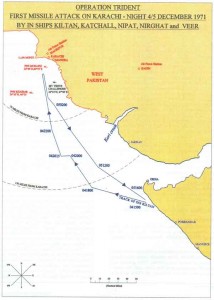 “The plan had been to strike Karachi with a composite force on the very day that Pakistan carried out their first act of war. The Pakistanis attacked our airfields on the evening of 3 December 1971. Since it was not possible for our forces to attack Karachi the same evening, it was decided to launch the operation on the following day, i.e. the night 4/5 December.”

On the afternoon of 4 December, when the Strike Group was on its way to Karachi, FOCINCWEST sent a signal directing the Petyas and the missile boats to remain in company throughout.

The Task Group’s approach to Karachi was by and large uneventful. Despite some confusion, contacts detected en route were eventually analysed as undeserving of missile attack.

The contact to the northwest was engaged by missile boat NIRGHAT with two missiles. The target sank. It was later learnt that this was the Pakistan Navy destroyer KHAIBAR.

The contact to the northeast was engaged by missile boat NIPAT with two missiles. The target sank. It was learnt later that this was a merchant ship MV VENUS CHALLENGER.

The plan had been to strike Karachi with a composite force on the very day that Pakistan carried out their first act of war.

A third contact appeared to the North. It was engaged by missile boat VEER with one missile. The target sank. It was learnt later that this was the Pakistan Navy coastal minesweeper MUHAFIZ.

At this stage of the attack, when there were no contacts on radar, what should have happened was that all ships of the Task Group should have continued to close Karachi and, from the predetermined point promulgated by KILTAN, each missile boat should have fired one more missile at Karachi. This did not happen. Missile boat NIRGHAT mistook anti aircraft tracer shells and reported sighting aircraft. Fear of Pakistani air attack sharply increased. KILTAN’s accurate anti aircraft radar also mistook as aircraft the shells being fired from Karachi’s gun defences. It took some time for this confusion to clear.

Meanwhile K 25, the Commander of the missile boats, told missile boat NIPAT, in which he was embarked, to fire one of his two remaining missiles towards Karachi which NIPAT did. K 25 then issued the order for the boats to withdraw. Due to a fade out in communications, the Commander of the Task Group in KILTAN did not receive this withdrawal signal. He continued to close Karachi. When he arrived at the predetermined point, 20 miles south of Karachi he found himself all alone. Except for missile boat VEER, everybody else had turned round and was headed back towards Saurashtra at full speed. Due to a machinery problem, VEER had reduced speed to effect repairs.

When KILTAN turned round to head for home, VEER mistook KILTAN for a Pakistani warship and almost fired a missile at her. Fortunately communications and identity were reestablished and a catastrophe averted.

The target sank. It was later learnt that this was the Pakistan Navy destroyer KHAIBAR.

In due course, ships of the Task Group arrived on the Saurashtra Coast in ones and twos, refuelled on 5 December and arrived in Bombay on 6 December.

Events after the Attack

In Bombay, there was elation at the Task Group’s unprecedented achievement. At the professional level however, there was disquiet as to the reasons for not bombarding the Karachi installations with missiles. The Commander of the Task Group, Cdr (later Commodore) KP Gopal Rao was the Commanding Officer of the Petya KILTAN. The Commander of the Missile Boat Squadron (K 25) was Cdr (later Commodore) BB Yadav, embarked in missile boat NIPAT. FOCINCWEST received differing accounts from them. He directed both of them to put up an agreed report. They were not able to agree. The disagreement hinged on who was in command of the attack, particularly after all contacts had been sunk.

The COKILTAN’s stand was that K 25 was not authorised to order withdrawal. This was his prerogative as the Commander of the Task Group in KILTAN.

In an article in the Indian Defence Review of July 1990, Commodore Gopal Rao has described the sequence of events as he saw it. In it he stated:

“The rendezvous with KATCHALL and missile boats NIRGHAT and VEER was effected off Dwarka on the afternoon of 4 December 1971. Clarifications on the points raised by the Commanding Officers of the ships were given and the Task Group sailed from Dwarka PM 4 December to carry out Operation Trident. KILTAN and KA TCHALL were in the vanguard and the three missile boats stationed slightly in the rear. This formation was- maintained throughout the approach towards Karachi. At about 1800 hrs, 4 December 1971, when we were 150 miles from Karachi, course was altered northward to head towards Karachi.

At the professional level however, there was disquiet as to the reasons for not bombarding the Karachi installations with missiles.

“Three incidents of interest occurred during our approach towards Karachi. The first one was at about 1810 hrs on 4 December 1971, when KILTAN’s radar picked up a surface contact on a northwesterly bearing at a range of 45 miles. This contact, which was classified as a warship was doing a speed of 24 knots and steering a north westerly course, heading towards Cape Monze, situated to the west of Karachi, oblivious of our presence. The reason for the presence of this Pak warship in this area was to become clear only after the war. The second incident occurred at about 1945 hrs when KILTAN’s radar picked up a reconnaissance aircraft and I immediately altered the course of the Task Group westwards and succeeded in misleading the aircraft. The reconnaissance aircraft’s message to Karachi “Firm Contact, Course 270. Speed 20″ was intercepted by our shore authorities. At about 1900 hrs, when my radar scan was clear of aircraft echoes, I altered course northward again.

The third incident occurred at about 2000 hrs, when a surface contact was picked up on KlLTAN’s radar on a northeasterly bearing at a range of 25 miles. This contact then increased its speed to 24 knots and started steering an intercepting course. I verified from my Navigation and Gunnery radars that this was not a spurious echo. When the contact closed to 15 miles, I altered course of my Group to westward and did not permit the contact to close upon us further. After a while, the contact reduced its speed considerably and its radar echo started becoming smaller and smaller until it finally disappeared. At about 2014 hrs I altered course again northward and increased the speed of the formation to 28 knots. Because of the westerly alteration of courses on two occasions the Pak warship heading northwest towards Cape Monze increased its distance and the contact was lost on our radar. She was picked up again only at about 2300 hrs, 4 December 1971 at a range of 40 miles when she was nearing Cape Monze.

“The Task Group in formation was heading northward at high speed and was about 70 miles to the south of Karachi at 2150 hrs. Soon after, KIILTAN detected a target to the northwest at a range of 45 miles, which was classified as a warship on patrol. A second target was detected to the northeast, at a range of 42 miles and classified as a large unidentified ship, proceeding in shallower waters at 16 knots towards Karachi. Pakistan had issued a warning that no merchant ships should approach closer than 75 miles from the Pakistan coast at night. All the ships of the Task Group were ordered to switch on their radars and acquire the targets. After the missile boats confirmed that they had acquired the targets, I designated the enemy warship to the northwest to NIRGHAT and the unidentified large ship to the northeast to NIPAT at about 2200 hrs and ordered them to proceed for the attacks. Both the missile boats hauled out of the formation and proceeded at higher speeds towards their respective targets.

The COKILTANs stand was that K 25 was not authorised to order withdrawal.

“The Pak destroyer PNS KHAIBER was patrolling the southwest approaches to Karachi and only at about 2215 hrs was she able to appreciate that an enemy force was approaching Karachi. She then altered course and increased speed to intercept us, the rate of closing was about 60 knots. At about 2240 hrs when KHAIBER was within range, NIRGHAT fired her first missile. KHAIBER opened fire with her close range anti-aircraft guns but did not succeed in preventing the missile from hitting her. Her boiler om was hit and her speed came down to eight knots.

7 thoughts on “1971 War: The First Missile Attack on Karachi”