The dramatic airlift—to Srinagar on 27 October 1947 was the turning point of the operations to defend Kashmir Valley. Since the theatre of operations was undeveloped for road communications reliance had to be placed increasingly on air supply as the Army developed its thrust towards the interior. It goes to IAF’s credit that its transport aircraft flew along hitherto uncharted routes over the world’s highest mountain ranges and, operating from make-shift airfields, at times under hostile fire, sustained the Army operations till the ceasefire. Many an awkward situation was averted by timely reinforcements of men and material and a great number of lives were saved by timely evacuation, under the most hazardous flying conditions of weather, hostile action, indifferent airfield surfaces, and night navigation and landing. 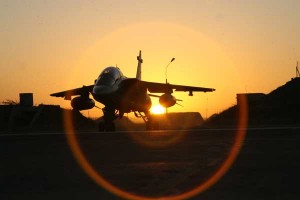 Tempest aircraft flown in narrow and wooded valleys rocketed and bombed the raiders out of their hideouts with telling effect. So apt had IAF become in innovation that it attacked the Kohala bridge along the Rawalpindi-Srinagar highway with bombs rolled out of the open doors of a Dakota by the bare feet of the ejection crew. The transport element had to grow in these operations and pilots were converted while they were on operational flying, on-the-job training as it were. The performance of the units operating in Jammu and Kashmir was praiseworthy and won undying admiration from soldiers and senior officers alike.The credit for this must go to Meher Singh, who personally led every difficult mission. His briefing of pilots was the briefest—just “Follow me.” He led and they literally followed. He was the first pilot to land a Dakota at Leh airfield, hurriedly cleared for the occasion by removing boulders. The memory of Baba Meher Singh and his daring exploits will endure as long as IAF flies.

Meantime, efforts were afoot to create a virtually new IAF, with its own training, administrative, maintenance, operational establishments, and organisation. An inventory of World War II surpluses, discards and even salvage was made to evaluate the equipment resources in hand. This reorganisation was assigned to three outstanding RAF officers. Air Marshal Sir Thomas Emhirst was the first Air Chief after partition. He was succeeded by Air Marshal Sir R. Ivelaw-Chapman, and finally Air Marshal Sir Eric Gibbs.The first enunciation of the force level of IAF came from Sardar Baldev Singh, Defence Minister in 1949. Addressing Parliament, he announced the Government’s intention to create a balanced force of 20 squadrons by 1960. This seemed to be based on the earlier War Office assessment of imperial requirements. It is likely that the British chiefs might have given this advice keeping in view the Commonwealth requirements in the overall context of imperial strategy. It certainly did not appear that the Government had given serious thought to the longterm potential threat in view of our poor relations with Pakistan, or to the fiscal resources required to maintain an air arm of this size. The war surpluses from British stocks however helped immediately.

In the period 1947-53 about 100 British-built Spitfires and Tempests (33 constituting India’s share and 67 purchased from surplus stocks) were acquired from the RAF storage at Karachi. A notable addition to the IAF inventory was the American-built Liberator bomber. Till then, a single-engined combat aircraft filled the role of both fighter and bomber. The salvaging of Liberators from aircraft the US Air Force and RAF had abandoned on the forward airfields in Assam and elsewhere enabled several heavy bombers and reconnaissance units to be raised. Although these bombers were never used operationally, they gave much needed experience to Indian pilots and ground technicians in handling and serving big four-engined aircraft. They also carried out maritime reconnaissance till as late as 1960.

A beginning was thus made. Wapiti, an biplane, was the main aircraft of the Royal Air Force Squadron in India and was extensively employed in operations against tribesmen in the Northwest Frontier.

The transport wing was also expanded about threefold, but it still continued to fly the war-tried workhorse, the Dakota. VIP flight duties were also taken over by IAF with the acquisition of De Havilland Devon light transport aircraft. Simultaneously with this expansion and re-equipping process, training facilities were established to replace those which had gone to Pakistan. A repair and maintenance organisation was also set up to cope with the needs of the fast expanding Air Force. Consistent with Government policy, Indianisation was also going ahead. By March 1954 most of the shortages were made up by direct recruitment of qualified civilians, commissioning deserving NCOs and retaining a few Britons in key posts. At that time there were however no more than nine British officers and 54 civilians still with IAF.

Air Marshal Subroto Mukerjee, the seniormost serving officer, was appointed the first Indian Chief of Air Staff on 1 April 1954. He had established good rapport with Nehru, and this helped him to get timely allocation of financial resources to set IAF on the second, but vital, phase of development which lasted till Mukerjee’s sudden death in late 1960. Nehru was keen on developing a “visible military force” in the region as part of his political diplomacy. IAF fitted this role and received the preferential treatment of an indulgent parent. Two jet streaks seen over Delhi one morning, presumed to be from Chinese aircraft operating from Tibetan bases, hastened the ushering in of the jet age in IAF.

British Vampires were initially purchased to replace the inventory of fighter squadrons on the understanding that the parent company would provide the engines while airframes would be assembled with some indigenous components by Hindustan Aircraft Limited (HAL). The sudden threat of the British Government in 1952 to cut off the supply of Vampire engines made India think of an alternative source, and as a result orders were placed for the French Ouragan jet fighter bomber, renamed Toofani, as an interim measure while negotiations were initiated to manufacture, as a long-term measure, the British Folland Gnat light fighter under licence as a next generation fighter.

By 1956 IAF had nearly reached its targeted strength of 20 squadrons, but the bulk of the aircraft inventory was obsolescent. Replacement and re-equipment would perhaps have proceeded in a leisurely fashion but for the start of US aid to Pakistan the same year. Pakistan acquired the F-86 Sabrejet and F-104 Starfighter. To maintain an edge over Pakistan both in strength and quality of aircraft, 1957-58 saw the completion of major re-equipment and expansion plans. The choice of aircraft was primarily based on air staff requirements, the willingness of the manufacturing country to release its product and weapons system, and the availability of foreign exchange or ease in making financial arrangements on business terms without political strings.