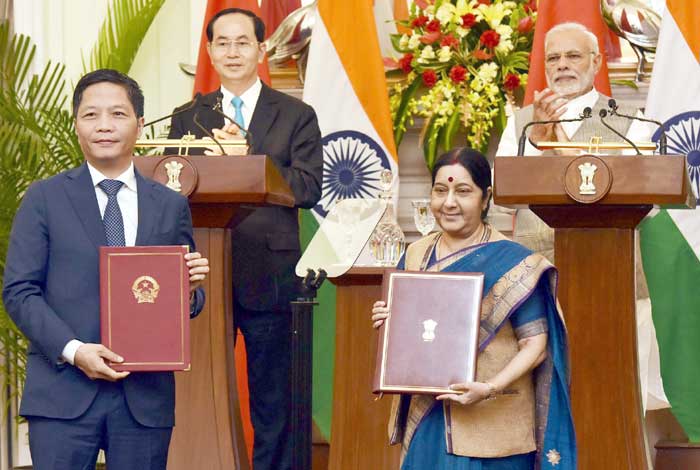 In the post-Cold War period, China played an active role in South East Asia. Vietnam was under the Han Chinese ruler from 111 B.C. to 938 A.D. The Chinese provided essential support to Vietnam in the war against France as also against the United States. However, prior to the unification of Vietnam, the Chinese PLA captured the Paracel islands in 1974. Further Vietnam invaded the Chinese supported Khmer Rouge Government in January 1978 overthrowing the dictatorial rulers and this hurt the Chinese. On 17 February 1979 China launched an offensive on the Northern borders of Vietnam to teach the Vietnamese a lesson. The conflict lasted up to 06 March 1979 with no major gains being made by the Chinese. It is pertinent to note that India’s External Affairs Minister Shri Atal Bihari Vajpayee (our late Prime Minister) was visiting China when the attack was launched and had to terminate his visit prematurely. Hereafter China started bilateral cooperation with all ASEAN countries and provided aid to Vietnam while improving trade relations.

China agreed to resolve border issues with Vietnam by peaceful means. This resulted in resolution of the land border and the maritime border in the Gulf of Tonkin. However, the dispute over the Paracel and Spratly islands remained unresolved. In 1988, there were major clashes between the Chinese and Vietnamese Navies resulting in heavy casualties. Both sides thereafter established troops in parts of these islands as protective forces. In 1995 China occupied Mischief Reef claimed by the Philippines. In May 2011 the Chinese cut the cable of a Vietnamese oil exploration ship resulting in further tension between these two countries. India has been allotted oil blocks by Vietnam in the South China Sea. China has cautioned India on the subject but India has taken a bold step in stating that commercial activity will continue in international waters.

The new Government under president Xi Jin Ping has become more assertive and moved a mobile oil rig in the South China Sea on May 2014. In the meantime, Philippines took the issue to the Permanent Court of Arbitration in The Hague. On 12 July 2016, the PCA promulgated the Award. PCA considered the implications of China’s nine dash line and whether China has historic rights to resources in the South China Sea beyond the limits of maritime zones that it is entitled in consonance with UNCLOS. The Tribunal examined the historical record to determine whether China actually had historic rights to resources in the South China Sea, prior to the entry of UNCLOS. The Tribunal considered that prior to the Convention, the waters of the South China Sea, beyond the territorial limits were legally part of the high seas in which vessels from any nation could navigate and fish. Accordingly, China had no exclusive rights historically in the high seas. The Tribunal concluded that the nine-dash line did not give China exclusive rights in the high seas. China was perturbed with the Award and refused to comply with the PCA Ruling. India and Vietnam have both stated they respect UNCLOS and freedom of navigation in the High Seas. Observing China’s uncompromising attitude, US, India and all affected parties are observing the situation and would act if required patiently.[2]

Based on the need to tackle China both countries have been moving closer in their strategic relationship. The first Memorandum of Understanding was signed in 1994, a formal Defence Protocol in 2000 and Strategic Partnership in 2007. This has been upgraded to the Comprehensive Strategic Partnership in 2016. Vietnam has this sort of relationship with only Russia and China.

Numerous visits have taken place by top leaders of both countries. The latest has been by our President Ram Nath Kovind from 18 to 20 November 2018 and the Chief of Army Staff from 22 to 25 November 2018. During Prime Minister’s visit in 2016, 12 Agreements were signed which included Outer Space, UN Peace Keeping, avoidance of double taxation, Cyber Security, Information Technology, information on white shipping and contract for procurement of Offshore Patrol Vessels.[3]

With regards to the defence issue, there is no doubt that both countries respect the current Permanent Court of Arbitration ruling and they agree to the freedom of navigation on the high seas. To further strengthen our defence relationship India has extended a $ 500 million dollar Line of Credit for purchase of defence equipment. The equipment to be procured is not known but there is a high probability it could be frigates, submarines or the BrahMos missile. Vietnam has signed a contract with L&T for the purchase of four Offshore Patrol Vessels. In addition, India has given a grant of $ 5 million for the construction of an Army Software Park at the Tele Communications University in Nha Trang. Further to assist surveillance there will be cooperation in downloading images from Outer Space to provide real-time picture of activities in Vietnam’s Area of Interest.

Economic issues formed an important aspect of the visit. Enhancing bilateral economic engagement is a strategic objective. Both countries would do their utmost to increase the bilateral trade to $ 15 billion by 2020. This would need immense efforts but can be achieved if both countries enhance their business interactions and diversify their range of commercial activities. Further, there must be increased two-way investment especially by private investors of both countries. Prime Minister Modi especially sought contractual facilitation of Tata’s Soc Tranh 1320 MW plant at the earliest. Both countries would do their best to enhance exploration of oil and gas in the new blocks allotted for exploration. Connectivity between both the countries needs to be optimised. There is a need for direct nonstop flights, dedicated shipping and land connectivity to be optimised. This would automatically strengthen economic relations between the two countries.

Ever since we became strategic partners there has been an annual Strategic Defence Dialogue with the Indian Defence Secretary representing India. Considering the intensity of our relations, the upgradation of these talks to the Ministerial levels would be necessary.

Cam Ranh Bay has been often described as one of the jewels of Vietnam. The long protective seaward peninsula, natural inner and outer harbours form what many believe to be possibly the best deep water port seaport facility in the entire world. There is also an Air Force base with excellent runways for state of the art aircraft. The usage of these facilities by the Indian Navy and Indian Air Force would help us to strengthen our strategic partnership and enable us to undertake actions to protect our assets in the South China Sea. The area is being quietly considered between the two countries.[4]

Based on Vietnam’s requirements India could provide Dornier surveillance aircrafts, mini Unmanned Aerial Vehicles (UAVs), upgraded T-72 tanks and indigenously manufactured Artillery equipment once the same has proved trials and few of our old ships of the Indian Navy. Vietnam is currently procuring Offshore Patrol Vessels with our line of credit offered.  Vietnam is impressed with our Missile development and is keen to purchase our Supersonic Cruise Missile BrahMos which could be used on land and sea. The issue merits serious consideration as there are no objections from the foreign joint developer. Vietnam is also keen that opportunity is accorded to train their scientists in missile technology and running of nuclear reactors.

View the professional training of our Armed Forces and looks forward to assist in training in the following areas:-

The Vietnamese President as also the General Secretary of the Communist Party and their Prime Minister was frank in strengthening defence relations with India. Vietnam would like to cooperate in the field of training as also gaining knowledge in the field of rocketry and missiles. It would be in our interest to cultivate Vietnam and cooperate in strategic aspects to dissuade China from undertaking a misadventure.

Vietnam is looking for cooperation in areas of outer space with India. They have already launched two satellites and are planning their own navigation satellites. Cooperation with India would be mutually beneficial to both countries.  India is also setting up receiving stations to enable Vietnam to receive downloads from our Reconnaissance Satellites on the areas bound by the South China Sea.

Vietnam is the strongest pillar of our Act East Policy. They are looking forward to Indian assistance in the field of military technology which we must provide at all cost. China provides weapons to all our neighbours and would accept our friendship with Vietnam. India must leverage the maximum from this strategic partnership.