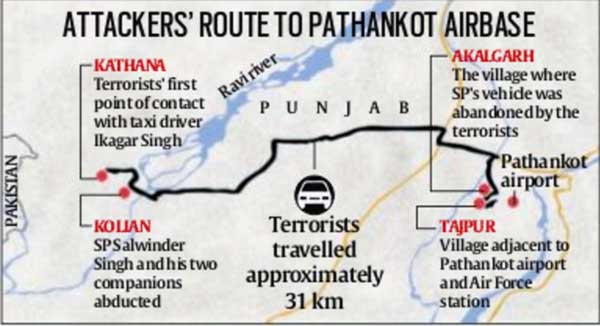 So the inevitable happened again but on expected lines. We woke up on Saturday, to the news of a terror attack on the Pathankot Air Base in Punjab.

On expected lines, because there are people and organizations in Pakistan who would never like the relationship to grow, otherwise their relevance will be neutralized.

We need to understand that the real power in Pakistan is not with the civil democratic government under Nawaz Sharif but with the powerful Military under Rahil Sharif.

We need to place this terror attack in correct perspective. Should we blame Pakistan? Well the answer should be negative because such terror groups are actually not under their state control.

Today, Pakistan witnesses many more terror attack than us. Every week there is some or the other terror incident in Pak. Had these terror group under their control, I am sure they would not have been damaging their own interest.

We need to understand that the real power in Pakistan is not with the civil democratic government under Nawaz Sharif but with the powerful Military under Rahil Sharif.

Can Nawaz Sharif do anything meaningful? Well this question itself is ridiculous, because the poor guy was overthrown twice by Military. Is Nawaz that novice in politics that he takes panga with powerful military the third time? It’s for all of you to judge.

I presume that the civil government in Pakistan be it Nawaz or Zardari, always wanted to have a friendly relation with India but it is their military who is averse to such moves. It is an open secret that Pak military treat these terror groups as their asset to neutralize India’s Conventional capability.

There can be no meaningful talk, until there is Pak Army on board. Talking to somebody like civil government of Nawaz and Zardari’s, who has no control on the situation is just an eyewash and is of little use.

I remember the terror attack in Mumbai. Then Zardari government, readily agreed to send the ISI chief to India to provide all possible support without consulting the military. Soon they got a kick from military and the outcome is known to all of us. There was no ISI chiefs visit and Zardari government had to put their foot in their own mouth.

Every time there is talk between two nations, we talk to the civil government knowing fully well that they absolutely can do nothing.

We have a policy of engagement with the democratic government only, which is actually doing more harm than good. Because of this ill-conceived policy, we earlier lost out in Myanmar by not engaging Military Junta and now in Pakistan.

What should be India’s stance hereafter? Our policy should be based only on one premise of safeguarding the national interest. We must talk and engage every stakeholder which suits our national interest be it civil or military or any other groups.

There can be no meaningful talk, until there is Pak Army on board. Talking to somebody like civil government of Nawaz and Zardari’s, who has no control on the situation is just an eyewash and is of little use.

India needs to plan a strategy in which the military from both sides are involved in talk. We need to have a constructive engagement from elements who are the real decision makers. There can be no better Confidence Building Measure then having a joint Military Exercise between India and Pak.

Pak military ethos and existence is solely based on anti-India rhetoric. Will they ever agree on giving up this larger than life role that they have assumed? It’s difficult but possible.