is a Civil Servant. Views expressed here are personal and do not reflect the thinking of the government. 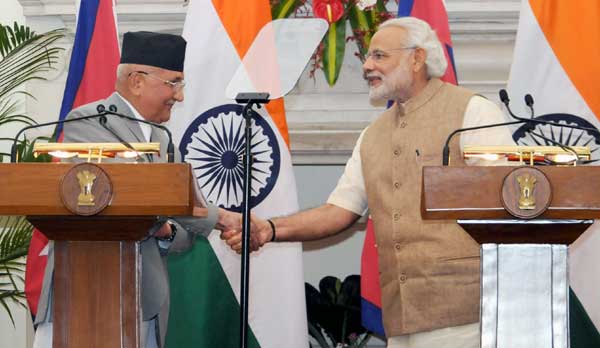 In his maiden state visit to India, Nepal Prime Minister K.P Sharma Oli emphasised that his visit was “to clear the cloud of misunderstanding” between the two neighbours. The misunderstanding emerged in the backdrop of Nepal’s adoption of new constitution with which India expressed strong reservations. Back in September 2015, Nepal promulgated the constitution that transformed the monarchical state to ‘federal democratic republic’, bringing to fruition a seven year-long constitution-making process that was marred by chequered history.

Compellence is a foreign policy strategy of making an opponent to change its behaviour and actions, often against its wishes, by using the threat of punishment.

However, certain key provisions of the constitution were vociferously opposed by ethnic minorities of the Terai region – the Madhesi, Tharu and other janjati communities. Together constituting over 50% of Nepal’s population, these groups contested clauses related to (i) citizenship acquisition, (ii) electoral representation in the National Assembly, (iii) non-inclusiveness in state structures, (iv) delineation of provincial boundaries and others. Historically, the Terai people have faced multiple forms of discrimination and are grossly underrepresented in state and public institutions. This existing alienation was further exasperated by the non-inclusiveness of the new constitution. Echoes of “pahad rashtravaad” – the continued political and socioeconomic dominance of the hill elites – were heard loud and reverberated.

Indeed, post-April 2015 earthquake, the constitution-making process was unusually expedited by mainstream political parties – Nepal Congress, CPN (UML), United CPN (Maoist) – who felt the urge to install stable government quickly. However, due consultations and consensus with the Terai constituencies apparently took casualty in the process. Disenchanted and raising suspicion over the power-sharing arrangements in the Constitution, the Terai people took to street protests against the regime. What followed thereafter was intensification of violence, instability and repression in the plains. Over 50 people have lost their lives in the violence since August 2015.

The ensuing turmoil brought the Indo-Nepal trade to a standstill as protestors blocked key trade routes. The Raxual-Birgunj corridor, along which over 2/3rd of bilateral trade occurs, was literally sieged on a daily basis by Madhesi protestors. India, a prominent stakeholder in Nepal politics, was taken aback by the constitutional developments. In fact, New Delhi had robustly aided Nepal’s democratic transition by brokering dialogue between the royalists and the Jan Andolan Movement of 2006 that put the constitution-making process at the first place. India has consistently suggested progressive democratic reforms which meets the aspirations of all sections of Nepal society, especially the Terai people who share ethnic ties with India.

The Nepalese leadership interpreted India’s nudging as unwarranted interference in its internal affairs. Worse, it blamed India for stoking turbulence in the Terai plains.

Evidently, it not only did not welcome the new constitution but instead urged the Nepalese leadership to heed to minorities’ demands for forming stable polity. Two days prior to promulgation of constitution, on September 18th, New Delhi even sent Foreign Secretary S. Jaishankar as PM’s Special Envoy to urge Nepal leaders to make amendments in the adopted constitution that would reflect ‘sahamati’ (consensus) of all stakeholders.

The Nepalese leadership interpreted India’s nudging as unwarranted interference in its internal affairs. Worse, it blamed India for stoking turbulence in the Terai plains. Nepal’s government alleged that India had imposed an “unofficial trade blockade” that was squeezing its economy. Its media complained victimhood of India’s ‘big brother’ behaviour and warned India of crossing red lines. As Nepal faced critical shortages of fuel, medicines and other essential commodities, public outrage and anti-India demonstrations magnified. At one point, the hashtag #BackoffIndia was trending top on the social media.

In an attempt to internationalise the issue, Nepal government officials highlighted to foreign media how India was preventing Nepal-bound trucks on its side of the border. They alleged that the Indian Oil Corporation has stopped delivering petroleum to Nepal owing to New Delhi’s pressure. Fuel and drug shortages severely crippled disaster relief efforts and several hospitals, including international aid agencies, were forced to cut back on medical rehabilitation. Asserting the international transit rights of land-locked country, Nepal’s Deputy PM Kamal Thapa raised the matter of trade “obstructions”, indirectly alluding to India, at the UNHRC meet in Geneva last November.

To outbid India’s alleged intrusiveness, Nepal began courting China for deepening economic ties. A slew of deals were initiated to open alternative trading routes to access Chinese ports and secure petroleum supplies, aiming to end Indian monopoly. In a rare televised address, PM Sharma Oli criticised India for causing humanitarian crisis through trade blockade which he termed as “unthinkable in the 21st century”, even while he welcomed Chinese assistance. It seemed the Indo-Nepal ties were headed towards an unprecedented downward spiral.

However, in a dramatic turnaround, the Nepali regime yielded to minorities’ demands and enacted two crucial amendments in January this year. These amendments satisfactorily addressed issues related – (a) ensuring proportional access to state structures (a kind of social justice measure for ethnic minorities); and (b) delimiting electoral constituencies based on population instead of geography as was the earlier case. India welcomed these developments and in February first week, trade at the Raxual-Birgunj border returned to normalcy. Rapprochement with India set afoot swiftly, with Sharma Oli’s maiden state visit wherein he pledged to uphold the historic relations with New Delhi.

What explains this remarkable resurrection in Indo-Nepal ties after months of high-decibel acrimony? Has India succeeded in forcefully persuading Nepal to yield to its demands? Conversely, was Nepal compelled to toe New Delhi’s line?

It is interesting to apply the “compellence” framework to assess if Nepal was coerced to change its tack. Compellence is a foreign policy strategy of making an opponent to change its behaviour and actions, often against its wishes, by using the threat of punishment. Analogically, it is making a state A to do X failing which it would face punishment Y. The state A yields to doing X because the costs of Y far outweigh the benefits of not doing X, although the latter may be against its interests. The punishment Y may range from enforcing economic sanctions, trade embargoes, downgrading diplomatic relations etc to anything short of veritable use of military force.

Despite the anti-India protests, international negative publicity and Chinese courting, New Delhi maintained consistency in its action of pursuing its demands.

In the recent Indo-Nepal turf war episode, the essential conditions leading to use of compellence are seemingly palpable. First, compellence requires clear articulation of demands to the target state. The demands must be rational, sound and doable, within the capacity of the target state to address them. India’s 7-point memorandum submitted to Nepalese leadership just before the promulgation clearly reflects what India wanted Nepal to do. These demands interestingly converged with the demands of the Terai minorities and thus carried some sort of legitimacy.

Second, political resolve of the actor imposing compellence must be unambiguously communicated to the opponent. In the final stages of constitution-making between June-September 2015, India held several high-level bilateral meetings that conveyed India’s position to Nepal leaders. Besides, at the consulate level, India held many rounds of dialogue with the United Madhesi Democratic Front – the political front of Terai protestors – demonstrating the degree of leverage it can exercise in influencing Nepal’s constitutional outcomes. Despite the anti-India protests, international negative publicity and Chinese courting, New Delhi maintained consistency in its action of pursuing its demands.

And finally, credibility of the threat of punishment is the most significant component of compellence. Although India stoutly denies that it was creating any trade obstructions, Nepal government persistently alleged that New Delhi was behind the blockade. Media reports confirm there is no evidence of any material support given by India to the Madhesi protestors. Nevertheless, they indicate that India was neither proactive in clearing trade obstructions along the border.

Though Chinese fuel supplies temporarily soothed the situation, in the long run it was considered unviable.

For instance, the Shasastra Seema Bal personnel deployed along the border discontinued the practise of escorting truck movements after the promulgation. Madhesi protestors occasionally spilled over into the Indian side of the Raxual-Birgunj bridge to hold on to demonstrations without being cleared. Though protests were brewing even in the months before promulgation and truck movements were smoothly occurring across the border, it was only after India decidedly threw against the constitution that cross-border trade became standstill. In any case, India’s moral weight to the Terai demands was unmistakably a shot in the arm for the ethnic minorities who were clamouring for justice.

The trade blockade had an adverse impact on Nepal’s industry and it reportedly suffered a loss of 400 billion Nepalese Rupees. Petroleum shortages forced the government to introduce fuel rationing for vehicles. Nepal had to go for mass cutting of trees for firewood to compensate for shortages of cooking gas. Lack of aviation turbine fuel hit the tourism industry as international flights scaled down their operations. Though Chinese fuel supplies temporarily soothed the situation, in the long run it was considered unviable. The rugged terrain makes it challenging for Nepal to open alternative supply routes or to access Chinese ports. China has reportedly planned to build new road/rail routes, but that is for the future.

India has pledged $2 billion line of credit (1/4th of which are grants) to aid Nepal’s reconstruction and there was a big question mark over this financial assistance if the bilateral relations soured. Surely, Nepal’s $20 billion economy could ill afford to miss the $2 billion assistance (1/10th of Nepal GDP) from India.

… for now, compellence seems to have worked in persuading Nepal to yield to India’s demands. For India to emerge as a global power, realist strategies like compellence are indispensable.

All these factors point out that the costs of Nepal not yielding to India’s demands far outweigh the benefits of sticking to its original constitution amidst continued domestic turmoil.

Given Nepal’s wide ranging dependency with India, it is imprudent and economically exacting to signal adversarial relations with India. Though India denies of imposing trade blockade, the Nepali regime perceived so and in diplomacy perceptions matter as much as facts. Perhaps, New Delhi’s plausible deniability was to avoid international censure. Nepal’s reworking of constitution is a positive development and one hopes the regime concedes to other pending demands as well.

Significantly, India has not yet wholeheartedly welcomed the constitution and has only “appreciated” the recent amendments. Whether more arm-twisting is in sight and fearing more adversities, Nepal may further budge only time will tell. But for now, compellence seems to have worked in persuading Nepal to yield to India’s demands. For India to emerge as a global power, realist strategies like compellence are indispensable. It is high time that New Delhi embraced political realism in its foreign policy discourse.