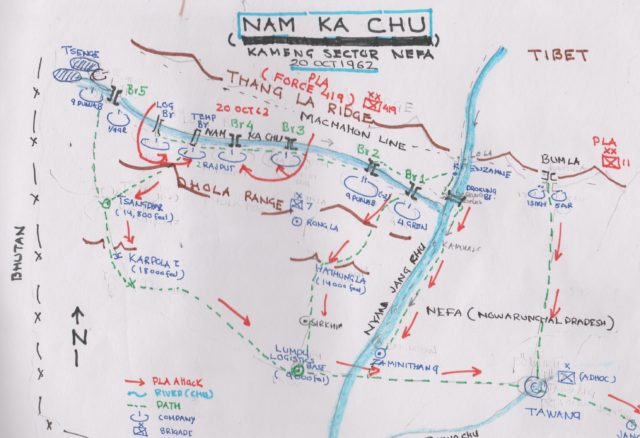 My name is Nam Ka Chu, my origin is from Twin reservoirs of Tsangle located at 17000 feet on the Tri-junction of Bhutan, Tibet and India. I flow in the west of District Kameng adjoining the Indo-Bhutan border in North East Frontier Agency (NEFA) about 25 kms north of Tawang town.  I am about 26 kms long and flow from West to East at a mild speed of 8 to 10 knots in the winter season and 15 to 20 knots in the monsoons. My width varies from 5 metres to 20 metres. My bed is full of rounded moss coated stones and a few big rocks in the mid stream. I finally merge in to my elder sister River Nyam Jang chu at Dorkung Samba bridge which, in turn, merges with River Tawang Chu.

Over the years, seven bridges have been constructed on my steep banks at a distance of about 3 to 5 kms from each other. These bridges were small Steel wire rope suspension crossings where only in single line formation, a foot column could cross. East to west, Bridge 1 is located at Dorkung west; Bridge 2 north of Ron la; Bridge 3 near Dhola; Bridge 4, Log  bridge, Temporary Bridge and finally  Bridge 5 on Tsanghdar and Tsangle track.

Let me go back a bit. Indian 7 Infantry Brigade had moved in on my southern bank and deployed from Bridge (Br)1 to Br 5 in late September,1962. 4 Grenadiers was occupying defences on Dorkung bridge on Nyang Jang river and Bridge 1. 9 Punjab occupied on Bridge 2 and Bridge 5.  Bridge 3, 4, Log Br and Temporary Br was held by 2 Rajput. 1/9 Gurkhas were holding defences at Tsangdhar Administrative base, Dropping Zone and Karpola 1 along with a troop of 17 Para Field unit. One company (Coy) was deployed in protection of Lumpu. Logistics base about 8 kms from Tawang.

As hostilities between the Indian and the Chinese built up I could hear the sound of digging defences throughout day and night. Small patrolling parties often come up to my banks to observe the northern side. These troops were tough  and brave but equipped with  Sten machine, 303 Springfield Rifles and Browning  Light Machine guns and had balaclava caps, OG  jersey and  Short Coat  Parkha. The cold winds continued blowing bringing temperature below20 degrees with wind chill factor.  The troops were on constant vigil but not fully aware of what was brewing on my northern side.

I was aware and worried as the Chinese Force 419 was marshalling on my Northern bank   on reverse slopes of Thangla Ridge with three Regiments (154 Regiment, 155 Regiment and 157 Regiment and an additional Regiment ex 11 Chinese Division (Please note one regiment is like a brigade with three battalions of 1000 troops each). There was massive Artillery and Engineers build up. The Chinese then built a CL 9 road up to Thang la. By 14 October 1962, they moved into Nyan Jang valley and deployed in forward assembly area. A force of 12000 PLA troops was ready and poised against an Indian brigade of 2000 soldiers.

None of the intelligence agencies i.e. IB, SSB and military Intelligence, including aerial reconnaissance missions knew anything about this build up. Defence Minister Krishna Menon had convinced Prime Minister Jawaharlal Nehru that it was a false alarm and that the Chinese will never attack. I however knew that the water level in the my lap was 3 to 5 feet at fords and was worried that Chinese may cross from river fords and not from Bridges, where Indian troops were focussed.

My worry was not unfounded, PLA troops infiltrated at 0100h silently between gaps in Indian posts and at first light of 20 October 1962, when the Sino-India War was declared  they had already crossed my River bed and attacked the 2 Rajput  company defended localities at Bridge 3; 4, Log  Bridge and Temporary Bridge.

Surprisingly, Tsangle garrison with 9 Punjab and 1/9  Gurkha  company in the west and 4  Grenadiers and  9 Punjab company troops at Bridge 1 and 2 were  not addressed by the Chinese.

Major B K Pant was the gallant company commander at Br 4, which faced the brunt of the Chinese 3 battalion attack. The company repulsed three waves of Chinese attacks with last man last round. In the end, when the company had suffered 75 percent casualties (82 out of 110 killed) the Rajputs fought with bayonets. All through the battle, Major Pant motivated his troops moving one trench to other. He was mortally wounded in his stomach and both legs. His last words to his men were, “Rajputs are born to die for the motherland. God has selected us to defend the blue water of Nam Ka Chu.”

Meanwhile, B Company at Log Br and C Company at Temporary Br were fighting another bloody battle with the Chinese multiple human waves. Lieutenant Subash Chander who was commanding B Company was also killed in close combat with the Chinese. Captain B.S Mangat (Adjutant) and Capt G.S. Bhatia, Vrc, also were mortally wounded. A company under Capt Ravi Eipe which was on Br 3 along with a platoon at Dhola post also lost 61 troops.

The most surprising factor was that most of the assaults were multi-directional including from the rear. The battalion headquarters was the last to be demolished. Major Gurdial Singh, MVC, led the HQ troops and inflicted heavy casualty on the Chinese. He was severely wounded along with commanding officer Lt Col M S Rikh, both were taken prisoners. The Rajputs fought valiantly but were finally over run.  4 officers and 278 gallant soldiers of 2 Rajput made supreme sacrifice and 81 were cortically wounded on that day within 4 hours of battle.  I had  tears in my  eyes  watching them  fight  and  my water  turning red  with gallant  Rajput  blood defending  frontiers of their  nation.

The battle shifted to Tsangdar where the Gurkhas fought valiantly and later their sharp Khukris  gave the Chinese a bloody nose, Troops of 17 Field fought bravely with their guns in open sight mode. They delayed the Chinese for a few hours before being overrun. The Punjabis and Grenadiers were outflanked and suffered heavy casualties at Hathung la pass. 7 Infantry Brigade ceased to exist within 48 hours and the commander, Brigadier John Parshu Ram Dalvi, was taken POW on 22 October. He later narrated the events in his book “The Himalayan Blunder.” Tawang Garrison was abandoned on 23 October. Se La defences disintegrated on 16 November and Bomdila fell on 18 November.

The War in Himalayas suddenly ended with China declaring unilateral ceasefire on 21 November 1962. PLA moved back to the Macmahon Line.