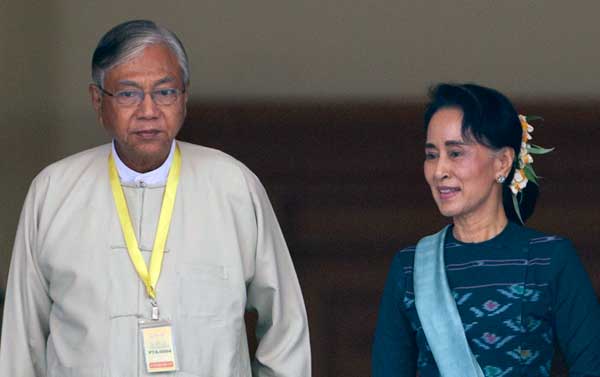 For India, the bilateral relationship is important for reasons that go beyond good neighbourliness. One, the India-Myanmar border region is a hotbed of militant/insurgent groups that pose security concerns for both countries. There also exist shared concerns over smuggling of contraband like narcotics and small arms by these militant groups and other players. Second, for New Delhi, Myanmar is not only a corridor of connectivity at the heart of its Southeast Asia outreach—Neighbourhood First Policy and Act East Policy—but is also relevant for developing India’s Northeastern region.

Both sides reviewed ongoing areas of engagement during the visit. As part of efforts to address the COVID-19 pandemic and in a display of New Delhi’s commitment to the neighbourhood, the Indian delegation presented a symbolic gift of 3,000 vials of Remdesivir to Suu Kyi. Myanmar expressed its appreciation of India’s decision to provide debt service relief till the end of 2020, under the G-20 Debt Service Suspension Initiative.

Sittwe Port in Rakhine State is expected to be operationalised in early 2021. The Centre of Excellence in Software Development and Training in Myitkyina was inaugurated virtually. Within the power sector, the possibility of High Capacity High Voltage Grid Interconnection was discussed. India has also proposed to construct a petroleum refinery at an estimated cost of US$ 6 billion in the Thanlyn area, near Yangon.

As one of the few instances where the Indian army chief and the foreign secretary have jointly undertaken an overseas visit, the significance is not only in composition but also the timing.

First, the upcoming election in Myanmar is important for stabilising the country’s nascent democracy, as well as charting its future political trajectory. Under the country’s constitutional and political framework, the November 2020 parliamentary polls will also set the stage for the indirect presidential election in March 2021—and thereby that of the next government.

Second, a quarter of the seats in the national and provincial legislatures are reserved for representatives of the armed forces, who are nominated by the Tatmadaw chief. At the executive level, the defence, home, and border affairs ministers are also appointed by the Tatmadaw. Given the military’s existing role in affairs of the state, a split mandate in November could accentuate the role the military’s role in the shaping the future, including the presidential election next year.

Third, the incumbent Suu Kyi-led administration’s initiative to address the decades-old ethnic conflict is still far from any meaningful resolution. As such, armed insurgent groups and a plethora of small ethnic political entities will be watching the elections closely. In an event of a split mandate in the parliamentary polls, the Tatmadaw could again play a key role, both on the matter of ethnic reconciliation and that of engaging ethnic political players.

Fourth, even though many in India view New Delhi’s engagement with Myanmar though the China prism only, this visit has reinforced the strength of bilateral ties. Given the host of issues that were discussed, the relationship is no longer limited to traditional processes but has taken the form of military-diplomatic engagement. For India, such an approach to Myanmar would not only insulate bilateral ties from possible domestic political shocks but also go on to institutionalise existing mechanisms that check against even external jolts in the future.

Much of the international community has held on to their adverse opinion about Myanmar from the days of the erstwhile junta; an opinion that was revived over the Rohingya issue not long after their favoured leader, Suu Kyi, came to power. Given this backdrop, India-Myanmar military-diplomatic engagement following the 1 October bilateral consultations between Shringla and U Soe Han is one, a reiteration of India’s commitment to bilateral ties, and two, a reassurance to India’s north-eastern neighbour of continuing in the same mode post polls.