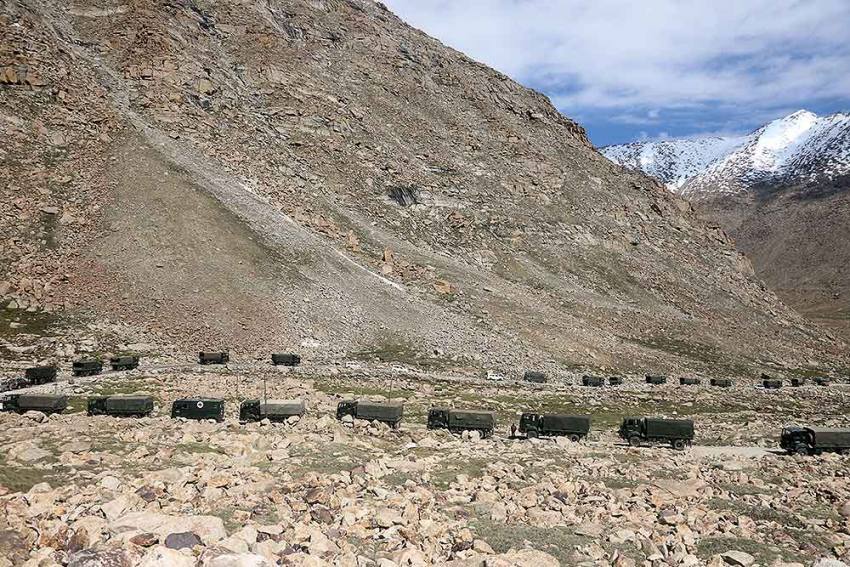 A few months ago, most analysts were convinced that the Chinese would never vacate the occupied areas. But several reasons compelled Beijing to change its stance.

A great deal has already been written by Indian experts on the decision by the Indian Army and the People’s Liberation Army to ‘disengage’ in Ladakh, starting from the vicinity of the Pangong tso.

Rajnath Singh, India’s Defence Minister stated in the Parliament: “As a result of our well thought out approach and sustained talks with the Chinese side, we have now been able to reach an agreement on disengagement in the North and South Bank of the Pangong Lake.”

Singh announced: “both sides will cease their forward deployments.”

It was agreed that the Chinese would keep its troop presence in the North Bank area to the east of Finger 8: “reciprocally, the Indian troops will be based at their permanent base at Dhan Singh Thapa Post near Finger 3. A similar action would be taken in the South Bank area by both sides.”

Many have doubted the sincerity of the Chinese and have suggested that even if the PLA withdraws, Beijing will somehow manage to return through a ‘backdoor’; to trust China is undeniably difficult; this is why the minister spoke of withdrawing “in a phased, coordinated and verified manner.”

After the Galwan incident on June 16 last year (on President Xi Jinping’s birthday) during which 20 Indian jawans and officers lost their lives, trust has been absent; incidentally, the Chinese casualties (probably around 45 killed) are still today a ‘State secret’ in the Middle Kingdom, while Col Santosh Babu, the commanding officer of the 16 Bihar regiment was awarded Maha Vir Chakra, the second highest decoration in wartime. With the prospect of new clashes looming large, both sides took the decision to ‘disengage’.

Though a few months ago most analysts were convinced that the Chinese would never vacate the occupied areas, several reasons compelled Beijing to change its stance as continuation of the confrontation could have made the Communist ‘core’ leader lose face further.

Before we go into the change of mind of Chinese leadership, it is important to understand the political background in the Middle Kingdom.

The New Emperor wants to project himself on the world scene as a man of peace; addressing the World Economic Forum in Davos, Xi Jinping recently affirmed that “the misguided approach of antagonism and confrontation … will eventually hurt all countries’ interests and undermine everyone’s well-being.” Xi proclaimed that “the strong should not bully the weak …we should stay committed to international law and international rules, instead of seeking one’s own supremacy.” Was he speaking seriously?

The Wall Street Journal sarcastically commented: “but that admonition doesn’t seem to apply to his own government.”

It was difficult for the Chinese president to sustain a war for a few hundred meters here and there in Ladakh, by mobilizing some 50,000 of his own troops at an altitude above 4,500 m with glacial temperatures, while promoting peace in the world.

In another recent speech, Xi mentioned his objectives: “time and momentum are on China’s side.” The new Great Helmsman believes in the ‘Great rejuvenation of Chinese nation’ led by the soon-100 years old Communist Party of China (CPC); he however cited challenges such as the Covid-19 pandemic, supply chain disruptions, deteriorating relations with the West or a slowing economy and he added: “The world is in a turbulent time that is unprecedented in the past century.”

Only the future will tell us if the ‘momentum’ is indeed on China’s side, but there is no doubt that the world is going through uncertain and difficult times.

Xi’s objectives point to the Two Centenaries, which refer to two anniversaries:, the CPC founding in July 2021, before which a fully ‘moderately well-off’ society will be achieved and the centenary of the founding of the People’s Republic of China in 2049 which will see a “strong, democratic, civilized, harmonious, and modern socialist country.”

A war with India does not presently fit into Xi’s plans at this point in time at least.

Uncertainty is bound to continue in 2021 and probably beyond, but during the present crisis, India has found reliable and unwavering support abroad (particularly from the US and France), this was also a factor which made Xi think twice before continuing the confrontation in Ladakh.

He was also certainly surprised by the firmness of the Indian Government which stuck to its guns and asked China to return to the pre-May 2020 positions; Delhi was clearly determined to fight even if it was for a few hundred meters in a few spots.

The resilience and the innate strength of the Indian jawans who adapted far better than their Chinese counterparts to the climatic hardship, must have shocked the Chinese leadership who still depends on bi-yearly recruitments (with China’s one child policy, who wants to send a son to the front?); perhaps linked to this, it is a fact that China’s medical casualties were much higher due to weather and high altitude.

Another shock for Beijing has been that the Indian Army has been deputed, through the Commander of the Leh-based 14 Corps, to conduct the negotiations. It is a first in post-Independence India; for most Foreign Service officers, negotiation is the Art of Compromise, but a soldier knows far better than a diplomat how a few hundred meters in a mountainous area, can be vital. The Indian military displayed patience, resolve and determination to return to the situation prevalent in April 2020.

It should also be mentioned that in recent years infrastructure development along the Northern borders of India have got an unprecedented boost; this must have irritated Beijing no end.

We also have to see the present disengagement in the historical context. Though knowing about the road being constructed by China in the Indian Aksai Chin as early as 1952-53, the then government in Delhi kept quiet; that inaction put the country in an inextricable situation.

On October 18, 1958, the Indian Foreign Secretary wrote an ‘informal’ note to the Chinese Ambassador in Delhi stating that it had come to Delhi’s notice that a road had been constructed by China “across the eastern part of the Ladakh region of the J&K State, which is part of India, …the completion of which was announced in September 1957.”

If Beijing had not announced the opening of the road, the information would have probably been kept secret longer by Delhi!

It says it all. To retrieve the situation from such an abyss requires patience, endurance and determination.

Hopefully a first step has been done, but utmost vigilance is the need of the hour.