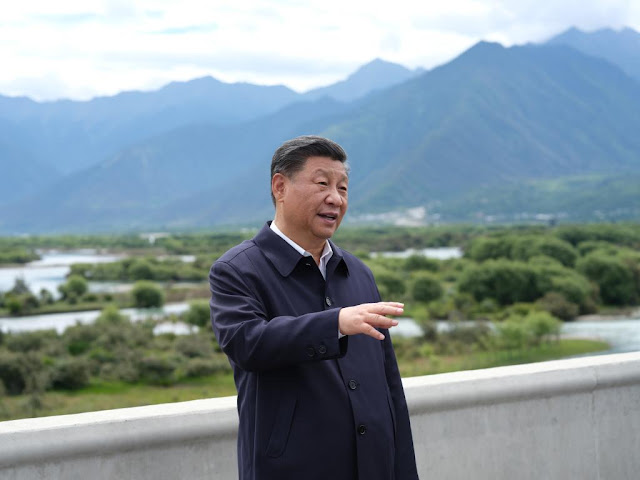 Xi Jinping visited Central and Southern Tibet after a gap of ten years. His objective was to ‘implement the party’s strategy for governing Tibet in the new era and write a new chapter in long-term stability and high-quality development of the snow-covered plateau’.

The last few weeks have been eventful as far as Tibet is concerned.

From June 21 to 23, Xi Jinping, General Secretary of the Communist Party of China (CPC) visited Central and Southern Tibet after a gap of ten years. When the Chinese president landed in Nyingchi City (previously called Prefecture), near the Indian border of Arunachal Pradesh, it immediately rang bells in the security establishment in India.

The China Daily reported about his stage-managed arrival: “He [Xi] was warmly welcomed by local people and officials of various ethnic groups.” Xi inspected the ecological preservation in the basin of the Yarlung Tsangpo River and its tributary, the Nyang River.

For India, this was an important part of the visit because first, the Chinese President was accompanied by Gen Zhang Youxia, Vice-Chairman of the Central Military Commission (chaired by Xi), and second, due to the proximity of ‘Bayi’ (which means ‘8-1 or August 1’, a term reserved to the People’s Liberation Army which was founded on August 1). Bayi is the Headquarter of the forces facing India in Arunachal Pradesh. Though no details have filtered, Xi was probably briefed about the situation on the border (a meeting with the PLA top brass of the Western Theater Command and the Tibet Military District was later organized in Lhasa).

The visit has to be seen in the context of the CPC’s 100th anniversary and the 70 anniversary of the so-called Liberation of Tibet (read ‘invasion’). The People’s Daily resumed the objectives of the visit: “to implement the party’s strategy for governing Tibet in the new era and write a new chapter in long-term stability and high-quality development of the snow-covered plateau.” This refers to the 7th Work Forum held in August 2020 which defined the development policies for Tibet for the five next years, particularly the sinicization of Tibetan Buddhism.

The Chinese President’s tour was hardly over, that another development took place in Delhi: on July 28 morning, US Secretary of State Blinken ‘briefly’ met the Dalai Lama’s representative Ngodup Dongchung during the former’s maiden trip to the Indian Capital.

Later photos of a meeting with members of the Indian ‘civil society’, attended by Geshe Dorjee Damdul, Director of Tibet House, the Dalai Lama’s cultural centre in Delhi were released. Confusion was created between the two meetings, because Dongchung was called ‘a’ representative of the Dalai Lama, while he is the ‘The’ Representative in Delhi. The US embassy should have certainly given the full name of the Representative, to avoid such ambiguity.

A couple of days earlier Wendy Sherman, the US Deputy Secretary of State had met State Councilor and Foreign Minister Wang Yi in China.

A State Department communiqué said: “The Deputy Secretary and State Councilor Wang had a frank and open discussion about a range of issues… [She] raised our concerns about human rights, including Beijing’s anti-democratic crackdown in Hong Kong; the ongoing genocide and crimes against humanity in Xinjiang; abuses in Tibet; and the curtailing of media access and freedom of the press.”

All this is fine and welcome, but one question remains: has India a Tibet Policy?

It is India that has long and tense border with Tibet from Demchok in Ladakh to Kibithu in Arunachal Pradesh; is it not high time for Delhi to have its own ‘Tibet’ Policy and start immediately engaging Dharamsala?

At first, Indian officials should meet the newly elected Sikyiong Penpa Tsering; it has not helped India to keep the relations with Dharamsala at a low key (or non-existent). Both India and the Tibetans need to seriously discuss several issues, whether of common interests or problems facing the Tibetan refugees in India.

The election of a new Sikyong Penpa Tsering as the head of the Central Tibetan Administration (CTA) is an ideal time to sit together.

Contentious issues, if any, should also be brought to the table (for example, why, nearly three months after the result of the elections, half the recently elected members of the Assembly of Tibetan People’s Deputies have still not yet taken the oath? Is there a Chinese angle behind this?). This should be frankly discussed (and not necessarily made public).

Several areas of Indian interests need to be discussed.

First, the recruitment of Tibetans in the People’s Liberation Army (PLA) and the Militia; it has been reported in the Indian media that China wanted to match India by raising a Special Force composed of Tibetans. It is doubtful if this can succeed as Beijing’s trust in the Tibetans remains extremely low, even 70 years after the so-called Liberation of Tibet (read ‘invasion), but Delhi should ascertain Dharamsala’s views; and the CTA should eventually issue a statement stating its views.

Exchanges should also take place about some aspects of the Tibet-Indian border, whether in the Eastern Sector (Arunachal Pradesh), Central Sector (Uttarakhand and Himachal Pradesh) or the eastern part of the Western Sector (Demchok area); what is Dharamsala’s historical take on these issues?

This is particularly important at a time when it has been reported that the Chinese have erected tents on the Indian side of the Charding Nala near Demchok in Ladakh. The Tibetans are certainly aware of their traditional border with India and can hopefully openly state their position.

Another area of interest (not to say worry) for India, is the demographic change on the Indian frontiers. Since 2017, the mushrooming of ‘model’ villages in Tibet, at the proximity of the Indian border, is disturbing; hundreds of ‘xiaogang’ (‘moderately well-off’) villages have come up in the last four years with a mixed population of Tibetans and Hans.

Further, the authorities in Tibet have started to entice the local Tibetan population to side with the Communist Party. A new formula can be found in every speech of the local satraps, the inhabitants of China’s borders (with India) should be “the protectors of the sacred homeland and the builders of happy homes.” Officially, this development is linked with ‘poverty alleviation’ and the ‘defence of the borders’.

There are other areas of common interests, for example how to communicate with the Tibetans inside Tibet? Once the Ladakh episode is over, Delhi should facilitate cultural contacts between Tibetans in India with those in Tibet and why not invite the latter for religious or cultural happenings in India.

Environmental issues are also of concern for India, particularly the mega hydropower plants to be developed by China on the Yarlung Tsangpo/Brahmaputra; what are Dharamsala’s views on this?

From India’s side, assurance should be given that Delhi will stand by the Dalai Lama’s choice for his succession.

Finally, a mechanism should be set-up for regular exchanges between Delhi and Dharamsala; centuries of close kinship between the Roof of the World and the Indic civilization cannot be erased just for political expediencies , or due to Beijing’s bullying tactics.