is an Assistant Professor at Christ University, Bangalore (India). He can be reached at anuragjnu@gmail.com 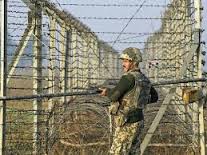 On October 26, 2015, a Junior Commissioned Officer (JCO) of the Army and two Hizb-ul-Mujahideen (HM) militants were killed in an encounter in Pulwama District of Jammu and Kashmir (J&K). Meanwhile, as nearly 3000 people migrated from border villages of Samba Sector finding no let up in heavy mortar shelling and firing by Pakistani Rangers.

Today India’s border with Pakistan has become a veritable gateway for terrorism into India. Despite the fencing across the border in Jammu & Kashmir, Pakistan has heightened its proxy war against India by ceasefire violation and infiltration of terrorists.

Despite the fencing across the border in Jammu & Kashmir, Pakistan has heightened its proxy war against India by ceasefire violation and infiltration of terrorists.

Through infiltration Pakistani militants sneak across the LoC/IB and then establish contact with an Indian counterpart and attempt to merge with the local population. Thereafter they familiarize themselves with the topography of the area, select a suitable target, plan their attack, and subsequently devise strategies on how to get away from the area to avoid capture.

The South Asia Terrorism Portal (SATP) data indicates at least 24 major infiltration routes active since 2003, along the LoC and IB in J&K. The Poonch district accounts for 10 such routes, followed by Kupwara with four, Samba with three, Jammu and Rajouri  two each, and Baramulla, Bandipora and Kathua one each.

Most of these routes fall along the 776 kilometer LoC.  However, the Indian Army’s active domination of the Line of Control (LoC), has prompted the Pakistan Army/ISI to activate infiltration routes along the International Border (IB).

The terrorists have reportedly taken to hi-tech, and are specially trained to negotiate the electrified border fence, as well as operate modern navigational aids like GPS and communication systems.

According to South Asia Terrorism Portal (SATP) data, though there was no infiltration related incident along the IB till 09 May 2008, while J&K has recorded 28 such incidents thereafter. Recently, on 20 March, 2015, a ‘fidayeen’ group of militants dressed in army fatigues stormed a police station in Kathua district, J&K killed seven persons, along with three security forces personnel, two civilian and two militants while injuring 12 others. On 28 March 2014, terrorists infiltrated through the Hiranagar area, along the IB, to execute an attack.

Indian intelligence estimates that 2,500 terrorists, being trained in 42 camps across Pakistan occupied Kashmir (PoK) and Pakistan, are ready to be launched into J&K, even as border disturbances to cover infiltration attempts escalate.

The Pakistan Army is reported to have activated launch pads to infiltrate terrorists from these camps, to boost the waning strength and morale of cadres active in J&K. The terrorists have reportedly taken to hi-tech, and are specially trained to negotiate the electrified border fence, as well as operate modern navigational aids like GPS and communication systems.

Infiltration attempts along the 190-kilometer IB have evidently witnessed a surge and, in response, on 15 December 2013, the BSF introduced state-of-the-art communication and surveillance systems, backed by bullet-proof bunkers and high-end infrared cameras, along the IB, to arrest cross-border infiltration. BSF has identified 19 sensitive and riverine areas and gaps along the IB on the Jammu frontier for installation of the high-end infra-red cameras and surveillance systems.

For Pakistani terrorists, there could have been four possible reasons for them to target Punjab through Gurdaspur district. Considering the last terrorist attack in Punjab took place on 01 January 2002 the security establishment had become complacent over a decade.

…the strongest possible measures will be required to prevent infiltration across the LoC/IB and to track and neutralise terrorists who manage to cross into Indian territory.

Therefore it is that much more feasible for an adversary to launch a surprise attack and meet with higher chances of success. While Pathankot has to be an obvious choice, infiltrator-terrorists are likely to avoid traditional routes and targets, choose locations which are not well fortified namely civil administration and government offices. In any case it has to be a rarely used route which is easy to infiltrate and sparsely populated.

Copiously, it is clear that Pakistan will continue its policy of supporting cross border terrorism in J&K, and enveloping regional trends suggest that a sharp escalation is possible in future. If the impact is to be contained, and in the absence of effective instrumentalities to force Pakistan to dismantle the infrastructure of terrorism on its soil, the strongest possible measures will be required to prevent infiltration across the LoC/IB and to track and neutralise terrorists who manage to cross into Indian territory.

It is high time for New Delhi to take corrective measures if it is not to allow J&K to plunge into a renewed phase of chaos reminiscent of, if not exceeding, disaster of the pre-9/11 situation in the state.